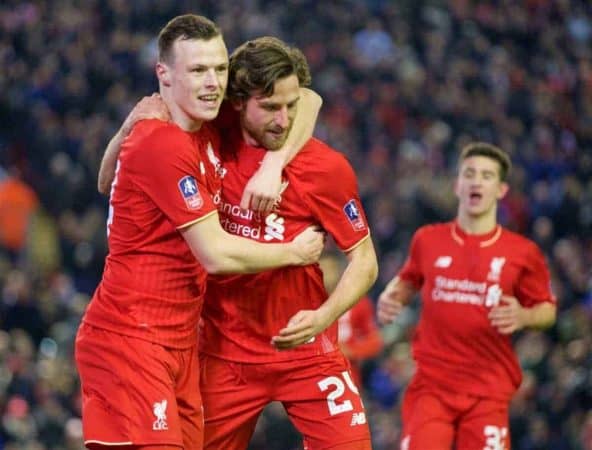 James Nalton was at Anfield on a cold night to witness Liverpool advance to the the FA Cup fourth round at the second time of asking thanks to goals from Joe Allen, Sheji Ojo and Joao Teixeira.

The names on the scoresheet summed up a well balanced team selection from Jurgen Klopp which helped The Reds overcome a spirited but scrappy display from Exeter.

Allen, Jordon Ibe and Simon Mignolet had come into the side to replace Ryan Kent, Jerome Sinclair, and Adam Bogdan who had appeared in the first game at Exeter.

The three added much-needed first team experience to the side in key areas, even though Mignolet didn’t have too much to do at his end of the pitch.

Fresh from signing a five year contract earlier in the week, he had spoken of his desire to become one of the leaders in the team.

“I know with a long-term contract you get more responsibility, and I want to take up that role,” he said. “I’m the sort of character that wants to be a leader, wants to speak in the dressing room and wants to help the defence.”

The goalkeeper was dealt an early blow when Jose Enrique, a peripheral figure at best, was handed the captain’s armband, but Mignolet wasn’t deterred and was vocal from the back throughout – maybe in an attempt to keep warm more than anything else.

Joe Allen controlled the midfield and always wanted the ball, while also making some good runs forward when the opportunity arose. His goal came from one of these runs earlier in the game when he slotted home from six yards following a ball from Brad Smith on the left.

Christian Benteke had been involved earlier in this move when he played Smith in behind the Exeter defence with a good through ball, but the number nine struggled to get into the rhythm of the match and wasted numerous opportunities to add a goal of his own.

He livened up later in the game and set up the third goal for Joao Teixeira, but when it came to finishing chances he was overshadowed by the younger players.

Sheji Ojo scored with an outstanding left-footed effort shortly after coming off the bench. Having taken the time to settle himself he effortlessly curled the ball into the top corner in front of The Kop, showing Benteke how it should be done.

The goal was appreciated by the Liverpool fans who’d been fairly subdued throughout. Perhaps they were still recovering from their ordeal against Manchester United on Sunday.

One of the loudest cheers of the night came when Jon Flanagan entered the pitch in the 51st minute. The substitution was a good one from Klopp as, despite an impressive start to the second half made by right-back Connor Randall, Flanagan offered more defensive discipline and would often stay back with the central defenders when the team were attacking.

Klopp thanked the supporters after the game, especially as they’d turned up knowing that they’d be seeing a second string side take to the pitch, but in some ways this experimental lineup is more entertaining than watching the first team.

The loudest support came from the Exeter fans, who had filled Anfield Road’s lower tier thanks to the extra allocation for away supporters in the FA Cup. This added to the atmosphere on a cold night, and the more goals they conceded the more noise they seemed to make.

An announcement made over the away end tannoy towards the end of the game thanked the Exeter contingent for their contribution to the game, but the their team couldn’t repeat the heroics from the first game.

Their players appeared to have less in the tank than they did on their own turf, but they still needed defeating and Klopp’s perfectly balanced team selection helped his side do just that.

Ibe was lively throughout on the right, while Smith continued to impress over at full-back on the left. Cameron Brannagan looked comfortable in midfield alongside Allen, while Teixeira was a level above many on the pitch in terms of technique.

Tiago Ilori controlled the defence with help from Mignolet behind him and Kevin Stewart did his best to provide protection to a rusty centre-back paring.

Whether these young players can make the step up to first team football remains to be seen, but these two games against Exeter will have been a useful experience, and one in which and some even outshone their first team counterparts.

By adding a little experience through the spine of the team – and with this being second appearances for the club rather than debuts – the likes of Stewart, Brannagan, Teixeira and Smith were able to put in composed performances, enjoying their big night at Anfield.