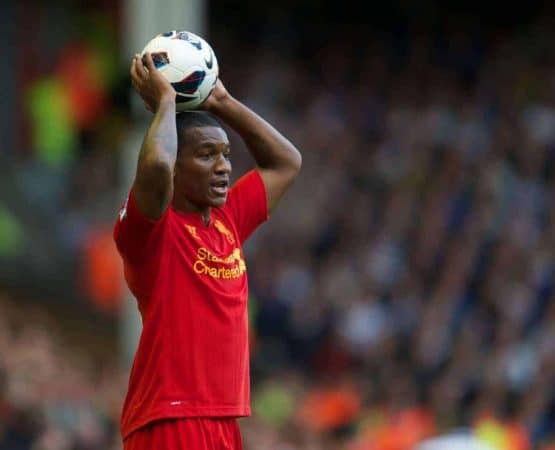 Rounding off our mid-season loan watch progress reports, we take a look at how Andre Wisdom has fared throughout the first half of his season-long loan with Norwich City.

After signing a new long-term contract at Anfield in the summer, it seemed Wisdom was set to become a permanent part of the Liverpool squad for the new season.

But despite committing his future, the 22-year-old was intead loaned to the Premier League newcomers for the duration of the 2015/16 campaign by Brendan Rodgers.

Frustratingly, it’s a move that has ultimately benefitted neither Liverpool or Wisdom thus far, with the Reds left desperately short of defensive cover and the loaned man enduring a difficult time in East Anglia.

Joining a Norwich squad with the simple ambition of surviving in the Premier League, it’s been a largely frustrating first four months at Carrow Road for Wisdom.

A combination of a lack of game time and injury have stunted the defender’s progression and limited his impact in his second successive Premier League season-long loan.

With boss Alex Neil remaining loyal to the majority of the group that fired the club to the top flight, and Scottish right-back Steven Whittaker remaining first choice for the majority, Wisdom has been a back-up option for most of the campaign.

He watched from the bench mostly, starting only one of the first 12 league games, restricted to League Cup action – in which he claimed an assist against Rotherham – and even U21 games to keep fresh, before eventually enjoying a spell in the XI as he made five consecutive Premier League starts at right-back.

The 22-year-old’s solid if unspectacular performances, including against Chelsea and Arsenal, saw him make the position his own, but it was for an all too brief duration with an ill-timed hamstring injury putting a premature end to his first run of games as he settled into the role.

Wisdom has not featured since mid-December due to injury, and in an unproductive first four months, has made only 10 appearances, though on a brighter note, has started nine of those and completed 90 minutes in eight.

Wisdom has provided a defensively strong presence when he has featured – registering the most tackles per-game of the Canaries defenders this season (2.3) – but has lacked offensively in Neil’s workman-like side.

Quotes from the Canaries

Speaking about what Wisdom will bring to the Norwich squad upon arrival, Neil said:

“I’m delighted as Andre fits our profile in terms of getting hungry players in who want to make their way in the game.

“In the past he’s played centre-back and right-back. Having added competition to the left-hand side with Robbie Brady, it was important to add something to the right side as well.”

Praising Wisdom’s form after entering the side, Neil said:

“Andre is someone I left out of the squad not so long ago. Now he is starting regularly at right-back.

“That is credit to him coming in and taking his opportunity. When you get your chance you have to perform as well as you can.”

Speaking in December on his desire to prove his capabilities at Carrow Road, Wisdom said:

“I am 22, which in football terms, is not that young nowadays. I am still learning but I am coming into my own now and trying to make the transition from that young, promising player with potential to a solid professional.

“My situation doesn’t really change. I came to Norwich at the start of the season to gain more experience and play more games so the objective stays the same.”

To get an insight into Wisdom’s season to date, we spoke to editor of Norwich dedicated site MyFootballWriter and Metro Sport blogger, Gary Gowers (@Gary_Gowers).

How would you assess Wisdom’s time so far at Carrow Road?

A little underwhelming if I’m honest. He arrived with a decent reputation but has played only a handful of games in which he did little wrong but equally did little to impress. He started off playing second fiddle to Steven Whittaker at right-back but, when his chance came it was short-lived – not helped by him getting injured – and Russell Martin is currently holding down that berth.

What have been the biggest strengths and weaknesses of Wisdom’s game?

He appears to be a decent defender and when tasked with the basics of quelling the threat of a wide man looks okay. Where it fell apart a little for him a tad was when asked to ‘join in’ – something Alex Neil demands of his full-backs. He certainly looks more comfortable when back-peddling than when being invited to attack – appears almost reluctant at times.

How have Norwich fans taken to Wisdom during his time at the club?

In truth he’s done little to endear himself to the City faithful by appearing fairly eager to return to Liverpool. Most loanees see their move as short-term and as just part of their ‘apprenticeship’ but the successful ones are often those who ‘buy in’ to their temporary home for the time they’re there. I can’t honestly say Wisdom has done that.

If the opportunity came for Norwich to sign Wisdom permanently, should this be a move the club pursue?

Not sure. It’s an area in which we need to strengthen – for definite – but, given his apparent preference to be a full-back that sits tight rather than join in in the attacking third, I’m yet to be convinced he’s a good fit for City. He’s clearly a decent player and at Liverpool he’ll generally be surrounded by better players – perhaps that’s part of the issue.

What are your hopes for Wisdom in the second half of the season? Can he make the right back spot his own again when he recovers from injury?

I expect him, at some stage, to get another chance. It’ll only work though if he fits in with Alex Neil’s requirement of a full-back who can operate as a wide midfielder when the opportunity arises.

Can you see Wisdom having a future at Anfield?

From what I’ve seen I’m not sure he’s the long-term answer for you guys at right-back, although nothing’s impossible. Surrounded by better players may well bring the best out of him, so it’s perhaps a little unfair to write him off just yet.

After a first half of the season of much frustration, Wisdom’s immediate priority must concentrate on returning from injury and regaining his fitness and match sharpness.

Thereafter, his aim has to be winning his place back in Norwich’s starting XI as soon as he can, but with him facing a battle to do that and Liverpool in the middle of an injury crisis, perhaps recalling the defender to deputise at Anfield would be a good move for all parties.

Whether on Merseyside or at Carrow Road, Wisdom certainly must have a more rewarding second half of the season either establishing himself at Liverpool, or producing consistent displays at his loan club, with him needing to prove his capability of performing at the top level as doubts over his long-term suitability continue to surface.

With time against the 22-year-old – who has so far struggled to make an impact for the second year running on loan – there’s a growing feeling that it’s very much now or never for the academy graduate to prove his worth.