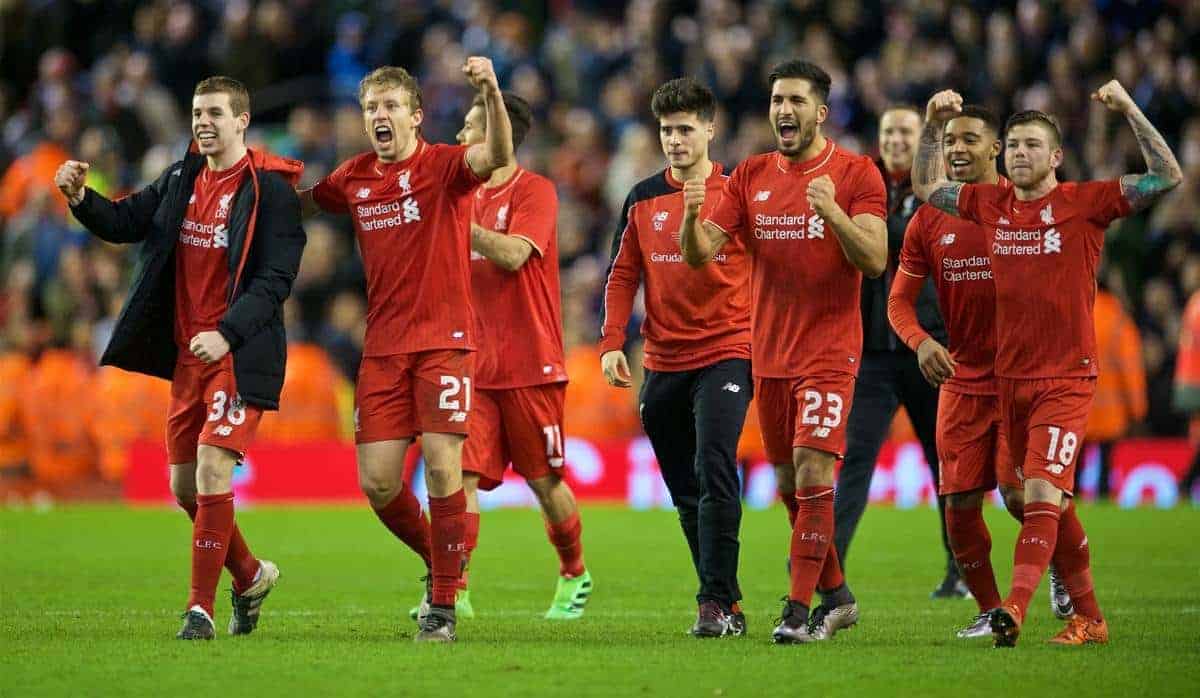 Liverpool needed a penalty shootout to secure passage to the League Cup final, after a dismal night of football at Anfield.

Jurgen Klopp‘s Liverpool will have needed no motivational tactics ahead of Tuesday night’s League Cup semi-final second leg, with the Reds desperate to secure passage to their first cup final of the season.

The German made two changes to the side that drew 5-4 with Norwich City on Saturday afternoon, following injury to Nathaniel Clyne and the return to full fitness of Adam Lallana.

Lallana came in for Jordon Ibe, while Jon Flanagan made his first start for the club in 626 days, lining up at right-back.

However, naming a strong side against a bullish Potters selection, Klopp will have been frustrated as the Reds left it late, with Joe Allen netting the winning penalty.

Liverpool began with a high-tempo pressing game, as Klopp’s 4-3-3 pushed Stoke high up the pitch, aided by the energetic Emre Can and Jordan Henderson.

Mark Hughes’ side looked to counter this with a direct approach, lofting long balls up towards Peter Crouch in attack, providing Mamadou Sakho and Kolo Toure with a significant test early on.

As the opening 20 minutes passed by, neither side created any meaningful opportunities, but a predatory Jonathan Walters soon had his first chance of the game, charging forward to latch onto a direct pass and fire just wide of Simon Mignolet‘s goal.

Thirteen minutes later, and Liverpool had their best chance of the half, with Emre Can blazing a long-range effort wide after a clever backheel from Roberto Firmino.

With Klopp placing heavy emphasis on Liverpool’s defending of set pieces before the game, he will have been disappointed to see the Potters go close after a wide delivery from a free-kick, but Crouch failed to convert from six yards out.

Much like the Reds’ recent 1-0 defeat to Manchester United, both sides spent much of the first half firing shots at goal from outside the area, with both Henderson and Ibrahim Afellay failing miserably in their attempts before the break.

The Austrian was in an offside position, but the goal stood, and Liverpool trudged in for the break having seen their lead cancelled out.

Klopp will have demanded a response from his side after the interval, and Liverpool came out the blocks from the kick-off.

Firmino came close just three minutes into the second half with a close-range effort, but Jack Butland was a match for the Brazilian.

Liverpool looked to keep up the intensity after a bright start, but sloppy passing from the midfield consistently let them down.

Less than 15 minutes into the second half, Klopp made his first change, throwing on Christian Benteke in place of Henderson, as he looked to push for a winner.

Benteke’s introduction saw Liverpool a more direct attacking approach, with James Milner coming to the fore on the right wing, and it was the vice-captain’s delivery from a free-kick that saw Sakho go close, but the Frenchman headed wide at the far post.

Flanagan almost capped his return in stunning fashion, finding himself in the perfect position to shoot after an Alberto Moreno cross, but the 23-year-old couldn’t get the ball out of his feet.

Liverpool were denied a penalty as the second half neared its conclusion with Erik Pieters’ handball adjudged to have been non-deliberate.

With neither side unable to score the decisive goal in the 90 minutes, Jonathan Moss blew for the end of normal time, and Klopp will have been disappointed with his side’s lack of fight.

Hopeful of forcing a winner in the second half, Klopp sent on first-leg goalscorer Ibe, who took the place of Flanagan.

This move gave Liverpool more energy in the final third, with Ibe dictating play with bright runs around the penalty area, but the 20-year-old struggled to conjure any dangerous openings.

In the end it went to penalties, with heroics from Mignolet and Allen securing passage to the final.