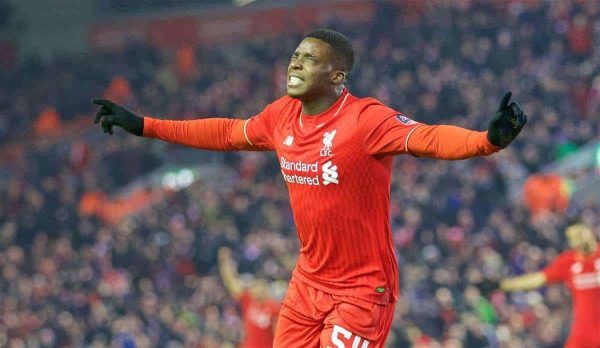 Liverpool beat Exeter City 3-0 at Anfield on Wednesday evening, with both Sheyi Ojo and Joao Teixeira scoring their first ever Reds goals.

Watch all the goals as @LFC see off @OfficialECFC in the #EmiratesFACup third round. https://t.co/BJzci8FNJM

Jurgen Klopp unsurprisingly made numerous changes to the side that lost 1-0 at home to Man United on Sunday, with Simon Mignolet the only player to keep his place.

Joe Allen, Jordon Ibe and Christian Benteke were the most experienced starters, while Jon Flanagan was named on the substitutes’ bench.

It was great news for the Englishman, who hadn’t featured in the first-team for nearly two years.

Benteke had the first chance of the game, with the Belgian firing straight at Exeter goalkeeper Bobby Olejnik from close-range.

The Reds were in front in the 10th minute, as Allen finished well following Smith’s precise cut-back. Klopp selecting a stronger line-up from the original tie had made an immediate difference.

Benteke had a wonderful chance to add a second shortly after, but he headed Teixeira’s cross over the crossbar with the goal at his mercy. He then dragged an effort harmlessly wide, and sent a header into the side-netting.

Olejnik made a decent stop from Brannagan’s bouncing shot midway through the first-half, and the young Englishman then fired narrowly over the bar from distance. It was all Liverpool.

Ibe once again forced Olejnik into a strong save, and like Brannagan earlier, the speedy winger then shot just over the bar.

It was a 45 minutes completely dominated by Klopp’s men, and Allen’s goal was the difference between the two sides at the interval.

Tom Nichols and Will Hoskins came on for the visitors for the second-half, replacing Clinton Morrison and Danny Butterfield, respectively.

Flanagan made his much-awaited return to the fray early in the second-half, receiving a wonderful reception in the process. He replaced Randall.

Ibe was desperately unlucky not to make it 2-0, with the 20-year-old thundering an effort off the underside of the bar and onto the goal-line, as Liverpool continued to boss proceedings.

Benteke, who endured another frustrating night, almost stole in to double the lead, but was thwarted by the impressive Olejnik.

The increasingly lively Ibe shot a few yards wide after a clever one-two with Teixeira, while Ojo replaced Allen in the 65th minute.

The 18-year-old scored a sublime curled effort in front of the Kop to score his first Reds goal, and put the game to bed in the process.

Teixeira put the icing on the cake with nine minutes remaining, following good work from Benteke, with the Portuguese finishing clinically to register his first Liverpool goal as well.

It capped off a very productive night for the Reds, who welcome West Ham to Anfield in the fourth round a week on Saturday.