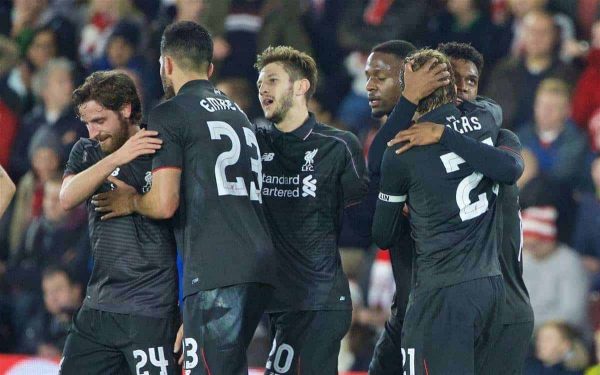 Questions are increasingly being asked about the mentality of Liverpool’s players. Neil Poole explains why this means we should prioritise the cups over the league.

Normally, I meet the question about which competition Liverpool Football Club should prioritise with justifiable short shrift. I go full jingo and declare, “We should aim to win them all!”

However, it dawns on you that the season has taken a turn for the worse and such cocky swagger is misplaced when you find yourself spending the weekend hoping Watford, Stoke and Crystal Palace drop points.

It’s bad enough that teams of this ilk are now our peers, but it’s even more galling when, in two of these instances, their rivals were Manchester City and Chelsea.

City will finish in the top two. We’re getting nowhere near them so their points haul is now a depressing irrelevance rather than a viable challenge.

As for Chelsea, our ten point cushion over them at the time meant we were afforded the luxury of the Stamford Bridge horrors doing us a favour by beating Crystal Palace. The second half of that last sentence may be the most unpalatable thing I’ve ever written. I apologise.

A swift look at the subs bench against West Ham and the fact that players currently need to pick a ticket and wait three months before they can even squeeze into the packed treatment room at Melwood demonstrates we simply haven’t the bodies to compete on all fronts.

Injuries, misguided player recruitment, the subsequent lack of opportunities for rotation and the sheer number of games is the antithesis of the stars aligning and more like death stars colliding.

Something has to give. And for me it’s the league.

I’m aware this goes against the popular party line, and personally I’d normally prioritise the league above all else too. But I draw the line when prioritising the league over cups this season will have as much success as prioritising eternal life over going through 2016 without catching a cold. One is impossible the other is tricky; I favour the latter option.

Go for it and quote Bill Shankly’s love of bread and butter until you’re blue in the face but we’re not going to win the league and we never were. And if we were to lower the bar to what we mean by ‘the league’ to a top four place, well let’s be honest we’re not really talking about the league anymore, we’re talking about the Champions League, which is more ciabatta and olive oil than bread and butter.

However, the reason that we’re not good enough to make the top four may also hold the key to why we actually have a fighting chance to win one of the three cups on offer. While the aforementioned injuries and lack of quality depth and crammed fixture list undoubtedly lead to a level of fatigue which effect results, it doesn’t paper over the cracks of the lack of an insatiable desire to win.

Just like the games against Newcastle and Watford, it was clear to see within ten minutes of our game against West Ham that our opposition simply wanted it more. Our players were hardly leading against the goal posts and whistling while they surveyed the latest edition of ‘The Mercenary Times’. However, they distinctly lacked the requisite edge.

I don’t believe these players are as mentally fragile as made out. I think they simply suffer from a malaise that has afflicted many Liverpool players over the last two decades, which when it comes right down to the nub of it is they’re just not that bothered.

As we’ve seen again and again this leads to a trend in which our players play to their full capacity only when the stakes are raised. Our best performances under Klopp have come against league title favourites Man City, league champions Chelsea, and league leaders Leicester. We can also throw in a game against Southampton when the prize was a semi-final in a cup and the first tangible potential of silverware.

As cynical as this may sound, I can’t help but equate such a trend of turning it on for games we know we can’t take for granted and failing in the ones against mid table sides with arrogance rather than mental fragility. With the exception perhaps of Sturridge, none of our players are good enough to take their feet off the gas and consistently win games for Liverpool.

There has to be a reason why we haven’t won three league games on the spin for coming up to ten months. We’re currently a team unable to consistently navigate the ebbs and flows off this league. The reasons are multi-faceted but a key one is the attitude and approach of players who willingly cherry pick games.

This is why we have more of a chance in the cups, where consistency is not quite as vital. Yes, if we lose a game we’re out, whilst in the league a defeat isn’t as visibly final. However, maybe that’s the very jeopardy and risk needed to stimulate many of our players, to make them that give that extra 5%.

At the end of the day if you believe winning any of the three cup competitions means nothing then nothing will persuade you otherwise. I mean for god’s sake, in every interview I see with Klopp he keeps calling it the Carling Cup! I love the fella but he doesn’t even know what the f*king thing is called! Such a fact is less a nail in the coffin of the competition’s irrelevance but more a nail in the thin air where the coffin used to be.

I don’t feel this way. I like to see Liverpool win any silverware. It’s been a while. And in a remainder of a season where Klopp has to get the best out of the resources at his disposal, then the disposition of our players is better suited for the tightrope of a cup competition than the long hard slog of a marathon.