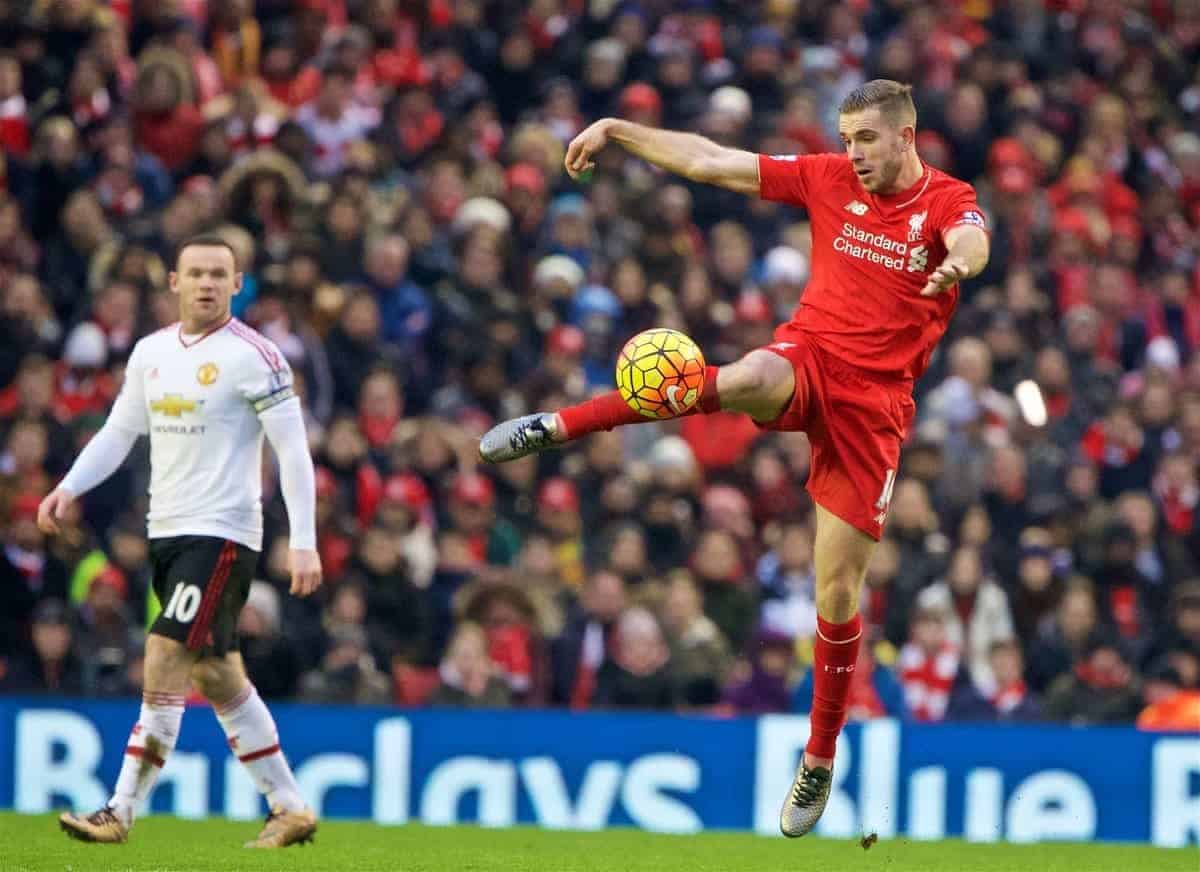 As Liverpool slumped to a home defeat against their bitter rivals – one which has consequences far beyond the bragging rights up for grabs today – here are some areas of discussion which cover passion, pride, profligacy, and points totals.

Is there enough derby passion?

A certain mentality is required to be successful in any football match at the top level, but desire, determination, and an understanding of the game is even more important in a fixture such as today’s.

Understanding this fixture is as much about channeling any aggression in such a way that it gives an edge over the opponent; fire in the belly but ice in the mind.

Bar Emre Can who, incidentally, was unlucky not to score, no-one in the Liverpool side today was able to do this, and it showed as they fumbled around in the final third unable to put the ball in the net.

As a the famous old line goes: If you can keep your head when all about you are losing theirs, you’ll win a derby my son.

The ghosts of set pieces past, present and, more prominently, the ghost of set pieces yet to come, continue to haunt Liverpool’s 18-yard box.

Lucas and Sakho had dealt comfortably with Marouane Fellaini for the whole game, but as he rose above everyone to head onto the bar from a corner, the defence froze and allowed Wayne Rooney to score yet another goal which makes him appear better than he actually is.

Simon Mignolet had a sit down on the grass as the ball came off the bar, while four defenders were drawn to Fellaini and in the process forgot about the possibility of having to win a second ball.

The second ball fell to Rooney and Anfield fell silent, apart from that corner of the ground who, for once, won’t be complaining much about Van Gaal’s tactics.

Liverpool had 19 shots during the game, but only four of these were on target.

Captain Jordan Henderson was particularly culpable in this area of the game, and of his five efforts on goal the only one on target was side-footed tamely into the arms of David De Gea.

Shooting wasn’t the only reason for this poor showing on front of goal, however. Some sloppy build up play, poor decision making, and untidy dribbling saw Liverpool regularly fall apart in the final third.

Roberto Firmino, James Milner, Adam Lallana, and both full-backs can all take some of the blame here and, once again, only Emre Can emerges with any credit in the bank as both his shots tested De Gea.

The lack of goals from attacking players such as Adam Lallana and Jordon Ibe in the league this season is especially worrying, and given the injury problems up front, these are the players who are required to contribute for the side to be successful.

Adam Lallana & Jordon Ibe now 0 goals in 36 EPL appearances this season, 5 in 54 in all competitions

No Impact from the bench

The fact that £32.5m worth of Belgian brawn remained seated on the bench for much of this game demonstrated how Christian Benteke is viewed by those who pick the team.

On entering the pitch on the 81st minute the number nine did little to persuade anyone that leaving him out is the wrong decision.

Joe Allen, who made a great impact after being brought on against Arsenal on Wednesday, could have been the man to add an element of control, and maybe even bag another goal as he did in midweek, but he didn’t get a look in.

Instead, the manager turned to Steven Caulker to make his second appearance up front for Liverpool.

If a centre-back signed on an emergency loan in January is being used as a centre forward in a game the club need to win to mount a top four challenge, then something has gone seriously wrong in the recruitment department somewhere down the line.

It’s now up to the new regime, led by Klopp, to sort this out. Let’s just hope Nathaniel Clyne doesn’t get injured while he does…

Derbies can often be games where not losing is as important as winning, but today the game also had repercussions on the league table, and more importantly the Champions League places, on top of these local bragging rights.

It turned out that the game was a six pointer in more ways than one, as that’s now the gap between the two sides in the table, but Manchester United are still only fifth.

Liverpool are now eight points behind a fourth placed Spurs side who look to be having a serious run at the top four under the impressive management of Mauricio Pochettino, making the coveted fourth place seem a long way off.

If there’s hope, it lies in the cups, but if the side can keep plugging away in the league as they now have little to lose, who knows what might happen…