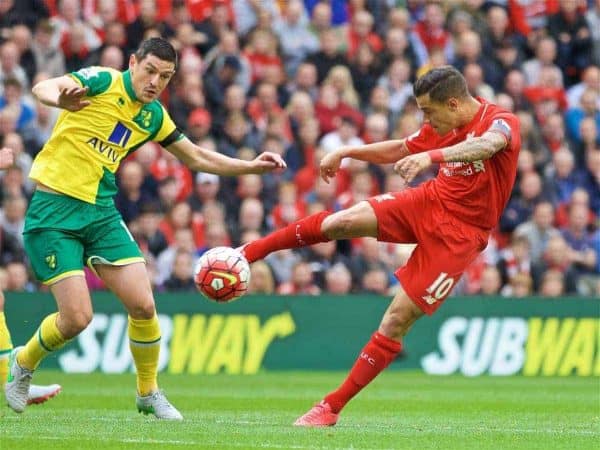 Liverpool return to Premier League action when they take on Norwich City at Carrow Road in Saturday’s lunchtime kick-off.

After sealing FA Cup progression, Liverpool look to build on their midweek cup win with a first Premier League victory since the turn of the year against Alex Neil’s Canaries.

The Reds prepare to pick themselves up again after the season-derailing defeat to Man United last weekend ended realistic hopes of a top four finish, leaving Klopp’s side to turn their attention to claiming silverware for the first time since 2011.

The Reds at Carrow Road

Liverpool have enjoyed pure dominance of this fixture, unbeaten in over 20 years against the Canaries since the 1-0 loss in the Kop’s last stand in 1994.

The Reds have won nine of 11 meetings since that forgettable afternoon, including enjoying a brilliant recent record at Carrow Road, winning on all of their last five trips.

The situation Klopp’s side arrive in is in sad and stark contrast to that of the last visit, when Brendan Rodgers’ title chasers arrived sat top of the Premier League table.

A typically blistering attacking display but lacklustre defensive performance saw the Reds eventually extend their lead to five points, with Luis Suarez and a brace from Raheem Sterling sealing a 3-2 win.

This season’s reverse fixture in September finished 1-1 at Anfield with goals from Danny Ings and Russell Martin, but with Liverpool in desperate need of victory, Klopp will hope Carrow Road proves a happy hunting ground again for the Reds.

It’s been a tough season for Norwich on their return to the Premier League, as they lurk dangerously above the relegation zone in 16th place.

A lack of consistency has plagued the Canaries, typified by their recent run of form – three wins, three losses and a draw from their last seven matches.

Neil’s men arrive following successive defeats, but look to call on their positive home form that has seen them win 11 points from the last possible 15.

Liverpool are winless in three games and in need of a win that will spark an upturn of form, but Klopp’s side need to improve on the single goal they’ve notched in their last four away games.

The Reds have won once in their last four on the road and have found goals equally as hard to come by as Norwich, suggesting the fixture that has seen 15 goals in the last three Carrow Road meetings could instead be a low scoring affair.

Alex Neil comes into the clash with no injury concerns and a clean bill of health as he attempts to steer his side to safety.

One player the Norwich boss will be without, however, is Andre Wisdom, who is ineligible to feature against his parent club, while Gary O’Neil is also out with the midfielder serving the second of a three game suspension.

£8.5million signing Steven Naismith is in line to make his Canaries debut after joining from Everton, and Neil could also hand first Norwich outings to fellow new arrivals, Timm Klose and Ivo Pinto.

Cameron Jerome, Nathan Redmond and Graham Dorrans entered as substitutes in the 3-0 defeat at Bournemouth last weekend and are pushing for starts.

The Canaries boast the third worst defensive record in the league, and plenty of movement and pace against the Norwich backline could prove too much for the home side to handle, leaving Liverpool needing to find their goal-scoring boots.

“You look at the table and think 18points, not so good, but they [Norwich] are creative and quick.”

“Everyone could see against Exeter he [Benteke] was involved in two of the three goals. He’s working hard and his attitude was really good.”

“There’s nothing to say about this [Teixeira links]. It’ not the perfect time to buy but we have to watch the market. If we find a solution and a player who can help us then we’ll try.”

Prior to the Reds’ visit, Neil said:

“Jurgen Kopp has brought his own style of play. They’re trying to find their best combinations.

“They’re more direct now and they play higher up the pitch. This game will be different to the one earlier in the season.”

Saturday’s lunchtime kick-off in East Anglia will be shown live on BT Sport One in the UK, with the match also to be broadcast on the usual channels around the globe, including SuperSport, NCBSN, FoxSport and Canal+.