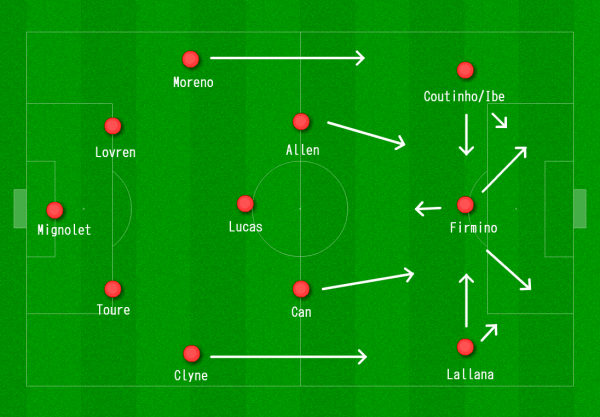 After his use of a 4-2-3-1 saw Liverpool produce solid, compact performances against Leicester City and Sunderland before the turn of the year, injury to Jordan Henderson saw this stability dissolve against West Ham United on Saturday afternoon.

Reacting to this brilliantly against Stoke in Tuesday’s League Cup semi-final first leg however, Klopp may have struck upon the ideal formula.

Just as they did at the Etihad Stadium, Klopp’s attack operated with fluency and fluidity in the opening stages.

Injury to Coutinho, however, saw the German introduce Jordon Ibe and, much to supporters’ relief, Liverpool continue their dominance, with the 19-year-old taking up a left-sided role.

Pushing forward from midfield, both Emre Can and Joe Allen made a strong influence in the final third, with Lucas Leiva‘s diligence in the holding role allowing them the freedom to probe further afield.

Allen’s overlapping run providing Liverpool with a perfect opening on 38 minutes, finding himself in the box to capitalise on a Lallana cutback and supply a dubiously intended pass for Ibe, who hammered home to give the Reds the lead.

As Mark Hughes sent on a host of lofty forwards in the second half, however, with Jonathan Walters, Joselu and Peter Crouch all making their way onto the field, Klopp showed his pragmatic side.

After a dismal performance at the Boleyn Ground on Saturday, Christian Benteke warranted being dropped from Klopp’s starting lineup, and Liverpool benefited without the presence of the lethargic, hulking Belgian.

But with Stoke resorting to long-ball tactics and Liverpool looking to hold on to their slim lead, Klopp sent Benteke on with 10 minutes to go, replacing Allen.

With Lucas having moved into defence to accommodate Dejan Lovren‘s hamstring injury, Liverpool shifted to a rigid 4-4-2 formation.

This saw Lallana and Ibe in particular take up more defensive duties on the flanks, while Firmino dropped deeper to support Can and James Milner as Klopp’s midfield two.

Benteke’s bullish frame gave Liverpool the perfect outball and, though he may covet a more important role, the 25-year-old looks more likely to be an effective ‘plan B’ for Klopp than a first-choice No. 9.

After being outmanoeuvred by Slaven Bilic on Saturday, Klopp worked his tactics to perfection in the League Cup.

Liverpool can now head to Anfield buoyed by a 1-0 lead, with a Wembley final awaiting the eventual winner.