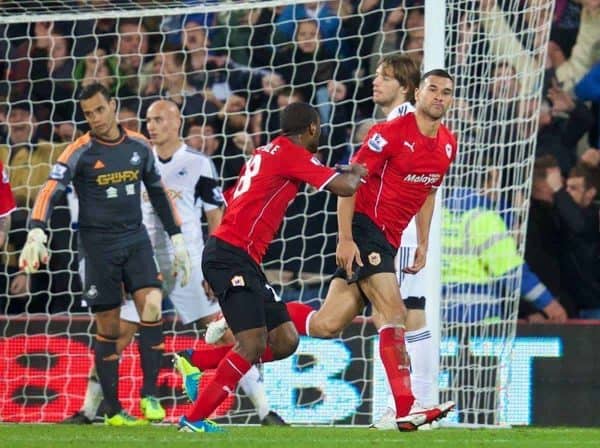 Steven Caulker has joined Liverpool on loan until the end of the season, and we look at how the 24-year-old could help solve the Reds’ Achilles’ heel.

Caulker’s transfer was confirmed on Tuesday afternoon, with the Englishman joining from Queens Park Rangers until the end of the season.

It isn’t necessarily the most earth-shattering piece of business that Liverpool will ever do, but it could well prove to be a clever signing by Jurgen Klopp.

Notably, the ex-Tottenham man fares well when comparing the Reds’ other centre-backs in an area where they have often struggled in recent times.

As seen throughout his time in the Premier League, Caulker’ aerial prowess a key feature of his game.

Liverpool have become one of the most susceptible sides in the Premier League when it comes to defending crosses, but this is where Caulker should hopefully have a positive impact.

In 2014/15, for example – it is hard to compare this season, because he has only featured sporadically – he won an average of 4.4 aerial duels per game.

That is better than any of Mamadou Sakho, Martin Skrtel, Dejan Lovren and Kolo Toure, who have all been guilty of playing their part in Liverpool’s set-piece horror-show.

A lack of errors was also evident while Caulker played for a soon-to-be-relegated QPR side last season.

Though Caulker will be required to adopt a more nuanced, all-round game under Klopp, the Englishman’s aerial ability will be a welcome addition to the Liverpool defensive line.

Importantly, Caulker is able to organise those around him, having captained Cardiff City throughout the 2013/14 season.

During the Bluebirds’ solitary Premier League campaign, Caulker scored five goals, and his ability to guide home set pieces is another welcome facet at this stage of the season for Liverpool.

Though something of an underwhelming signing for Liverpool supporters, Caulker’s attributes could give Klopp’s squad an edge in both defence and attack.