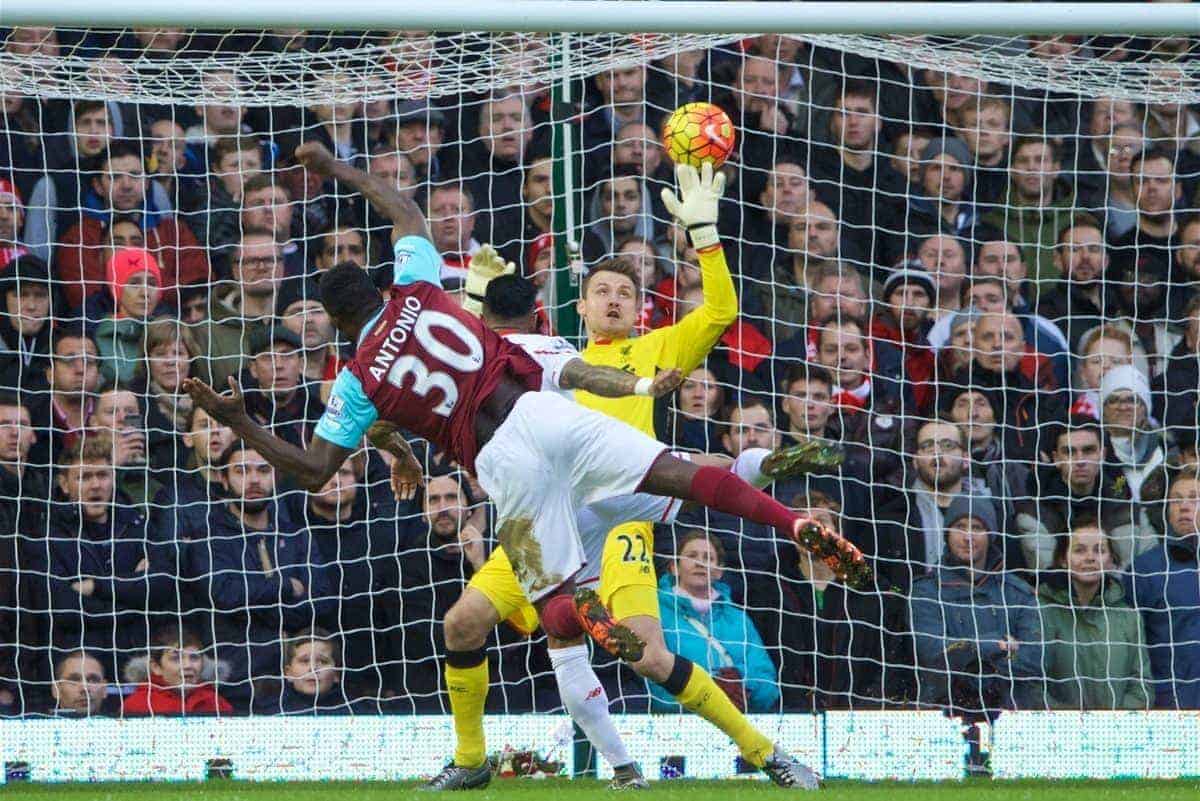 A lifeless Liverpool were deservedly beaten 2-0 at West Ham on Saturday lunchtime, with former Red Andy Carroll among the scorers.

There were two changes to the side that won 1-0 away to Sunderland on Wednesday evening, as the Reds faced a tricky Hammers outfit in east London.

Jordan Henderson was missing through injury, with Lucas Leiva coming in to replace the captain, while Jordon Ibe was preferred to Adam Lallana.

Ibe very nearly opened the scoring in the fourth minute, following a slick move, with the 20-year-old firing an effort just wide of Adrian‘s goal.

It was West Ham who struck first, unfortunately, with Michail Antonio powering a 10th-minute header past Simon Mignolet.

It was all rather soft from Liverpool, with Lucas and Nathaniel Clyne both culpable. Alberto Moreno had been fouled at the other end, but it was still no excuse for the level of defending.

A sensational strike from Manuel Lanzini hit the post shortly after, with Jurgen Klopp‘s side a complete mess at the back.

The visitors’ overall performance was a shambles in the first-half, with a lack of fight once again worryingly evident.

Emre Can‘s stoppage time effort hit the top of the crossbar, but that was almost all they could muster in the opening 45 minutes.

A huge improvement was called for after the break.

There were no changes at half-time, but the fact that Klopp sent his players out early to warm-up spoke volumes about his thoughts on his team’s display.

There was more urgency about Liverpool in the early stages of the second-half, with plenty of possession and half-chances created.

Despite this, it was 2-0 10 minutes into the second-half. Carroll predictably powered a header past Mignolet, as the visitors’ woes continued.

Klopp made a double substitution on the hour mark, with Roberto Firmino and Moreno replaced by Lallana and Brad Smith.

Any zip that Liverpool had in the early stages of the second-half disappeared rapidly, and it became far too easy for West Hame to see out the game.

Carroll almost scored his second goal to completely kill off the game, but Mignolet did well to thwart the big striker.

Lucas saw a header cleared off the line, while a couple of debatable handball shouts were turned away by referee Robert Madley.

Liverpool never really looked like they would threaten to find a way back into the game, though, and it all petered out in the end.

It was yet another terrible performance and result against what should be inferior opposition.