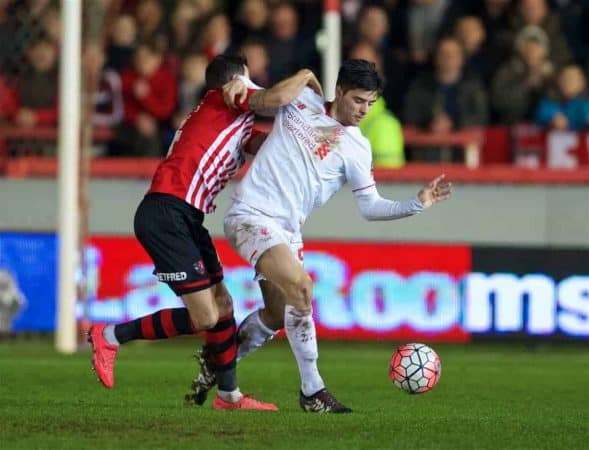 We will do everything to progress, says Klopp – Liverpool vs. Exeter Match Preview

Liverpool turn their attentions back to the FA Cup on Wednesday night as Exeter City arrive at Anfield for the third round replay.

Jurgen Klopp’s Reds take a break from Premier League action as they attempt to overcome the Grecians at the second time of asking.

There’s an added pressure on the tie for the Reds who now need to ensure of cup progress to keep a faltering season alive with the league campaign all but over.

Klopp is set to give the youngsters another chance to secure a place in round four at Anfield, but the talented prospects must step up to the occasion with Paul Tisdale’s side having already proven a battling outfit to see off.

Wednesday night will see the seventh meeting between the two clubs, who lock horns for the second time in 12 days.

Liverpool had won all five of the games prior to the first tie 2-2 draw at St James’ Park – a night that saw Jerome Sinclair and Brad Smith notch their first goals for the club in response to Tom Nichols’ and Lee Holmes’ strikes.

The two clubs meet at Anfield for the first time since the Reds beat Exeter 5-0 in the League Cup in 1981, with goals Terry McDermott, Kenny Dalglish, Ronnie Whelan and a brace from Ian Rush doing the job in front of a sparse 11,500 crowd.

The Reds have won all three previous Anfield clashes in comfortable fashion – the last FA Cup success being one of those with a 3-1 win in 1950.

Klopp’s side search to continue Liverpool’s dominance in this fixture against their Football League opponents.

Exeter come into the replay in much better form than they entered the first tie 12 days ago, unbeaten since the eventful draw.

The fourth tier side have drawn and won their two games since the first meeting, including claiming an impressive 3-1 win at play-off chasers, Leyton Orient, on Saturday to move themselves to 14th in the table.

Including the stalemate with Klopp’s men, Tisdale’s side have not tasted defeat in three games, ending a poor run of four straight defeats in positive fashion, which will see the Grecians arrive in confident mood.

The Reds continue to disappoint and frustrate as they struggle to find any consistency with performances and results.

Liverpool have yet to win since the score-draw nearly a fortnight ago, collecting a draw and loss from their two games since, leaving the Reds searching for just their second victory of 2016.

Progression to round four of the competition for Liverpool, who are naturally heavy favourites, is priced at 1/14 with a cup-shock for Exeter valued at 13/2.

Long-serving Exeter boss, Tisdale, could name the same XI that forced the Reds to a replay at St James Park.

Previously injured trio Rory McAllister, Christian Ribiero, and Lee Holmes – who notched in the first tie – are all fit to feature, while Danny Butterfield is in contention to start after returning in the win at Orient having been out since November.

However, Bournemouth loaned striker Jayden Stockley, who notched on his debut, is unavailable for the game due to being cup-tied.

After failing to keep top scorer Tom Nichols under wraps in the first-leg, the Reds will have to ensure the striker – who has been the subject of a bid from an unnamed higher league club – is more closely monitored.

Exeter are set to be roared on by a 6,000 strong travelling support for their first Anfield trip in 35 years in which they’ll look to register a historic first success over the Reds.

Ahead of his first Anfield FA Cup clash, Klopp said:

“We will do everything [to progress].

“I can tell you, if someone thinks we’re playing with the team we will play because we don’t think the FA Cup is the most important competition it would be the biggest misunderstanding in the world.

Prior to leading his Grecians to Merseyside, Tisdale said:

“As much as we were delighted with the draw [in the first match against Liverpool], it was tinged slightly by the fact that we had the lead with fifteen minutes to go.

“We’re all very proud of the way the club conducted itself in that first game, and there will be six thousand Exeter City supporters going, so we’ve all got to enjoy it.

“We just have to accept that we are playing against eleven Liverpool players, no matter who they are, but we go in positive and with nothing to lose.”

Contrary to initial information, the Anfield cup clash will be shown live in the UK on BT Sport Two, with the game available around the globe on the usual channels such as NBCSN, SuperSport, Canal+ and Fox Sports.

Youngsters get another chance – Predicted Liverpool lineup vs. Exeter