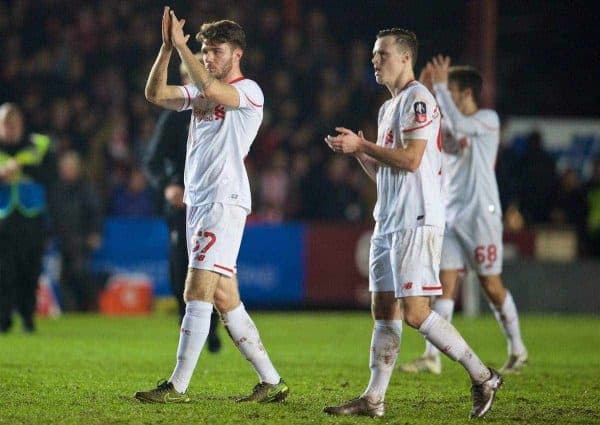 Liverpool were held / held Exeter City to a 2-2 draw in the FA Cup third round with a very makeshift side showing plenty of positives.

Goals from Jerome Sinclair and Brad Smith twice equalised for the visiting Reds, with Jurgen Klopp handing Ryan Kent, Kevin Stewart and Tiago Ilori their debuts for the club, as well as Sheyi Ojo later from the bench.

Here’s our five talking points from the match.

Much of the pre-match build-up focused on Liverpool’s young team, and questions were posed as to whether they were up to the job.

It soon became apparent that the youth players who’d been given a chance to shine were stepping up to the plate, but you couldn’t say the same for the senior players in the line-up.

Christian Benteke’s main contribution in the first half was to cause trouble in the penalty area in the build-up to Jerome Sinclair’s goal.

The £32 million Belgian was sat on the turf appealing for a penalty as an off-balance Sinclair remained ice-cool in front of goal to slot past Exeter ‘keeper Bobby Olejnik.

Benteke forced Olejnik into a good save with a close range header in the second half, but critics will say he should be scoring every time from that range, especially given the quality of Cameron Brannagan’s cross.

At the other end, first team goalkeeper Adam Bogdan was struggling with high balls into the box. This came to a head when he conceded a goal straight from a corner, flapping his hand over the crossbar but missing the ball completely as it swerved into the net.

The performance of this relatively experienced pair were overshadowed by excellent displays from the likes of Brad Smith, Brannagan, Sheyi Ojo, Jerome Sinclair, and Ryan Kent.

In the end the kids were alright, and performed admirably to take the game to a replay at Anfield.

Liverpool fans finally got to see Tiago Ilori make his first team debut, two and a half years after his £7 million transfer from Sporting.

The London-born Portuguese youth international has had loan spells at Espanyol and Bordeaux where he showed glimpses of the player he could be.

He also spent the first half of this season on loan at Aston Villa, as the club hoped to get him some Premier League experience before deciding whether he had a future at Anfield.

However, he didn’t make a single appearance for Villa and was recalled by Klopp without hesitation once the injuries hit and the transfer window opened.

It’s difficult to judge him on this one game against Exeter playing alongside Jose Enrique in the centre of defence, but there were some promising signs in an understandably rusty display.

Ilori tired towards the end of the game and was struggling to run by the time he was substituted.

Injury has interrupted his career on numerous occasions so far, but if he can recover quickly following his run out tonight he might see more first team chances in the coming weeks.

Ryan Kent continues to impress on every level

From Liverpool’s junior and youth teams, to League One, and now in his first team debut in the FA Cup; Ryan Kent has raised eyebrows at every level he’s played at.

It was no surprise that Liverpool’s first goal came during a period of the game when Kent started to see more of the ball.

The attacking midfielder has just returned from a spell on loan at Coventry City, and the experience of league football appears to have served him well.

While some of the players may have been daunted by the atmosphere and playing conditions at Exeter’s St James’ Park stadium, Kent has 17 games in League One under his belt, and will have been used to playing in this type of environment.

He was withdrawn just before the hour mark but he performed well in his role on the right, and with Jordon Ibe out injured, the 19-year-old could see more chances in this area of the pitch in weeks to come.

Aside from the occasional appearance on Instagram, Liverpool fans haven’t seen much of Jose Enrique during the past two seasons.

He’s been completely out of the picture, and hasn’t even appeared on the bench since January 2015.

Tonight he started at left centre back and looked every bit like a left-back who hasn’t played for a year operating in an unfamiliar position.

He did a job for the side tonight, but while it might be as unfair to judge Enrique on this game as it is to judge his centre-back partner Ilori, he gave no indication that he would be used by the club beyond the end of this season when his contract expires.

Nevertheless, Liverpool fans will be dreaming of a centre-back partnership of Enrique and Kolo Toure in the replay at Anfield…

Going forward, Liverpool need reinforcements at the back

When Klopp joined the club he faced the inevitable questions about new signings.

Would the new manager already have players in mind to bring in at the first opportunity, or would he work on the training pitch to improve current players?

Until recently there had been no suggestion that Liverpool would sign players in the January transfer window, and there was even talk that recent acquisition Marko Grujic would remain on loan at Red Star Belgrade until the summer.

Then the hamstrings broke.

The squad are now in the midst of an injury crisis, and the team selected tonight was one which Klopp felt he had to pick given the club’s punishing schedule and lengthy injury list.

It now appears to be a case of who and when, rather than if, when it comes to the activity in the January window.

Klopp has recently commented that dipping into the transfer market is “something we have to think about”, and the fact that his side finished the game with three left backs in the back four gives a big hint about the type of players he’ll need.