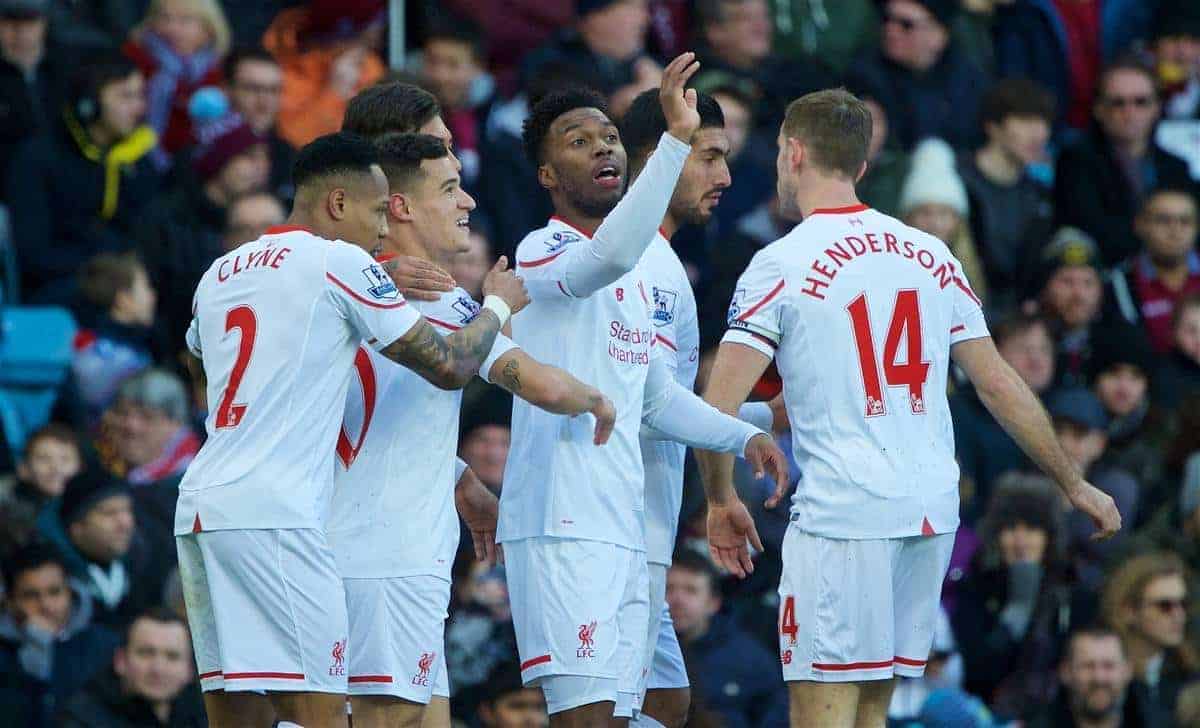 Liverpool turned on the style as they got back to winning ways on Sunday afternoon, thrashing Aston Villa 6-0 at Villa Park. After midweek disappointment away to West Ham United in the FA Cup, Jurgen Klopp‘s Liverpool turned their attentions to Villa Park, with a clash against a relegation-threatened Villa side.

With Daniel Sturridge making his successful return from injury with 70 minutes of action at the Boleyn Ground, Klopp handed the England striker his first start of 2016, in a 4-2-3-1 formation.

The German made nine changes to the side that lost 2-1 to the Hammers, with Jordan Henderson, and Roberto Firmino among those coming in.

Remi Garde’s Villans had enjoyed a slight upturn in fortunes in recent weeks, setting up a tough test for the Reds, and a fluent Liverpool pass it comfortably, putting six past Villa goalkeeper Mark Bunn.

A congested start saw Liverpool’s heavily attacking setup look to push a shaky Villa back towards Bunn’s goal, exploiting the flanks, with the right-sided tandem of Nathaniel Clyne and James Milner enjoying a large measure of possession.

After a sloppy start from the Reds, Sturridge made the decisive contribution, expertly nodding home a Philippe Coutinho cross to put Liverpool 1-0 up.

That goal sparked the travelling Kop into life, and despite some dangerous breaks from the home side, Liverpool imposed themselves, and it didn’t take long for Klopp’s side to find their second.

With Milner lining up over a free-kick on the left flank, the vice-captain’s delivery dipped over a packed penalty area and into the bottom corner.

Starting slowly, Liverpool’s strong attacking trio of Sturridge, Coutinho and Firmino sparked into life, and some great work between the lines played Henderson in on the edge of the six-yard box, but the captain’s flick was deflected wide.

Villa enjoyed some positive moments on the break, but a solid Liverpool defence, marshalled by a committed Kolo Toure, held firm.

Liverpool almost had a third before half-time, with Bunn making a great stop to deny Sturridge in the area, and that proved to be the last good chance of the half, with a cacophony of boos ringing out from the home stands on Neil Swarbrick’s whistle.

Villa started the second half with a strong attack down the right flank, with a flailing Simon Mignolet gathering Leandro Bacuna’s attempt at the second time of asking.

From there, Liverpool picked up where they left off, roared on by the away support, with an inspired Coutinho dictating play drifting inside from the left flank.

The Brazilian’s sumptuous through ball played in Moreno on the overlap 10 minutes into the second half, but Sturridge failed to latch onto the resulting cross.

It was a rampaging Emre Can that sparked Liverpool’s third of the afternoon, however, with the German driving down the left channel, before driving the ball beyond Bunn after some great buildup play from Firmino.

Seconds after replacing Sturridge, Divock Origi made it four for the Reds, sidefooting home after a great through ball from Coutinho.

Liverpool put their fifth past Bunn as the home fans flooded out of Villa Park, with Clyne stabbing into the back of the net after a goal-line scramble.

Klopp’ side continued to drive forward as the second half went on, and after a surging run from Clyne won a corner on the right-hand side, Toure was on hand to nod home to make it 6-0.

With the game dying out in the closing stages, Scott Sinclair, who had replaced Gabby Agbonlahor early in the second half, drew sarcastic applause from a thinning Villa Park as his long-range effort struck the bar.

This proved to be the best opportunity of the half for the Villans, and Garde will be frustrated as Liverpool ran out comfortable 6-0 winners.