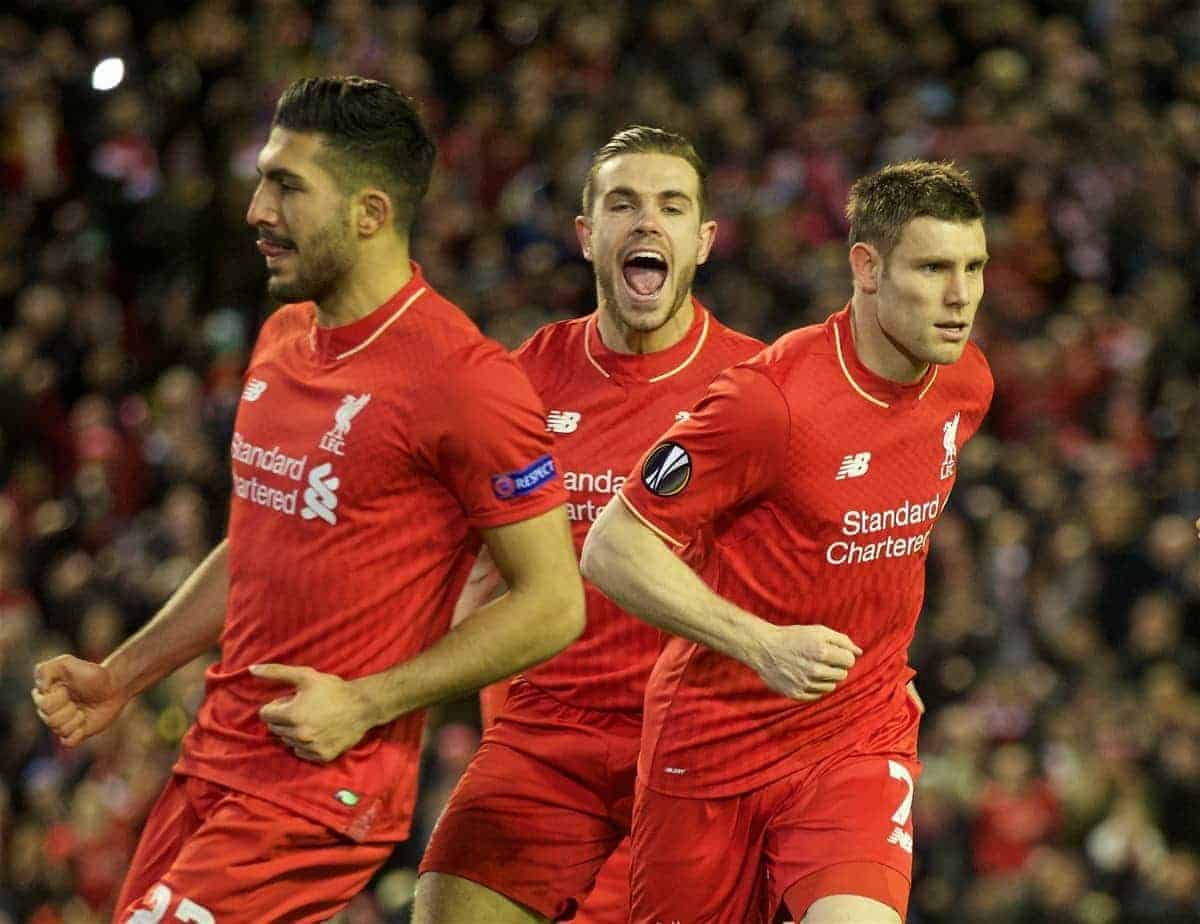 Sealing their place in the last-16 of the Europa League with a dominant display, it was a case of a “job done” from Jurgen Klopp’s Liverpool – but finishing must improve in Sunday’s League Cup final.

When asked post-match if frustrated over Liverpool’s lack of goals to complement their dominance against Augsburg, Klopp joked: “No, we are keeping them for the final!”

The Liverpool boss will certainly hope that is the case, with goals the only component missing from a dominant Reds display that saw off the battling German’s just three days before the Wembley trip.

It was a professional performance that keeps the all-important European campaign alive, and positions the Reds strongly for Sunday’s fight for a record ninth League Cup title – providing Klopp’s side convert their chances. After a disappointing display at the WWK Arena a week ago, a vastly improved performance in all aspects was required from Klopp’s team on Merseyside.

They didn’t disappoint; out of the traps instantly, zipping the ball around, creating chances and showing some of the full throttle football associated with Klopp’s exciting Borussia Dortmund sides in periods.

Visibly settled after the quickly taking the lead, the Reds dominated proceedings, controlling possession and playing with purpose, giving Markus Weinzerl’s depleted team little reason to believe they could become heroes in the absence of the eight missing first teamers they were without.

The Reds dictated with Emre Can and Jordan Henderson marshalling midfield in support of the lively Philippe Coutinho and Daniel Sturridge, who linked up beautifully in attack during their time on the pitch together, creating numerous chances to kill the tie in an excellent first 45 minutes.

Further opportunities presented for that to materialise after the break – with Sturridge missing a rare guilt edged chance to make it 2-0 before Klopp withdrew the striker – to his frustration – as the Reds boss rightly stuck to the League Cup preparations plan with his side in control.

Henderson should have sealed the match in front of the Kop – before Coutinho was also afforded an early night – but an outstanding shot-stopping display from Augsburg ‘keeper Marwin Hitz ensured of a nervy ending, that Liverpool ultimately saw out to secure their place in the next round.

Exiting at the round-of-32 stage in the last two Europa League campaigns, there was naturally an element of worry over a possible repeat despite Liverpool’s 16-game unbeaten record against German opposition at Anfield.

An energetic and bright attacking display from the Reds – who looked fit and fresh after a rare and welcome week without a game – ensured Klopp’s men became the first to reach the last-16 of the competition since Kenny Dalglish’s in 2011.

Though the Reds made harder work than needed to see off the Bundesliga strugglers, Klopp can be pleased with his side’s control on the night, even if finishing and ruthlessness will certainly need to improve as Liverpool move into the latter stages.

Klopp commented prior to the first leg that Europa League was his side’s best route into the Champions League, and the dream is still very much alive after deservedly overcoming Weinzerl’s brave outfit.

Victory helps build positivity throughout the squad ahead of the business end of the season, which could see a largely miserable year still yet become a memorable one with two competitions still offering the Reds success, starting on Sunday.

A season-defining double header faced Liverpool at the start of the week – the Reds have opened that in the best possible fashion with part one completed at Anfield.

Though a 1-0 victory via a penalty in 180 minutes against Augsburg will hardly strike mass fear into Man City, the fact Liverpool could, and should, have been 4-0 up at half time hands Manuel Pelligrini’s side a warning of what could be to come.

The Reds can ill afford to be as wasteful in front of goal on Sunday as they were at Anfield, scoring with just one of 24 shots on goal.

Converting numerous chances in the same ruthless manner showed in the 4-1 Etihad Stadium demolition of in November will be key to Liverpool securing silverware for the first time since 2012.

The next step is to turn the positive start into the perfect end on Sunday at Anfield South – the narrow Europa win will have provided confidence for Klopp’s side ahead of the showcase final with a City side also buoyed by positive European exploits.

A tough match awaits at Wembley, but if the Reds can turn Augsburg domination into goals against City, a memorable afternoon could await.