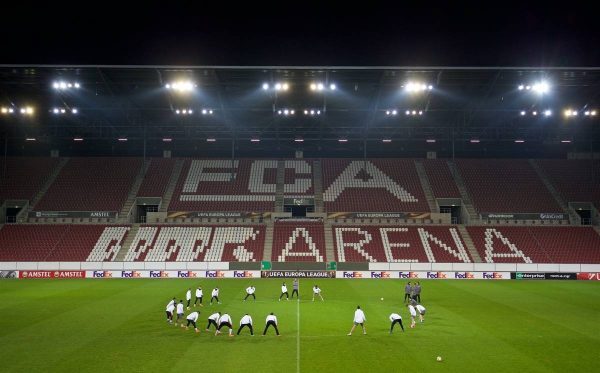 Augsburg welcome the Reds to the WWK Arena on Thursday, for the first of two clashes between the sides in the Europa League‘s round of 32.

Drawn against Klopp’s side in the middle of December, Weinzierl would have fancied his chances of victory at the time, with Liverpool struggling with a number of major injuries throughout the winter.

But with the likes of Daniel Sturridge and Jordan Henderson restored to Klopp’s squad, and Roberto Firmino and Philippe Coutinho hitting top form, the 41-year-old is less confident.

“I would have preferred to play against Liverpool six weeks ago,” he told reporters on Wednesday afternoon.

“They are getting better each week and injured players are coming back. With these players Liverpool is a much better team with high quality.

“We are expecting a very good opponent, who has the ambition to win this competition. So the roles are clear.”

Despite being the home side, Augsburg find themselves heading into this two-legged tie as the underdogs, but Klopp is anticipating a tough challenge.

The 48-year-old identified physical striker Raul Bobadilla as a key player for the Bundesliga side, saying Augsburg “will fight for everything.”

Weinzierl reiterated this, stressing that Augsburg will be pushing for a positive result before a trip to Merseyside next week.

“Our goal is to play well and fight for a good position before the second leg,” he continued.

“After that Liverpool will know where Augsburg is and how Augsburg plays.”

Augsburg will be without influential defensive midfielder Daniel Baier for this clash, while centre-back Jeong-Ho Hong, Czech midfielder Jan Moravek and the experienced Piotr Trochowski are also unavailable.

But with Bobadilla having scored six goals in five Europa League appearances so far this season—the same number as Klopp’s squad combined—and the likes of Caiuby and Alexander Esswein primed for roles in Weinzierl’s attack, Liverpool would be wise to respect their opposition.

Ausgburg have referred to this clash as the “biggest” in their history.

Despite a muted run of form in the Bundesliga this season, finding them in 14 place after 21 games, they will be highly motivated on Thursday night.