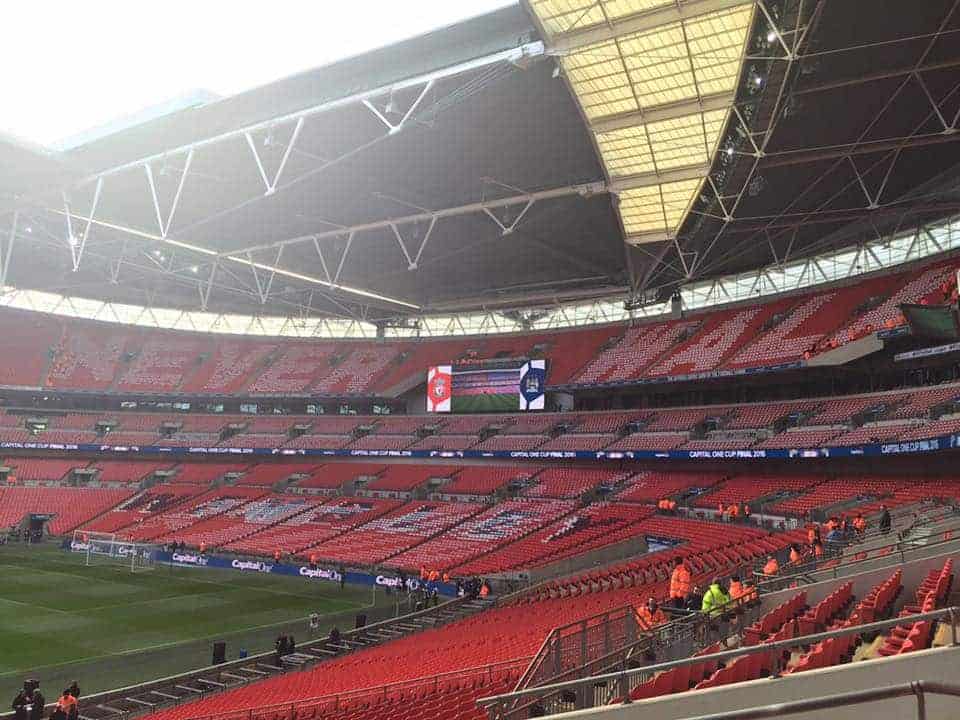 Liverpool face their biggest match of the season on Sunday, as they take on Man City in the League Cup Final at Wembley Stadium. The Reds warmed up for this weekend’s huge game with a slightly nervy 1-0 win over FC Augsburg on Thursday evening.

It means Jurgen Klopp‘s side are through to the last 16 of the Europa League, which was imperative given their struggles in the Premier League.

Sunday’s showdown really is impossible to predict, with both Liverpool and City capable of brilliance and incompetence in equal measure.

The first goal is likely to be crucial, and it could simply be a case of which star players turn up and which ones go missing.

Klopp may well field the same starting lineup that featured against Augsburg, with Lucas Leiva performing admirably in a centre-back role. Kolo Toure replacing him is surely the only potential alteration.

Clinching a first trophy in four years would be enormous for everyone associated with Liverpool Football Club, and it promises to be a tense afternoon at Wembley.

The win over Augsburg saw the Reds keep their third consecutive clean sheet, and their only defeat in their last five matches was when Klopp took an under-strength team to West Ham United in the FA Cup.

Performances remain a little unconvincing on the whole – Liverpool struggle to convince for an entire 90 minutes – but some of the football on Thursday night was sublime at times.

Slowly but surely, Klopp is beginning to stamp his mark on this team, and it could be that the Merseysiders peak in the last few months of the campaign.

City, meanwhile, have been equally erratic.

Their 3-1 Champions League win at Dynamo Kiev on Wednesday was probably their finest display of the season, with ex-Liverpool man Raheem Sterling in particularly sparkling form.

Prior to that, however, an inexperienced side lost 5-1 in the FA Cup at Chelsea, while title rivals Leicester City and Tottenham Hotspur both won at the Etihad.

While they able to produce brilliance, with Manuel Pellegrini leaving in the summer and a number of players ageing, there does seem to be an overall lethargy throughout the squad.

Let’s hope the bad version of City turn up on Sunday.

Following a 1-1 draw in which Danny Ings scored, penalties were required to separate the two sides. Adam Bogdan made himself the unlikely hero, saving three Carlisle spot-kicks.

A 1-0 win at home to Bournemouth followed, with Nathaniel Clyne scoring the only goal of the game, before a sensational 6-1 win at Southampton in the quarter-finals.

Divock Origi scored a hat-trick at St Mary’s, the returning Sturridge scored two typically sublime goals and Jordon Ibe also found the back of the net.

Klopp’s men beat Stoke City on penalties in the semi-finals, following a 1-1 draw on aggregate over the two legs, with Joe Allen stroking home the winning effort. Their path to the final was complete.

City started their League Cup journey with a resounding 4-1 win away to Sunderland, with Sterling, Sergio Aguero and Kevin De Bruyne among the scorers.

They then demolished Crystal Palace 5-1 at the Etihad, with youngster Manu Garcia scoring his side’s fifth goal, before a De Bruyne-inspired 4-1 win at home to Hull City saw them cruise into the semis.

Everton stood between City and a place at Wembley, and the Toffees’ 2-1 win in the first leg at Goodison Park arguably made Pellegrini’s side underdogs to reach the final.

When Ross Barkley put Everton 1-0 up in the second leg, their chances looked even more slim, but goals from Fernandinho, Aguero and De Bruyne turned the game on its head. Liverpool have enjoyed more success in the League Cup than any other side, winning the competition eight times since its inception in 1960.

Their first four triumphs incredibly came in succession, between 1980 and 1984, and it was 11 years before two Steve McManaman goals against Bolton Wanderers inspired the Reds to a fifth victory.

In the 21st century, Liverpool have lifted the trophy three times.

The first came in 2001, with a shootout win over Birmingham City sealing the first of three cup wins in 2000/01, before Gerard Houllier’s side defeated Man United 2-0 in the final two years later. Kenny Dalglish then won the competition in 2012, with Cardiff City one of many sides Liverpool have conquered on penalties in finals down the years. It remains the club’s last piece of silverware.

City have won the League Cup on three occasions, with their maiden triumph coming in a 2-1 win over West Bromwich Albion in 1970.

The Citizens then defeated Newcastle United by the same scoreline six years later.

It was 38 long years before the blue half of Manchester could celebrate winning the League Cup again.

A stunning Yaya Toure goal, and further efforts from Samir Nasri and Jesus Navas, earned them a 3-1 win over Sunderland, in a game that saw former Liverpool man Fabio Borini give the Black Cats the lead.

The bookies clearly see the Wembley matchup as very tough to call, which tends to highlight both sides’ aforementioned unpredictability.

City are the narrow favourites to prevail at 8/13, while Liverpool are 5/4 to return to Merseyside with another trophy added to their collection.

Aguero, the man the Reds really have to fear, is 15/4 favourite to be the first goalscorer on the day, while Daniel Sturridge is 11/2.

Sterling is 10/1 to be Man of the Match against his former club, and his replacement at Liverpool, Roberto Firmino, is the same. Klopp will be relieved to have seen his players come through the Augsburg game unscathed, although Jordan Henderson and Philippe Coutinho struggled with knocks throughout the night.

Martin Skrtel, Dejan Lovren and Adam Lallana are all back in training too, with long-term injury victims Ings and Joe Gomez the only real absentees of note.

Having Sturridge fit again makes such an enormous difference to Liverpool, and you can’t help but wonder where they would be in the league if he had been available all season.

De Bruyne, who was one of 2015/16’s outstanding performers before picking up a serious knee injury, is a big loss, while Nasri remains on the sidelines having missed the majority of the season.

Navas, Eliaquim Mangala and Wilfried Bony are available, but Fabian Delph is out.

Klopp spoke about his desire to win a trophy as Liverpool manager:

“In this job we only want to win; titles, cups.

“A lot of players and managers have to work their whole life, and be very successful, but not get the chance [to win a trophy].

“What will happen, we have to wait. It’s a pretty strong opponent. What it feels like today is it’s Liverpool against Manchester—as it always is!

“If I think about it, I have a few nice pictures in my mind of after the game, being in Wembley with our fans, having a real reason to celebrate together.”

“[Jurgen] Klopp has the experience of playing finals, both domestically and in Europe. He knows what it is to be there.

“We cannot get flustered by the occasion on Sunday. We have to ensure we perform well on the day.

“This is my third time playing at Wembley. As a player you want to be remembered for trophies and winners medals.”

Pellegrini talked up the match as well:

“For everyone, Wembley is one of the most important stadiums in the world. To play a final there creates a different atmosphere.

“It’s a special thing. That’s why I respect every cup so much.”

The match is being shown exclusively on Sky Sports 1 in the UK, with coverage starting at 4pm, following Arsenal‘s trip to Man United in the league.