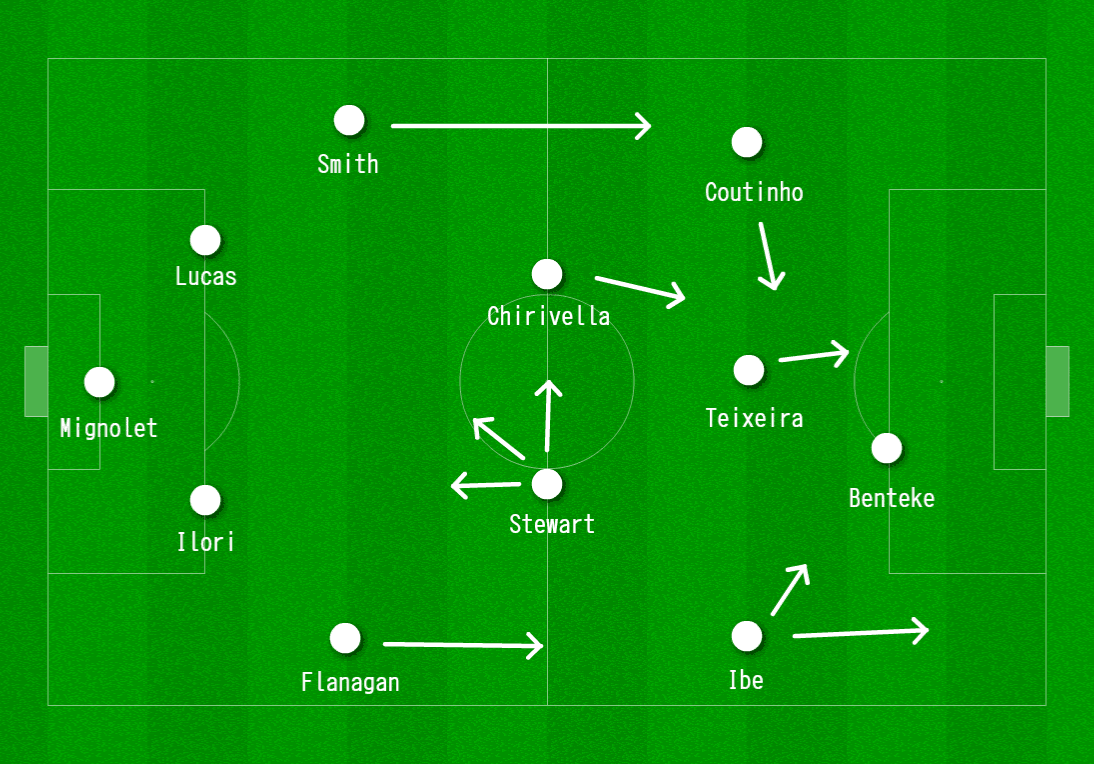 Falling to a disappointing 2-1 defeat in Tuesday night’s FA Cup replay against West Ham United, Liverpool failed to capitalise on a strong performance.

Fielding another young Reds selection in the FA Cup, Jurgen Klopp will have been pleased with the way his side dominated West Ham in the attacking third, but familiar frustrations crept in as Liverpool failed to finish on top.

Making 10 changes to the side that drew 2-2 with Sunderland on Saturday afternoon, Klopp set his side up in a 4-2-3-1 formation from kickoff.

This saw Kevin Stewart and Pedro Chirivella, making his full debut, deployed as a two-man midfield unit, while Jordon Ibe (right), Joao Carlos Teixeira (No. 10) and a returning Philippe Coutinho (left) stationed themselves in support of Christian Benteke.

Though Slaven Bilic’s side were close to full strength, Liverpool swarmed into the attacking sector from the first whistle.

With Chirivella dictating play with confidence and maturity, pushing forward into the hole behind the attack, Teixeira was able to move into position almost as a second striker.

This saw the Portuguese enjoy plenty of the ball on the edge of the penalty area, combining well with Coutinho, who spent the majority of his 59 minutes on the field drifting inside.

As is often the case, Ibe was tasked with driving towards the by-line as an orthodox winger, while a rampaging Brad Smith performed similar duties on the opposite flank, bombing forward from left-back.

With Coutinho tiring, after cancelling out Michail Antonio’s opener with a well-worked free-kick, Klopp prompted a tactical switch on the hour mark. Off came Coutinho and Teixeira, with Divock Origi and Daniel Sturridge taking their place, with the duo making their long-awaited returns from injury.

With three natural strikers on the field, Klopp was clearly pushing for a winner before extra time.

But while the structure remained similar to that of the first 60 minutes, Klopp focussed on the exceptional talent of Sturridge, looking to utilise the No. 15’s pace, along with that of Origi and Ibe.

Sturridge took up the central role in what became a 4-2-4 formation in attack, with Origi on the left and Ibe on the right.

This allowed Sturridge to link up with Benteke, who held the ball up well but continually failed to test the impressive Darren Randolph.

After over two months on the sidelines with various injuries, Sturridge proved a major positive for the Reds despite defeat, playing with his head up, driving at the West Ham defence and coming close on a number of opportunities.

Just as Coutinho and Teixeira did in the first half, Sturridge made Liverpool click.

Klopp will be rightly disappointed with West Ham‘s last-minute winner, but may be quietly relieved that his side will have a weekend off before the League Cup final.

Having shown their quality on returning to contention on Tuesday night, Coutinho and Sturridge are poised to add a welcome fluency to Liverpool’s attacking line—and, particularly in the latter, will help Klopp inject some cutting edge into his selection.