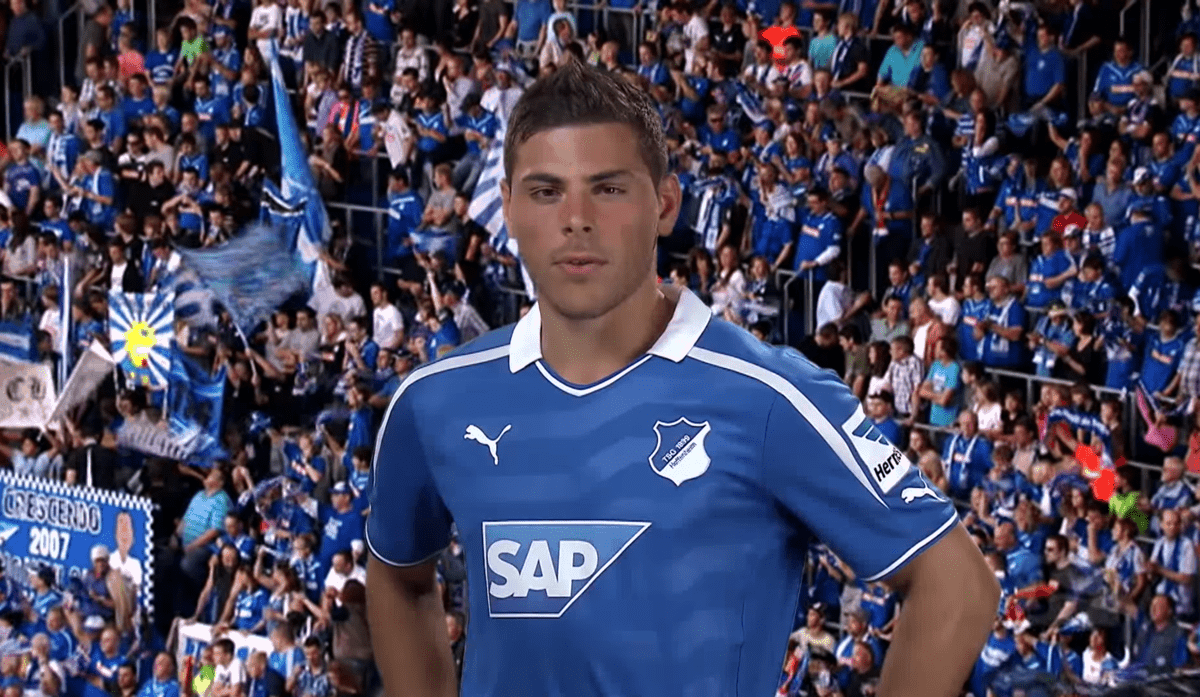 With Jurgen Klopp on the lookout for reinforcements on the wing this summer, Hoffenheim’s talented forward Kevin Volland should be on his radar.

“We have enough strikers—five with Roberto [Firmino]—but not too many wingers, just a few young ones with great potential,” Klopp said earlier this month, revealing his next avenue in the transfer market.

The former Borussia Dortmund manager enjoyed considerable success in the Bundesliga owing to his fast-paced, width-based attacking system—and this is something that has been lacking so far at Liverpool.

With Jordon Ibe serving as the only orthodox winger in Klopp’s first team, the German would be wise to strengthen his flanks this summer.

One player that may have emerged on Klopp’s radar already is Hoffenheim’s Volland, and the 23-year-old would make the ideal target for the Reds ahead of 2016/17.

At Dortmund, Klopp’s attacking setup saw the likes of Jakub Blaszczykowski, Marco Reus, Pierre-Emerick Aubameyang and Henrikh Mkhitaryan deployed in the wide roles, with this quartet all possessing similar attributes.

Namely, they are all incredibly quick, able to drive through defences with powerful runs and are equally confident cutting inside towards the penalty area or pushing for the byline.

This variety helped Dortmund to a Bundesliga-high goal tally of 80 in 2011/12, on their way to a second title under Klopp.

Moving to Liverpool in October, Klopp will have been disappointed at the paucity of wide options at his disposal.

The decision to loan Lazar Markovic to Fenerbahce, and the failure to adequately replace Raheem Sterling, has left Klopp with a clutch of high-quality attacking midfielders but only one recognised winger.

Philippe Coutinho has been regularly deployed on the left flank, while both Adam Lallana and James Milner have spent much of their time under Klopp to date rotating on the right-hand side.

Coutinho’s overriding quality has seen the Brazilian shine, but largely when drifting towards his natural No. 10 role.

Furthermore, while the industry of Lallana and Milner have provided a welcome balance alongside the likes of Coutinho, Firmino and Daniel Sturridge, they are far from the ideal option.

Klopp’s admission, months ahead of the summer transfer window, suggests that he is fully aware of this, and with Hoffenheim finding themselves in the balance at the business end of the Bundesliga season, the 48-year-old would be wise to take advantage and pursue Volland.

Having seen Firmino depart for Merseyside in a deal worth up to £29 million last summer, Hoffenheim were shorn of their best player, and their attacking talisman.

Despite the signing of Eduardo Vargas from Napoli, Die Kraichgauer have struggled for quality in their forward line throughout 2015/16 so far, and currently find themselves languishing in the Bundesliga’s relegation zone.

Having averaged just a goal a game, Hoffenheim have taken 18 points from a possible 66, and look set to drop out of the German top flight, in what would be a remarkable fall from grace.

It would be difficult to blame Volland, however, with the Germany international maintaining a consistent level of form throughout the season so far.

Taking up the role of Hoffenheim’s first-choice centre-forward following the departures of Firmino and Anthony Modeste, Volland has showcased his quality in a relatively unfamiliar position.

A left-footed forward most comfortable on the right flank, Volland is a strong, stocky young talent blessed with pace and dribbling ability, and—much like Klopp’s former charges—is comfortable varying his game in attack.

Furthermore, unlike the goal-shy Lallana, for example, Volland has an eye for the spectacular, and his penchant for stunning long-range efforts could provide Liverpool with an X factor in attack.

Utilised as an auxiliary striker in the Germany U21s’ European Championship campaign last summer, Volland showed his ability to perform as an off-the-shoulder forward, with his dynamic, lateral movement helping him to score twice in an impressive 3-0 win over Denmark.

Aside from his attacking prowess, a hugely underrated quality of Volland’s is his defensive work.

The Marktoberdorf-born star has demonstrated a high work ethic and pressing ability throughout his time at Hoffenheim, and has averaged 1.6 successful tackles per 90 league minutes this season, more than Coutinho (1.5), Ibe (0.6) and Sturridge (0.5).

He is far from the finished product, with just five goals and four assists in 21 Bundesliga appearances this season, but has shown enough quality to suggest he could thrive at Liverpool.

Finding a place for Volland in Klopp’s current Liverpool setup is simple, as while Coutinho, Firmino and Sturridge have established themselves as first-choice options in the German’s 4-2-3-1, there remains a void on the right flank.

While Volland has shown his ability to operate as a centre-forward for both Hoffenheim and the Germany U21s, his quality cutting in from the wing would see him shine on Merseyside.

Crucially, this would reunite the 23-year-old with Firmino, with the pair enjoying a fruitful partnership during their time together at the Rhein-Neckar Arena.

In 2014/15, Volland and Firmino scored 15 goals and registered 17 assists between them in the league, with their attacking interplay propelling Hoffenheim to a eighth-placed finish.

The prospect of a right-sided Volland and a central Firmino combining in Klopp’s 4-2-3-1 would no doubt entice the Liverpool manager, with the addition of Volland’s industry and direct attacking play providing the Reds with an edge.

With Hoffenheim looking set to drop out of the Bundesliga this season, Volland could seek a move elsewhere, and if this is the case, Liverpool would be wise to target him this summer.