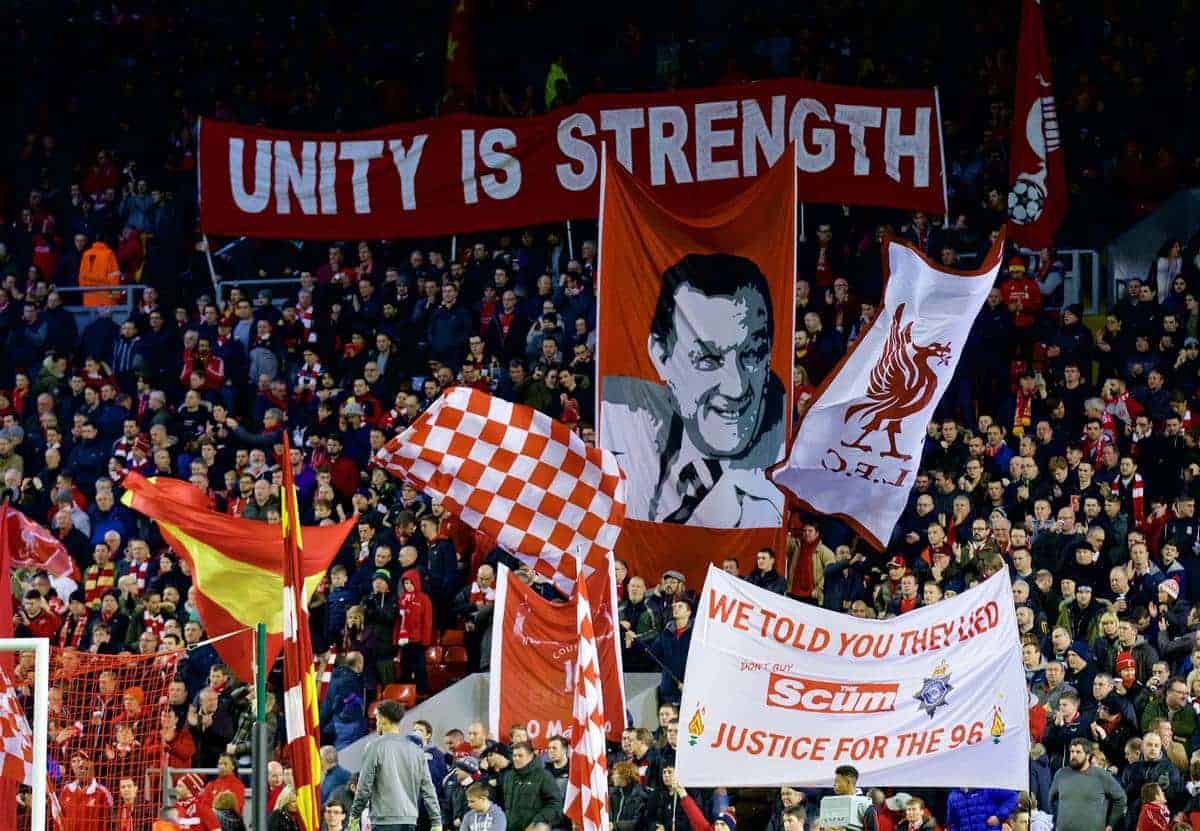 James Nalton was at Anfield on a memorable evening, as Liverpool and Manchester United faced off in Europe for the first time.

Jurgen Klopp‘s men came away with a much-deserved victory, which was only kept down to a scoreline of 2-0 thanks to the opposition goalkeeper, David De Gea.

The players shone, as did the crowd, and here are just five talking points from a game which will be discussed for years to come.

The Anfield atmosphere lived up to the occasion

Anfield hasn’t been this loud prior to kick-off for a long time. From the moment the players stepped out onto the pitch to warm up, until the first ball was kicked, the noise from the stadium grew to a deafening crescendo.

The players, led by Jordan Henderson, were welcomed onto the Anfield turf for their pre-match training drills with loud cheers, even though there were only a handful of fans in each stand at this time.

The songs had started already, and a vast array of flags and banners were on display around the ground. These increased as kick-off approached.

The rendition of You’ll Never Walk Alone was spine tingling and sustained. It was also made louder by the fact that the Manchester United fans were trying to drown it out, and as a result it also went on for what must have been around twenty repetitions of the chorus.

The intensity in the ground only increased after Daniel Sturridge opened the scoring from the penalty spot, and Old Trafford will have to reach serious decibel levels if they’re to better this in the second leg.

Judging by the noise from Liverpool the fans as they departed the stadium, they’ll still be singing tomorrow morning.

Adam Lallana has found form (and a yard of pace!)

It would be easy to talk about the brilliant Roberto Firmino, again, but a player who has had an up-and-down start to his Liverpool career – Adam Lallana – matched the Brazilian tonight.

The flicks and tricks were performed with purpose – not just for show – and the English midfielder also appears to have found an extra yard of pace which had been much lacking in his game.

There was no better example of this than his assist for Firmino which gave Liverpool their second goal.

He beat the Manchester United defenders to the ball with a sharpness of mind, and quickness of foot.

If he can keep this up as the season draws to a close, then look to improve further under Klopp going into the next campaign, then he could be a very important player in the Liverpool squad.

In recent times Liverpool have lacked true leaders and players with bite down the spine of the team. Or to put it another way they’ve lacked battlers.

Jordan Henderson has grown into his role as captain, even though he was perhaps given the armband too soon, but is a tireless worker as opposed to a fighter.

Not since Javier Mascherano have Liverpool had a terrier in the backbone of the team, and though they have Jordan Rossiter in the youth set-up who could eventually play this role, the side need one right away.

The win against Crystal Palace wasn’t very Liverpool-esque, as they ground out three points in a match they probably shouldn’t have won, and one in which they were down to ten men for a good portion of the game.

Can started in midfield, dropped to centre-back, then returned to the middle of the park for the final few minutes. It was a commanding and classy performance, and the type which you’d expect to see from a captain.

Tonight saw more of the same from Can, but behind him he had support from Mamadou Sakho. The Frenchman doesn’t always look like the tidiest defender, but there’s no doubting his commitment and, what really matters, his effectiveness.

Chants of “Sakho, Sakho” ring out from The Kop as the defender makes another vital intervention, and the mini-revival of Dejan Lovren alongside him is much welcome too.

If both Nathaniel Clyne and Alberto Moreno can reach the top of their games on a more regular basis, then Liverpool can’t ask for much more in the full-back positions.

At Anfield, where many teams sit back and defend in numbers, the width provided by the pair is vital, but they also have the dynamism to recover if the opposing team manage to spring a counter-attack.

Henderson and Can will cover for them to a certain extent, as the manager looks to have found a good balance of roles in his starting eleven.

Away from home the occasional cameo from Jon Flanagan could prove useful and effective, but there’s no doubting who the best full-backs at the club are – as long as they can find consistency.

They need to regularly reach 7-8/10 as opposed to the fives and sixes they occasionally turn out.

This level needs to be maintained at Old Trafford next week

Tonight, Liverpool beat a Louis van Gaal Manchester United team for the first time. In previous games the Dutchman was ahead by nine goals to two, and had won all four of the meetings in the Premier League.

This is something worth bearing in mind heading into the second leg at Old Trafford next week.

Though tonight’s performance was convincing, the players need to maintain this level when they travel to Manchester.

Another positive is that Liverpool have a full week on the training ground to prepare, whereas United face West Ham in the FA Cup on Sunday. Liverpool are holding all the cards, but still need to turn in a professional performance and try to defeat Van Gaal for a second time.