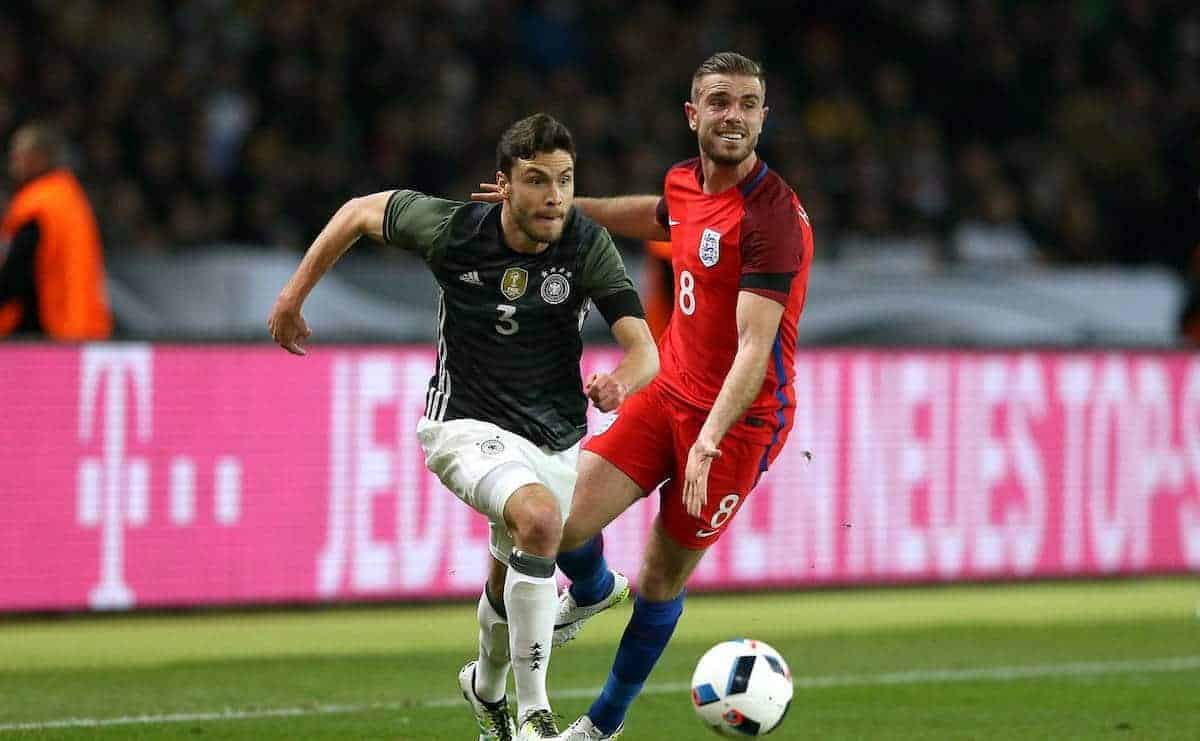 There have been numerous Liverpool players on international over the last three days, and we take a look at how they have fared for their respective countries. Since Wednesday evening, there has been a decent smattering of international football to feast your eyes on across the globe.

With both Euro 2016 and Copa America now very much on the horizon, there are many Liverpool players hoping for busy summers.

A large chunk of Jurgen Klopp‘s Reds squad have been off representing their nations this week, with a varying degree of success.

Here is a round-up of this week’s international action so far.

Joy for England, misery for Can

England hardly ever combine good football and a positive result, but they did exactly that against world champions Germany on Saturday evening.

The Three Lions overcome a two-goal deficit at Berlin’s Olympic Stadium, as they launched a superb second-half comeback to stun their star-studded opponents.

Nathaniel Clyne, Jordan Henderson and Adam Lallana all started proceedings, with the trio all playing a part in the victory.

James Milner and Daniel Sturridge didn’t feature from the substitutes’ bench, although they may get some playing time against Holland on Tuesday.

Emre Can once again had to endure a 3-2 defeat, and he did at Southampton last weekend, and he played at right-back all evening for Germany.

Although the 22-year-old did a solid enough job there, it was clear to see that he is far more at home in his preferred central midfield role.

Two reported Liverpool targets, Jonas Hector and Mario Gotze, both played for the hosts, with the latter only appearing late in the second-half. Liverpool’s defensive trio of Mamadou Sakho, Martin Skrtel and Dejan Lovren were all on duty for France, Slovakia and Croatia, respectively, but had varying degrees of success.

Sakho was not involved at all in his side’s late 3-2 win away to Holland, with Arsenal‘s Laurent Koscielny preferred at left-sided centre-back. He will do well to oust him from the starting line-up ahead of Euro 2016.

Skrtel helped Slovakia keep a clean-sheet in their goalless draw at home to Latvia on Friday, while Lovren played all 90 minutes in his country’s comfortable 2-0 win over Isreal.

Lovren didn’t feature in the 1-1 draw against Hungary, however, but goalkeeper Adam Bogdan did the second half of that match for the hosts.

Philippe Coutinho was deservedly recalled to the Brazil squad, having been unacceptably exiled for a while, and he appeared as a second-half substitute in the 2-2 draw against Uruguay.

The 23-year-old came up against former Liverpool striker Luis Suarez, with ‘El Pistolero’ among the scorers on the night.

Welsh duo Danny Ward and Joe Allen both also came on in the second-half, in their 1-1 draw at home to Northern Ireland on Thursday.

It was a particularly proud night for Ward, who earned his first international cap at senior level. Australia absolutely cruised to a resounding 7-0 win at home to Tajikistan on Thursday, in what was another successful outing for left-back Brad Smith.

The young left-back earned his fifth cap for the Socceroos, and he will no doubt be dreaming of appearing at the 2018 World Cup in Russia.

Things didn’t go as swimmingly for Jordon Ibe, though, with the 20-year-old sent-off in England U21s’ 1-1 draw in Switzerland, in their European Championship qualifier.

Ibe picked up two bookings, as a frustrating run of form continues for the speedy winger.

Neither Lazar Markovic or Marko Grujic featured at all for Serbia, as they succumbed to a 1-0 defeat away to Poland on Wednesday evening.