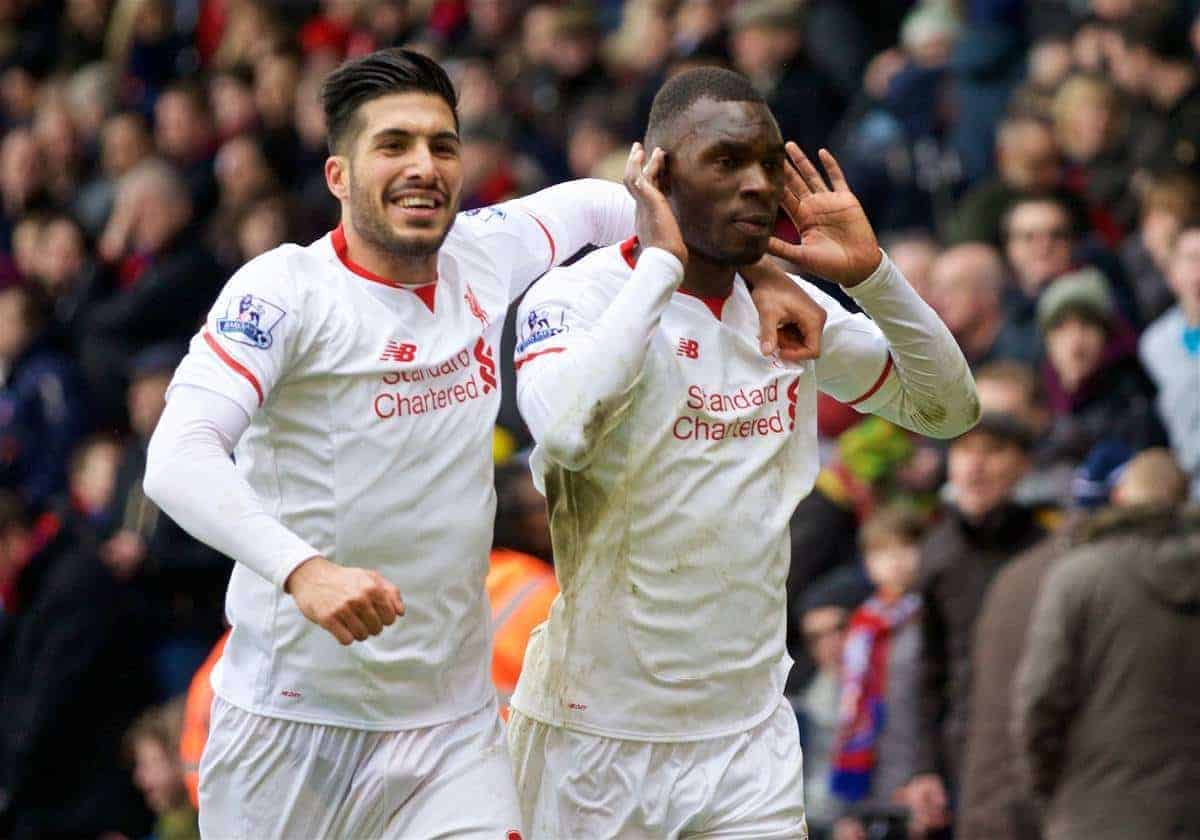 Following Liverpool’s dramatic late win over Crystal Palace on Sunday, we round up the best of the media reaction from a sweet Selhurst Park victory.

Jurgen Klopp’s 10-man Reds kept their dreams of a top-four finish alive with a dramatic comeback win over the Eagles.

Christian Benteke was the unlikely hero, coming off the bench to win and convert a 95th-minute penalty to keep the Reds in the hunt for fourth place, after Roberto Firmino’s cool finish cancelled out Joe Ledley’s opener for the hosts.

The dismissal of James Milner when the Reds were trailing looked to have ended hopes of claiming maximum points at a notoriously testing ground, but Klopp’s side showed the anger he called for to fight from behind with a man down to claim a huge victory.

There was no better time for the Reds to claim three successive league wins for the first time this season, and here is how the media reacted to the dramatic success.

It was a spirited fight-back by Jurgen Klopp’s team, who performed with a healthier tempo and created more chances with 10 men than they did with 11.

Yet the manner in which the visitors responded to losing Milner, penalised for fouls on Yohan Cabaye and Wilfried Zaha, was admirable. Klopp spoke of passion taking over. It eclipsed anything Palace could offer.

Here was the Jurgen Klopp effect in all its glory.

Klopp inherited a squad of players who had previous for wilting in the face of adversity.

Now they graft and fight to the finish. That never-say-die spirit Klopp has instilled came to the fore at Selhurst Park.

The Express’ Tony Banks praised the Reds’ “refusal to give in”:

But [Liverpool] have to be given credit for holding on after going a goal down to Joe Ledley’s drive, and then seeing James Milner sent off for two yellow cards. Yes, they were lucky, but Philippe Coutinho made a difference when Klopp threw him on, and they did refuse to give in.

There was praise forthcoming for Klopp, following his bold and ultimately game-changing tactical switches that provided the catalyst for a stunning comeback.

As well as being testament to Klopp’s man-management skills, this was also a tactical triumph for the German.

His decision to switch to 3-4-2 after Milner’s dismissal was crucial as Liverpool took control – despite their numerical disadvantage.

Instead, Klopp boldly brought on Coutinho for the full-back Jon Flanagan and instructed his team to attack. With such bold endeavour, the balance swung his way.

Milner was dismissed and, strangely, Liverpool improved. Suddenly, they had more urgency or, as Klopp claimed, “focus” in the 3-4-2 formation they adopted.

Though not a vintage team performance from the Reds, certain impressive individual displays caught the eye at Selhurst Park.

Crystal Palace may regret not testing Liverpool’s ‘keeper in the second half, particularly once they had the man advantage, but they found him in top form during the opening 45 minutes.

He was brave and strong when denying Bolasie early on, sharp when stopping from Adebayor at his near post soon after. All afternoon, he was loud and decisive when coming for high balls, and his distribution was sound.

In his player ratings for ESPN, Steven Kelly echoed:

[Mignolet] made good saves, particularly one brave block at the feet of Yannick Bolasie, and his catching was assured throughout. Had no chance with Joe Ledley’s goal but played a big part in keeping the visitors within sight of the comeback that eventually followed.

Benteke saw another effort saved before the penalty, and his first goal of 2016. It was his eighth since a transfer from Aston Villa and, although more was expected of a centre forward priced at £32.5million, his goals are usually significant.

Four times in the Premier League, he has scored the winner: against Bournemouth, Leicester and Sunderland and now Palace.

But he capped a dramatic fightback by 10-man Liverpool to end his 13-game goal drought and breathe new life not just into the Reds bid for European football but possibly his Anfield career too.

Yes it was only a spot-kick but it was a crucial, match-winning one that came at the end of a 10-minute cameo off the bench that was full of pace, power and intent from Benteke. Down a goal and a man, Liverpool were forced to attack and move the ball with urgency. They did so and produced their best spell of the game, but it was due in no small part to the introduction of Philippe Coutinho.

In the Brazilian pairing of him and Roberto Firmino, Klopp must feel he has two players around whom he can build a team.

Jones then focussed on the growing importance of Firmino:

Roberto Firmino has had better games than this. He’s been more impressive, more switched on, more classy.

But he’s developing a rather nice habit of making decisive contributions in a Liverpool shirt right now.

Interestingly, Gray questioned the future role of Jordan Henderson in Klopp’s squad after another subdued display:

[Klopp] must also be questioning whether Jordan Henderson is really the man to lead his team into this new era. On multiple occasions in the first half he demanded the ball back to him at the base of the midfield.

And on a day of overriding joy following a stunning comeback, Tony Evans, for ESPN, instead bemoaned Liverpool’s sluggish defence of their 18-yard box:

Mignolet transmits no confidence to his back line but that is only half the problem. Klopp has been unable to find a centre-back combination that plays with any authority. Lovren has never recaptured his Southampton form after his move to Anfield and Sakho looks skittish on the ball. Despite his obvious physical gifts, he has not quite learned how to use his body to his advantage.

The midfielders offer little help, either. Moreno should have done better with his attempted clearance before Ledley scored but there were chances to kill off the danger as the ball squirted around the box.