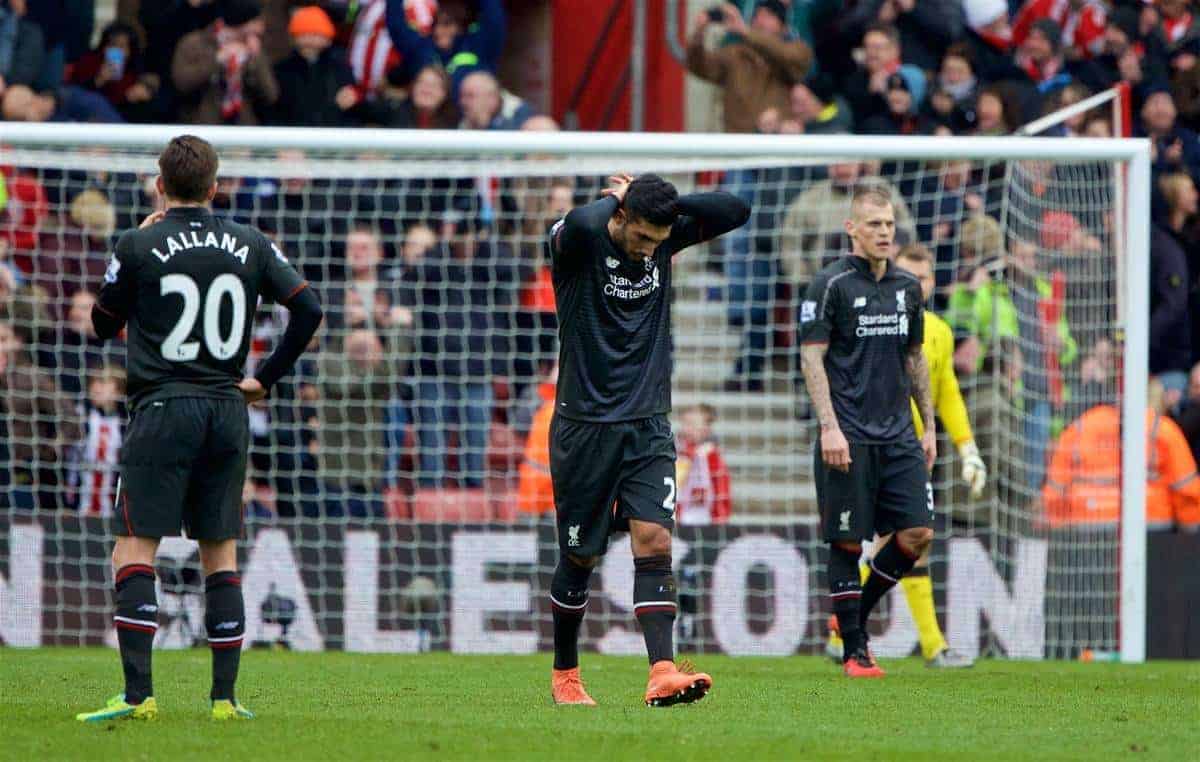 Liverpool blew a two-goal lead to lose 3-2 at Southampton on Sunday, and we bring you the best social media reaction from during and after the game.

A horrific afternoon down south was going so well for much of the afternoon, but it ended in horrible fashion for Jurgen Klopp and his side.

Philippe Coutinho and Daniel Sturridge both scored to see the Reds race into a 2-0 first-half lead, but it all went wrong when Martin Skrtel replaced Dejan Lovren at half-time.

It was an afternoon that surely saw the Reds’ top-four hopes extinguished, and was a defeat that really hurt. It started off so well, too.

Was totally disengaging from this match before the Flanno news. Now feels like the biggest since Athens.

Coutinho and Sturridge put the Reds in total control early on:

WHAT A GOAL AGAIN!

This football stuff is pretty enjoyable

norwegian wood on the forum:

Studge! Lovely finish, pulls the trigger extremely quickly there – as he does.

Really swift attack that. Out of trouble, down the line, good run by Origi. Very nice.

There is nothing faster than Sturridge's left peg

That's a stunning counter. Coutinho down the left to Origi who surges forward and unselfishly lays it off to Sturridge. Finish was emphatic

Oh man, that was just devastating counter attacking. What a goal that was. Stunning.

It was a magnificent opening 45 minutes from Klopp’s men, and they were deservedly lauded at the interval:

Half time. 2-0. Great performance so far. Look like a serious threat going forward and comfortable in defence. #LFC

That was a magnificent opening 45 minutes. More of the same please #LFC

RJK on the forum:

Good half. Open game. Thankfully the ref saw their penalty for what it was. On recent displays, I’d back Joe to keep his place. Played much better than what we’ve seen from Henderson of late.

theres always tomorrow on the forum:

Good first half for us. Could have been 5-0 but for a bit of luck. Can’t complain too much.

No Pyro No Party. pic.twitter.com/Tm7jG9eTlO

Then it all went horribly wrong, however, with the fans almost solely blaming Skrtel:

In Martin Skrtel's last 86 minutes on the pitch, the score is #LFC 0, Watford & Southampton 5
But I'm sure it's just a coincidence

What just happened? Skrtel clearly wasn't ready for that game.

And when Benteke came on Reds had no fluency. He has his uses, but I’d cash in over summer. And ship out Skrtel.

Some impact from Skrtel that.

Hope in your heart on the forum:

The players have no-one else but themselves to blame for this. Shocking mid-table mentality.

Decision to bring Skrtel on ahead of Toure an odd one & that, along with numerous missed chances, cost us. #LFC

Skrtel has no place here anymore. We don't tackle like that anymore (penalty) or dive in.

LFC conceded as many goals in one half with Skrtel in the team than in their previous 795 minutes without him, plus he gave away a penalty.

Expecting #Klopp to take responsibility for that. It's his style. #LFC

I don’t think Klopp will allow that to happen again. Glad I missed the game now.

But he's a "loyal servant". Idiots.

Only positives to take from today: a) those idiots who always rated Skrtel now know how bad he is and b) Klopp does too. Has to go in summer

Imagine blaming Klopp for bringing on a 31 year old CB with 300+ games experience and a £32.5 million striker. They have no excuses.