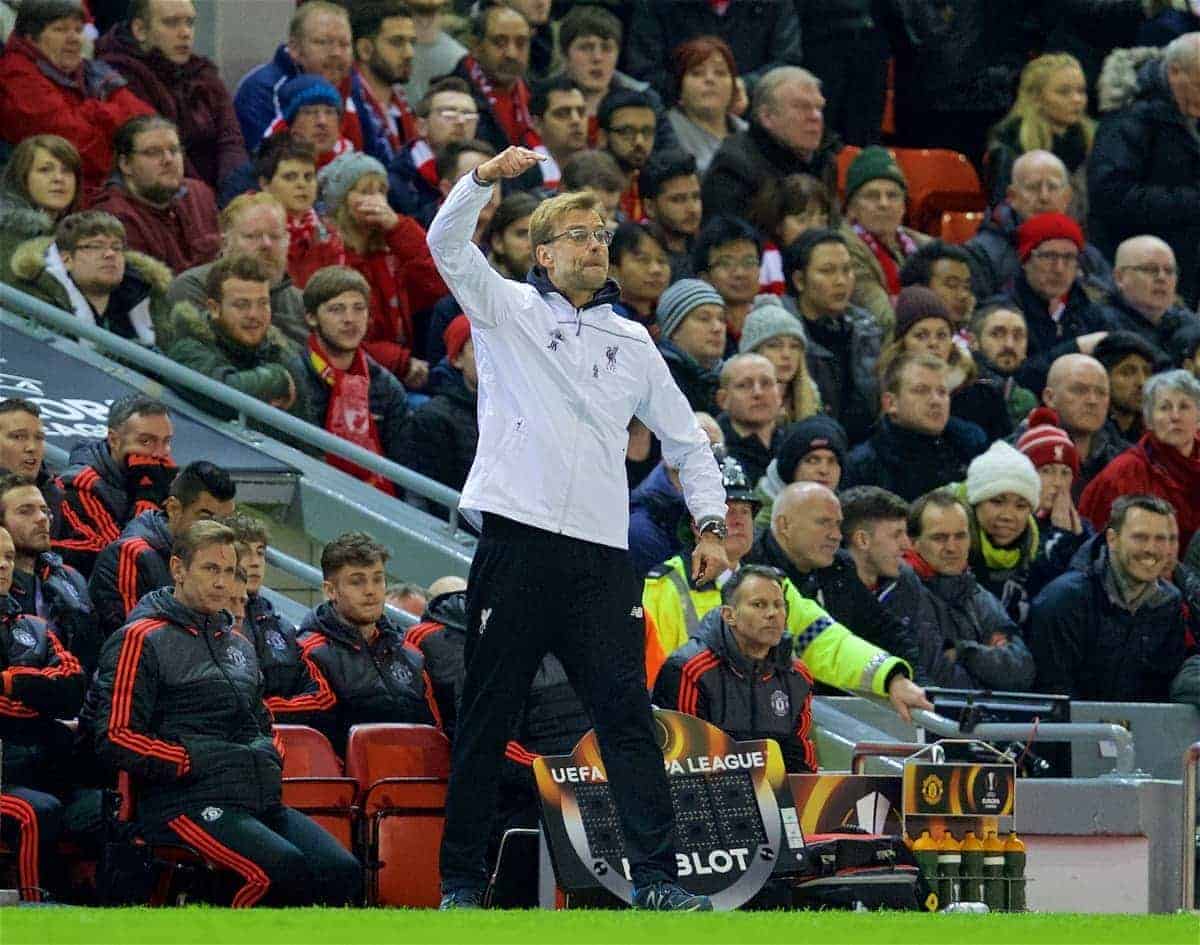 Liverpool captain Jordan Henderson sounded a note of caution after his side beat Manchester United 2-0 at Anfield to claim the advantage in their Europa League tie.

Roberto Firmino stabbed in the second goal to make sure of a win which had seemed a formality during the first half, when Liverpool played United off the park but somehow had only Daniel Sturridge‘s penalty to show for it.

The final result was greeted with huge cheers from the Anfield crowd but Henderson told BT Sport Europe the tie is far from over.

“Obviously we’re confident but a two-goal advantage can be dangerous at times,” Henderson said.

Liverpool were rampant in the first half as United goalkeeper David De Gea performed heroics to limit the damage, but there was nothing he could do about Sturridge’s penalty after Memphis Depay was penalised for a tug on Nathaniel Clyne – a decision disputed by United.

“I didn’t see it,” Sturridge said of the clash. “I wasn’t involved and I didn’t see it, but the most important thing is the team wins the game. That’s what matters.”

Sturridge was withdrawn just after the hour mark, but the England man said there was no fitness concern.

“It’s the manager’s decision to choose which players he wants to play,” he said.

“I’m fine. I’m fit. I’m ready to play as many minutes as the manager is prepared to give me.”

“Liverpool created an atmosphere that was fantastic,” he said.

“They played very good in the first half and we could not cope with their pressure. David de Gea was fantastic, but I think it was a cheap penalty.

“In the second half we changed the shape and had much more of the game but we didn’t create many chances and they scored another cheap goal.”

Asked to expand, Van Gaal claimed there was an offside in the build-up to the second goal, while suggesting the contact Depay made on Clyne was outside the area and not enough to bring the Liverpool player down.

“The referee cannot see that, but the hold is outside the box and then he is falling down,” the Dutchman said.

“You have to be sharp when you give it. It is a cheap penalty. They deserve the win, but the goals they got are cheap.”

In the dying stages of the game Emre Can went down holding his face after an off-the-ball clash with Marouane Fellaini, but Van Gaal said he did not see the incident which could yet land his midfielder in trouble.

“I haven’t seen that,” he said. “I have to say Fellaini was one of the best players on the pitch tonight and I’m very sorry when he makes mistakes like that. But I do not know about this because I have not seen it.”

Jurgen Klopp was delighted with the result even if he admitted his side could have scored more.

“It was a good start and a good finish,” he said. “We could have scored one or two goals more, which sounds crazy I know when you’re playing against Manchester United but we had the chances, you saw them.

“But at the end, 2-0. If you said this to me before the game of course I take it. We know it’s not over. We have to drive to Manchester and play there again but this is the best thing we can do.”