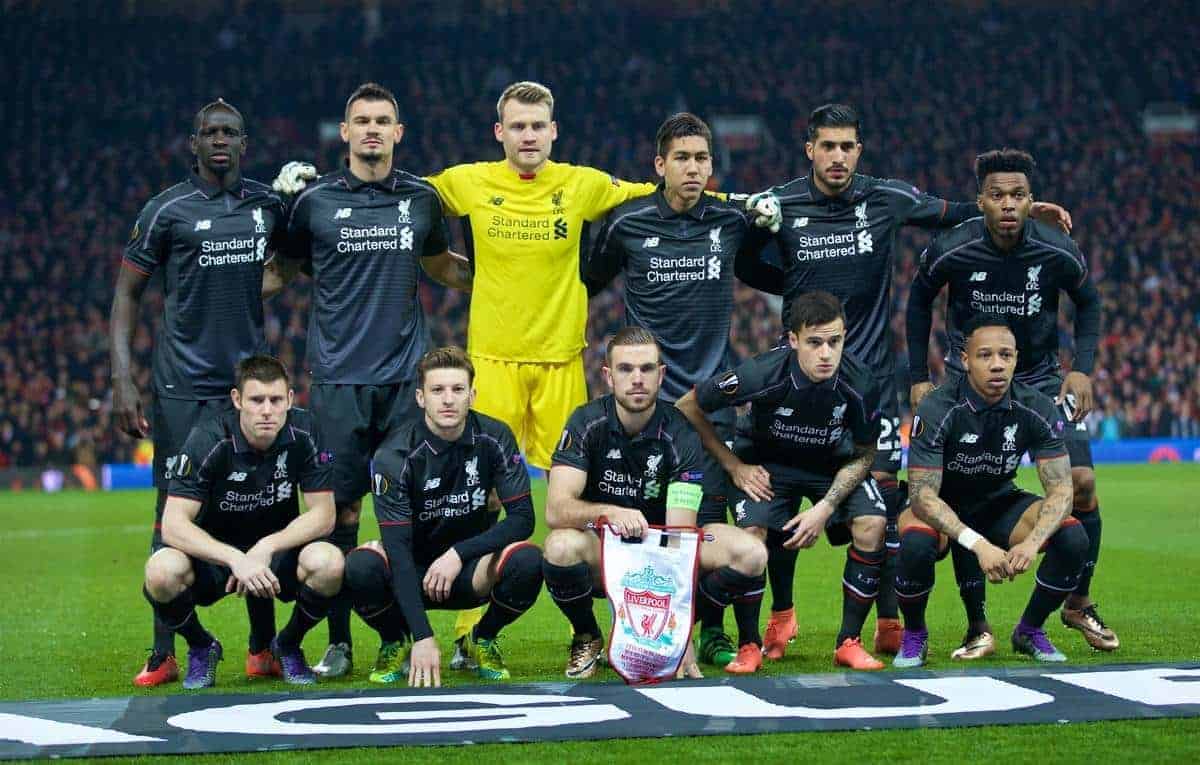 Liverpool’s 1-1 draw away to Man United on Thursday earned them a place in the Europa League quarter-finals. We assess the performance of each Reds player at Old Trafford. As has been the case recently, Mignolet had a quiet night at the office, despite United dominating at times in the first-half.

He made one good save to deny Jesse Lingard, but in the lead-up to it, he should have simply caught the cross. A solid but unspectacular night. Better with the ball at his feet.

Without question, this was Clyne’s worst performance in a Liverpool shirt, having been such a model of consistency all season.

The 24-year-old conceded his side’s penalty for a foul on Anthony Martial, and he was given a really tough night by the Frenchman all evening. Strangely nervous.

Lovren’s form is going very much under the radar in a lot of ways, and he was once again imperious at the heart of the Liverpool defence.

He was strong in the air, reliable on the ball and read the game excellently, in another hugely pleasing 90 minutes for the Croatian.

Mamadou Sakho divides opinion, but this was a night when his doubters surely realised what all the fuss is about. The 26-year-old was absolutely colossal from start to finish, making a staggering number of interceptions and headed clearances, and his passing was typically crisp.

Sakho is one of the first names on the team-sheet these days, and this was his best performance of the season. Man of the Match.

Tasked with playing at left-back in the absence of the injured Alberto Moreno, Milner did a very good job, outlining his versatility.

He was rarely beaten by the pace of Lingard, and his industry and experience shone through on a night when Jurgen Klopp needed his older players to come to the fore.

Milner will forever be loathed by some, but situations such as Thursday’s second-leg are perfect for him.

Can ran Sakho close as the Reds’ star man, with the German fantastic all night long.

The 22-year-old’s form has been superb in 2016, and he completely bossed the United midfield with a great mix of pace, power and creativity.

One back-heel in the second-half was simply beautiful, and he was tremendous in every aspect of his play.

The captain is being completely outshone by his midfield partner at the moment, and he was again solid rather than influential at Old Trafford.

Henderson’s usual work ethic and understated passing were there for all to see, but he never quite managed to stamp his authority on the game.

Missed a glorious chance in the first-half, that fortunately didn’t prove costly. Finishing needs to improve.

Having been so rampant in recent weeks, this was a more low-key, slightly frustrating performance from the England international.

His work off the ball could not be questioned whatsoever, but he sometimes held onto the ball for too long and didn’t always display enough physical strength.

Did little wrong, in fairness.

For the first 44 minutes of the match, Coutinho was having a real stinker of a display. He was losing possession, not playing the easy ball and played his part in United winning a penalty.

He redeemed himself with the magical all important equaliser, however, lofting a magnificent finish past David de Gea to put Liverpool in complete control.

From that point on, he grew and grew in stature, with one incredible dribble a joy to watch. Once again, he proved to be the Reds’ attacking talisman.

Firmino has been Liverpool’s most influential performer so far this year, contributing goals and assists at a relentless rate, but he was fairly quiet in general on Thursday evening.

The 24-year-old’s typical class and guile caught the eye on occasions, with some lovely passes almost going under the radar, but he couldn’t quite get into the game.

Like Lallana, his pressing and all-round defensive work helped played a big part in Klopp’s men seeing off the challenge of United.

A poor night at the office for the striker, who has not looked himself for a number of weeks now.

He hit the crossbar with a devilish first-half free-kick, but he was otherwise a little lethargic both on and off the ball.

The Englishman looked disappointed to be substituted for Divock Origi, but he never did enough to merit staying on. It is understandable that he is taking time to get back into his stride.

The Belgian looked quick and lively, and helped stretch the United defence in a way Sturridge failed to. Very promising footballer.

The tie was dead and buried when he came on, but he did nothing wrong and kept the ball ticking over.

Another wonderful night for the Liverpool manager, who got his tactics spot on and got the job done at an intimidating ground.

The German’s decision to play Milner at left-back paid dividends, and he has improved the defence immeasurably since coming in.

You can see the players taking to Klopp’s philosophy more and more by the week, and the future is very exciting for anyone associated with the club.