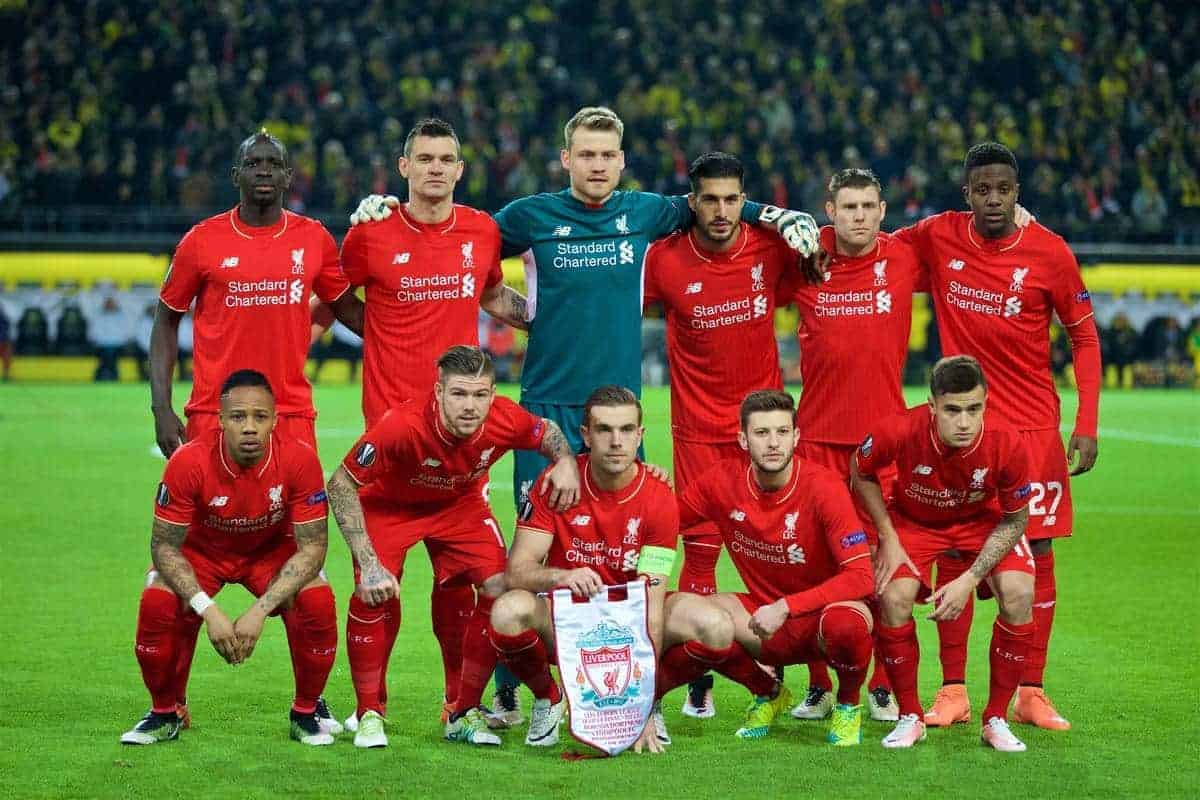 After Liverpool’s positive 1-1 draw against Thomas Tuchel’s Borrusia Dortmund, we assess the individual performances of each Reds player on the night.

The Belgian had his own skill competition going on early first half producing two calm Cruyff turns when being charged down, and it epitomised his welcome, calm manner between the sticks on the night.

Showed good handling throughout, made routine saves well as well as making a big one from Marco Reus on half time, and was decisive with his punching from shots and crosses.

It was a night that would thoroughly test Clyne’s defensive capabilities, and he did well overall at the Westfalenstadion in his usual right-back role with a defence-comes-first display.

Had a sloppy start giving the ball away leading to a chance and also allowed Schmezler to ghost in a couple of times which he didn’t get to grips with.

But did a disciplined job, was reliable one-against-one and supported well when required.

Deployed in a limited defensive role next to the leading Sakho, the Croatian stepped up to produce a similarly impressive display to his partner.

Lovren cleared his lines well, dealing with danger decisively throughout, and made one absolutely vital block to deny Pierre-Emerick Aubameyang before half-time.

Should have done better with his header from James Milner’s free-kick in the first half, and sliced one wild clearance, but overall another impressive display as a partnership develops with Sakho.

Picking up from where he left off in the previous round against Man United, the Frenchman was once again a colossus at the heart of the Reds defence.

Made a number of crucial blocks – including a goal-saving lunge on Henrikh Mkhitaryan first half – and timely interventions, read situations brilliantly, and provided his usual composed manner in a rock solid defensive display that saw the lethal Aubameyang kept quiet.

Magnificent once again from the Reds’ best centre-back.

The Spanish left-back enjoyed a decent evening overall in his left-back role, showing a much better defensive instinct – even if he did unnecessarily burst forward late on – on a challenging night.

Moreno was more disciplined in his defensive work overall– picking and choosing carefully when to support the attack – and did well one-against-one all evening.

Can count himself lucky not to have received a card for a brainless lunge close to the corner flag late on.

The German has grown immensely under Klopp, and he showed his vast talent again with a commanding display against Thomas Tuchel’s side.

Had a mixed first half, producing some sloppy moments in possession while excelling in his destructive work, but really grew into the tie in the second period, dominating central areas with his power and strength to break up play while also showing better composure on the ball.

On nights like in the Westfalenstadion, big players are needed to stand up and lead, but the Reds skipper failed to provide the influence needed on the big stage.

Henderson was sloppy in possession time and again and was bypassed in midfield, lacking the mobility that saw him become such a key part of the team – possibly still struggling with his ongoing heel injury.

Subbed at half-time due to injury, but could have no complaints if it was tactical anyway.

With Firmino back it was anticipated that Milner may be the man to make way for the Brazilian, but he kept his place, moving to a central role in Liverpool’s three-man midfield.

The vice-captain lacked quality on the ball at times, but impressed with his usual selfless work rate and desire, which saw him rise highest to flick Divock Origi in on goal.

The Brazilian had to balance carrying the creative threat and support for Origi with essential defensive work, which he did well on the night from his left-sided role.

Only a stunning save from Weidenfeller denied Coutinho firing the Reds back in front after Mats Hummel’s leveller – before he went close again – and though he wasn’t the Reds main man on the night, it was another decent showing from the 23-year-old.

Lallana has become an influential figure for the Reds, but the England international turned in a quieter display – perhaps to be expected.

The 27-year-old was tidy in possession – though lacked productivity and creativity – but performed an important role with his off-ball work, working tirelessly with his pressing to assist Clyne down the right-hand side.

All focus was on the Belgian striker after being given the nod ahead of Sturridge to lead the line, and he vindicated Klopp’s decision producing an excellent display spearheading the Reds.

Used his physical attributes and pace perfectly to unsettle the Dortmund defence and provide the mobile, pressure-relieving outlet Klopp wanted, and he took his chance superbly when it came.

Could – and perhaps should – have scored a second shortly after, but worked tirelessly all night and showed the huge potential he boasts in the 84 minutes he played. Excellent from the youngster.

The Welshman provides some vital attributes to the Reds, and they were all evident in a good 45-minute showing.

Provided some much-needed control in midfield with his tenacity and sensible use of the ball and brought a calmness to Liverpool’s game which saw the Reds settle and produce a positive second half.

The Brazilian had no real time to make an impact, but he was busy and industrious even if his touch was a little off.

No time to make his mark on the game, but showed his class with a slaloming run that almost resulted in a shooting opportunity before being crowded out. With fitness and form very much dictating, Klopp’s selection was relatively straightforward with Firmino clearly not fit enough to play from the start.

The switch to a 4-3-3 formation away from his preferred 4-2-3-1 was a wise one, with the extra midfield security it provided, even if the Reds’ midfield was lacklustre at times in the first half.

Klopp also made a big call in starting Origi over Sturridge, and it proved a truly inspired move from a tactical perspective, with the Belgian giving the Reds energy, pace and a threat on the counter, while he of course netted an absolutely crucial away goal.

Used his substitutes well – even if Allen’s introduction was forced – to stabilise his team when under pressure, and set up his side perfectly for a trademark European away-leg performance.

An excellent result and performance on an emotional night for the Liverpool boss.