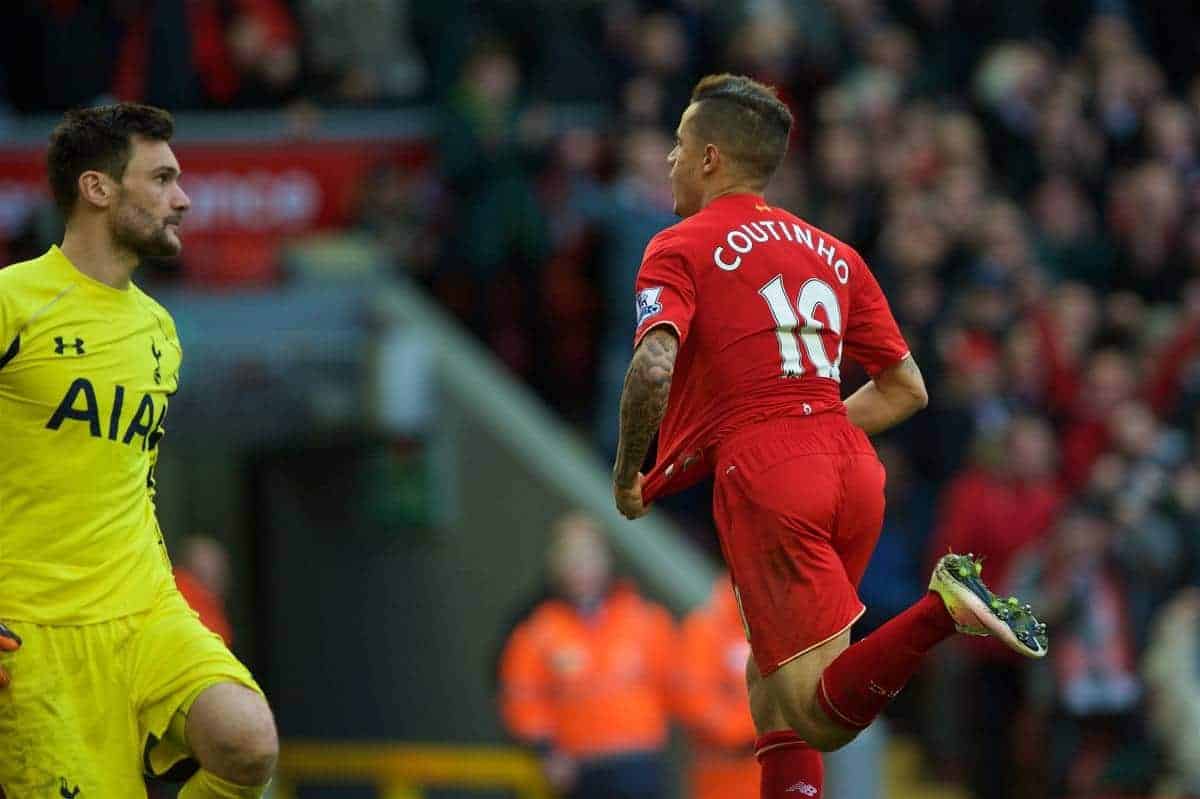 Liverpool held title chasing Tottenham to a 1-1 draw at Anfield in an entertaining game that produced a number of talking points.

Jurgen Klopp’s Reds battled to a hard-fought draw in an eventful game that either side could have claimed three points from.

Philippe Coutinho’s composed strike put Liverpool ahead in the second period, before a sharp finish from Harry Kane earned Spurs a point, with neither team able to find a winner despite a number of close efforts.

It was a result that does little to help either outfit in their respective Premier League battles, and here are the talking points from the draw.

Liverpool’s central defensive uncertainty was evident again with the contrasting displays of Lovren and Sakho at the heart of the defence.

Sakho’s uncharacteristically sluggish display summed up the sloppy nature of the first half at Anfield, with the Frenchman indecisive in clearing his lines and careless in possession, thus putting the Reds under all kinds of pressure.

Making for a dodgy left-side of defence with Kane lurking, thankfully Lovren was alert to cover his struggling partner with three timely interventions, including a crucial block on the eventual scorer, sweeping up well with some strong defending including thwarting Kane again on the break.

Though beaten too easily for the equaliser by getting too tight to Kane – allowing him to spin and precisely find the far corner – Lovren barely put a foot wrong and his composed manner undoubtedly helped Sakho settle in for a much better second 45 minutes.

A tighter overall display will be needed however against a lethal Borussia Dortmund attack on Thursday night.

An entertaining game saw chances at both ends with each goalkeeper needing to be in inspired shot-stopping form, which Mignolet thankfully was.

The Belgian showed the best of his game making some excellent saves including strong one-handed stops to deny Christian Eriksen and Moussa Dembele to keep Liverpool level, also showing some alert ‘keeping to thwart Dele Alli as he was about to strike.

But the worst of the Reds No.25 was evident again, with Mignolet causing panic at the back with his poor decision making and woeful distribution causing unnecessary pressure – with the Belgian posting a shambolic 19.2 percent passing accuracy.

After causing panic coming out to clear when he didn’t need to, he then almost gifted Spurs a goal blasting his clearance straight into Kane which luckily landed in the Kop rather than the net, and later came for a cross, failing to get anywhere near it leaving himself stranded.

Mignolet’s Jekyll and Hyde display handed yet another reminder to Klopp as to why he must be upgraded this summer.

The Brazilian has been the main man for the Reds recently, and he was again at Anfield producing a dazzling display.

Releasing Sturridge for a one-on-one which the striker should have scored, Coutinho was the Reds’ chief creator throughout – finding space superbly when coming in-field from his left side role.

And as the game unfolded, the feeling that it would come down to the Magician to produce the goods again grew; pleasingly, he delivered emphatically again stepping up to the mark in another big-game.

Linking brilliantly with Daniel Sturridge, he slotted home delightfully after a neat one-two exchange, firing Klopp’s side ahead to continue his good run of scoring form with his third goal in as many games – which so nearly become four with his effort flashing wide of the far post.

With Dortmund next up, the Reds will need Coutinho in this kind of form once again if they are to have any chance against the Bundesliga side. It was a tale of two strikers at Anfield with the goal-getters at either end proving key to the result.

In a first half of opportunities, the best fell to Sturridge who squandered a huge chance to put the Reds ahead, firing straight at the excellent Lloris when one-on-one with the Spurs ‘keeper – an effort the 26-year-old usually so reliably finds the net with.

Sturridge had plenty of time and space but opted to hit it first time. He has to finish those kinds of chances.

And picked out brilliantly by Coutinho after the break with a pin-point floated cross, Sturridge uncharacteristically wasted another good chance, heading over the bar when he should at least have hit the target.

There was a sense the misses would prove costly as Spurs created more as the game developed, and they did, with Kane showing the lethal finishing abilities that evaded his England teammate on the day to swivel and drill into Mignolet’s far corner.

Had Sturridge had found the net as ruthlessly as his opposite number, it could have been a different story.

But Klopp found his ability to swing the game in his side’s favour limited by a bench lacking genuine quality to turn to.

The German, frustratingly, had to use his changes to manage the game and ensure of a draw instead of going all out for what would have been a huge three points.

The Reds boss took the safe option in introducing Origi for Sturridge, rather than boldly going with two up top, and he could have withdrawn Milner earlier, but with only an out-of-form Jordon Ibe available it’s understandable as to why Klopp hesitated with a lack of proven attacking talent at his disposal.

A lack of quality depth hindered Klopp’s game-changing ability, something which the boss is sure to address this summer.