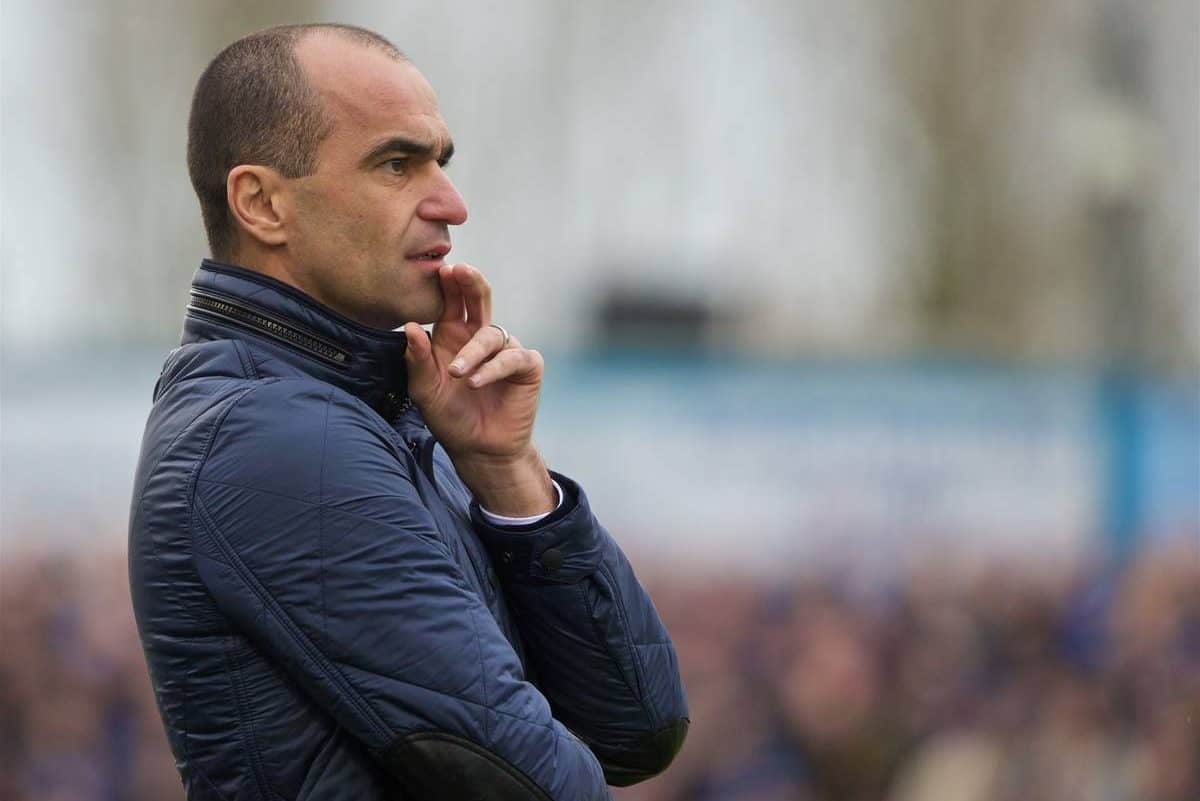 Everton manager Roberto Martinez will struggle to field a comprehensive back line in Wednesday night’s Merseyside derby at Anfield.

The Spaniard, who will have one eye on Saturday’s FA Cup semi-final against Man United as he plans for the trip across Stanley Park, has been hampered with injuries throughout 2015/16.

With the pressure mounting on Martinez, he could be without Seamus Coleman, Phil Jagielka and Leighton Baines, as his injury crisis deepens.

Jagielka (knee) and Coleman (hamstring) have been ruled out of contention, while Baines remains a doubt after he continues his recovery from a groin problem.

If Baines is deemed fit to feature, Martinez’ defensive line is likely to comprise of the England left-back, centre-backs Ramiro Funes Mori and John Stones, and one of Brendan Galloway or Bryan Oviedo at right-back.

With Stones out of form, Baines lacking in match fitness and neither Oviedo or Galloway a fully functioning Premier League right-back, Liverpool’s hopes of victory are magnified.

Meanwhile, Martinez could still be without Aaron Lennon and Tom Cleverley, though James McCarthy is available after suspension.

Tony Hibbert and Tyias Browning are long-term absentees, with the former stepping up his recovery with a view to returning for Everton‘s U21s next week.

Speaking ahead of the game, Martinez hinted at fielding a rotated lineup to take on Jurgen Klopp‘s Reds.

“We had our suspensions and injuries but our way of approaching games is always the same,” he explained.

“Whoever is on the pitch is expected to make our shirt proud, our fans proud, and play to win wherever we go and whoever is available, it is no different.

“We have been in a period of five games in two weeks so the focus has been game-to-game. That’s not going to change.

“In the same way, the semi-final at the weekend is just around the corner and is part of the work we do tomorrow in the game, straight away there will be some recovery strategies in place because the games are so close to each other.

“Nothing takes the focus away from a Merseyside derby, against a team with a very strong momentum, and the focus will solely be on that game.”

Romelu Lukaku and Ross Barkley could return to Martinez’s starting lineup at Anfield, but the 42-year-old’s clear focus on the FA Cup, and his multitude of injuries, suggest Everton could struggle against Liverpool.

With Klopp’s side gaining momentum by the game, and with most of the German’s first-choice lineup rested in Sunday’s 2-1 win at Bournemouth, the Reds will be in a confident mood.

Though it would be unwise to predict a whitewash, Klopp’s first Merseyside derby comes at the perfect time.