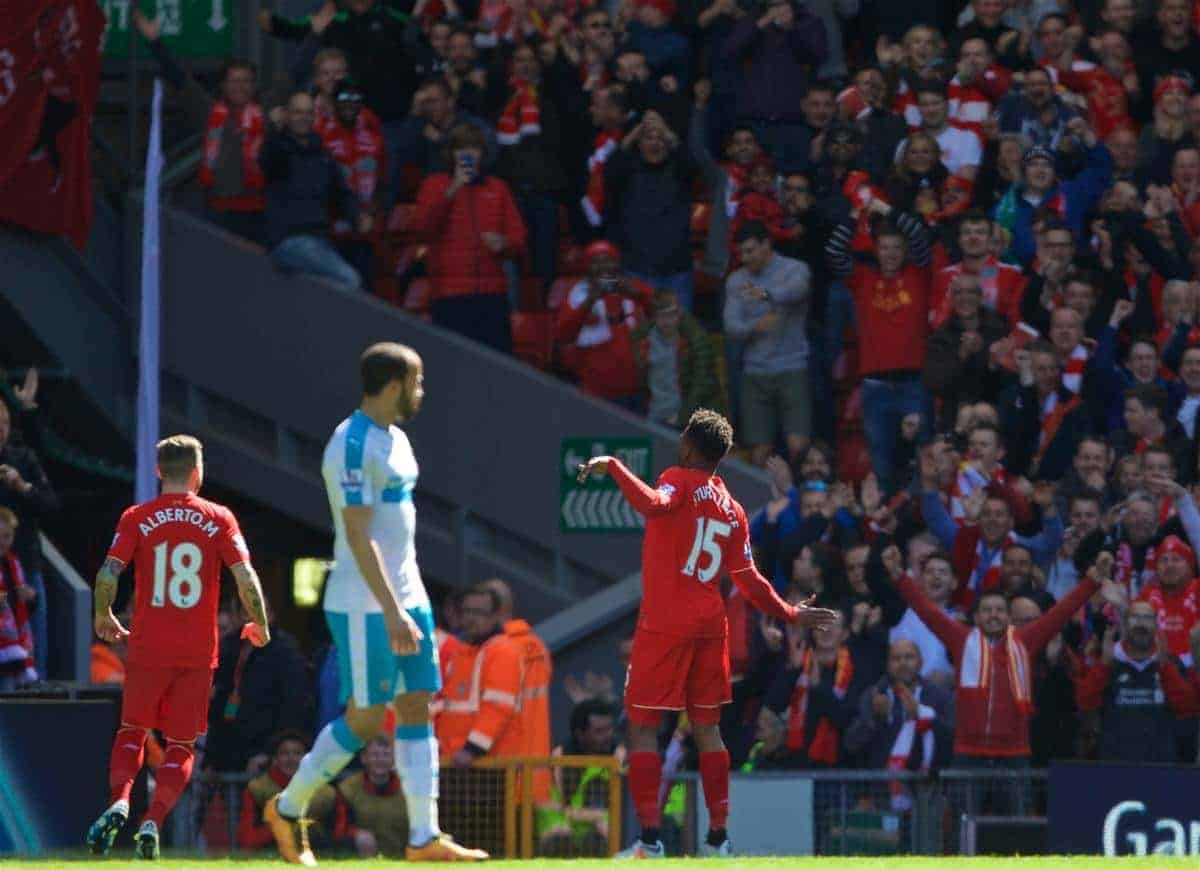 Liverpool disappointingly drew 2-2 with Newcastle at Anfield on Saturday. We assess the performance of each Reds player on the day.

After some encouraging, faultless form in recent weeks, Simon Mignolet once again showed why he must be replaced as Liverpool’s first-choice goalkeeper this summer.

The 27-year-old had nothing to do in the first-half, but his shocking misjudgment of Vurnon Anita’s looping cross allowed Papiss Demba Cisse to pull a goal back.

It changed the entire feel of the game, with the Belgian again proving to be the weak-link.

The right-back was given a chance to shine with Nathaniel Clyne rested, but he never did enough to suggest he is a long-term option for Jurgen Klopp.

He lacked a spark going forward, and may feel he could have marked Cisse better for his goal. An admirable attitude, but not quite up to it.

A solid but unspectacular afternoon for the Reds’ veteran centre-back, who came in for Mamadou Sakho at the heart of the defence.

Everything the Ivorian did was reliable, but in truth, he was never tested enough to merit a higher mark.

For much of the game, Lovren was in the same boat as Toure, with the 26-year-old continuing his improved recent run of form.

He didn’t cover himself in glory for Jack Colback’s equaliser, however, with his poor clearance duly punished, via a deflection off him.

The young Spaniard enjoyed a lively afternoon down the left flank, proving to be a constant outlet.

He played a key role in both Daniel Sturridge and Adam Lallana‘s excellent goals, crossing low for his two teammates, and he was largely solid defensively.

Man of the match for the Reds.

A little like Randall, Stewart did little wrong at Anfield, but there was a feeling that he was just slightly off the pace.

The 22-year-old only ever chose the safe option on the ball, perhaps highlighting a lack of creativity, but he read the game well from his deep-lying position.

Allen has been one of Liverpool’s standout performers in recent weeks, and while he never hit the heights of previous performances, he again had a noticeable influence on proceedings.

The Welshman looked slick and at ease in possession, he pressed well and was subtle in his reading of the game. Another decent day at the office.

The in-form 30-year-old was full of typical running and industry from start to finish, but he couldn’t quite help inspire the Reds to victory.

His final ball was invariably understated but effective, and he highlighted his versatility by impressing at right-back during the closing stages.

Not at his very best, but still a pleasing display.

There can be no doubting that Lallana has been one of Liverpool’s most improved players this season, and he shone against Newcastle.

The England international curled home a superb effort to give the Reds a 2-0 lead, and he was a class act throughout the opening 45 minutes.

His influence diminished after the break, and he was replaced late on by Sheyi Ojo. Klopp clearly rates Lallana very highly.

The Brazilian is not quite firing on all cylinders at the moment, despite there being the usual elegance on show at all times.

He was guilty of losing the ball a little cheaply against the Magpies, and showed a lack of physical presence on a few occasions as well.

A slightly disappointing afternoon, considering what he is capable of.

Liverpool made the perfect start, with Sturridge firing a typically lethal finish into the Kop net with barely a minute played.

He was brimming with confidence and quality for much of the game, but like so many, he seemed to switch off in the second-half.

Occasionally guilty of not giving the easy ball. The 29-year-old played a nice through-ball to Sturridge, but was otherwise quiet.

Slightly below-par cameo from the brilliant South American, who looked a threat but played some very wayward short passes.

No time to really make a proper impression on the match.

The Liverpool boss named a stronger starting line-up than some expected, and for much of the game, it looked to have paid off.

It could be argued that the 48-year-old allowed his players to take their foot off the gas after the break, but maybe energy was being preserved ahead of the Europa League semi-final against Villarreal.