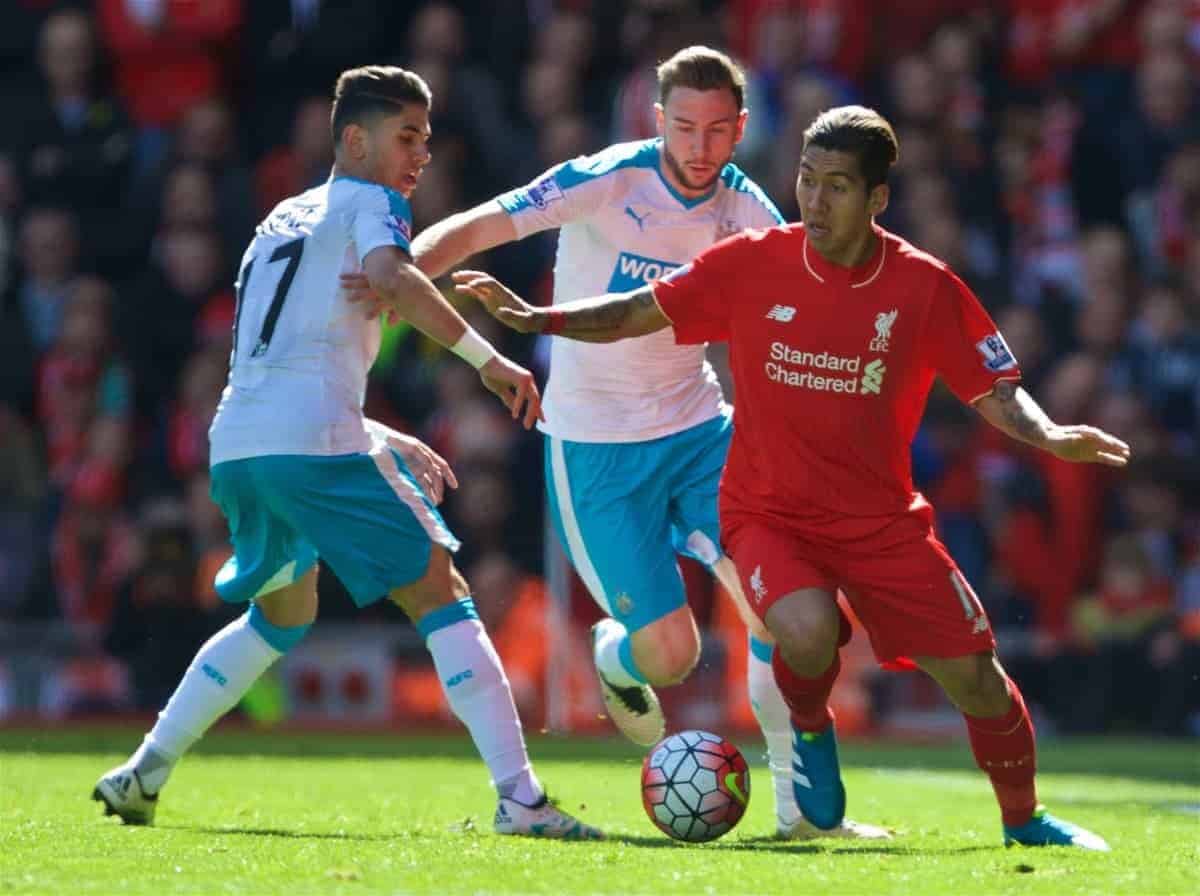 Liverpool threw away a two-goal lead to draw 2-2 with Rafael Benitez’s relegation battling Newcastle on the Spaniard’s Anfield return.

There was some shock news to start the day as Liverpool announced that Mamadou Sakho is subject of an UEFA investigation for possibly failing a drug test, and that the Frenchman will not be considered for selection – despite being free to play – while the process is undertaken.

The Frenchman was therefore one of five players to make way as Klopp altered his side from the Merseyside derby victory, with Kolo Toure stepping in to partner Dejan Lovren against the Magpies.

Connor Randall returned in place of Nathaniel Clyne at right-back for his first league start at Anfield, with Alberto Moreno continuing on the opposite side, while James Milner was joined in midfield by Kevin Stewart and Joe Allen with Lucas Leiva and Philippe Coutinho making way.

Daniel Sturridge was the final change as the in-form striker replaced the injured Divock Origi, with Adam Lallana and Roberto Firmino working in support of the England striker.

Benitez named the same team that picked up a 1-1 draw against Man City in midweek, with star man of the season, Georginio Wijnaldum again named among the substitutes at Anfield.

There was one more surprise change, with Andre Marriner stepping in at late notice in place of Martin Atkinson, who reportedly suffered injury on a UEFA fitness course this week, to referee for the afternoon.

Liverpool made a delightful start to the afternoon, taking the lead inside the first two minutes of the contest at a time the Kop chanted Benitez’s name.

Moments after Simon Mignolet was called into early action to clear with Ayoze Perez lurking, a quick free-kick from Alberto Moreno found Sturridge, who controlled brilliantly on his chest before firing on the turn into the far corner of the net from the edge of the box.

It was the perfect start, one that gave the Reds control thereafter, but the buoyant mood was lowered soon after with early injury scares to Moreno, who went down clutching his knee, before Lovren then took a whack to the throat. Thankfully both continued.

After a blistering start the game settled with Liverpool firmly in the ascendency, and in confident mood, Sturridge tried his luck again with a speculative effort from 25-yards that flew narrowly over.

Klopp’s side displayed some lovely stuff with Adam Lallana, Roberto Firmino and Joe Allen orchestrating the game, and a couple of pieces of slick approach play just broke down with the final pass lacking.

But on the half-hour mark the bright Lallana doubled the lead, after a great move saw Moreno provide again, rolling the ball into the England international on the edge of the box where he curled home a beautiful left foot strike into the top corner for 2-0.

From then the Reds were in cruise control and only a last ditch challenge prevented Firmino shooting at goal to make it three, moments before the Brazilian then saw his appeals for a penalty turned down after his cross hit Paul Dummett’s hand.

In a rare venture forward from the visitors, Perez also saw a tame penalty shout waved away after tumbling under pressure from Randall as a cross came in.

Moments before half time Vurnon Anita lashed Newcastle‘s best effort wildly over the bar as he arrived from deep, and Liverpool went in at the interval two goals up and in complete control.

Just like the first half there was another sharp start in the second 45, with the visitors instantly halving the deficit three minutes after the restart.

A deep cross to the back-post from Anita saw Cisse head into an empty Kop net, with Mignolet caught in no-man’s land as he came out in attempt to deal with the high ball in but invariably got nowhere near it.

The Reds were shell-shocked with Newcastle grabbing a foot-hold in the game, and a second penalty appeal of the afternoon was dismissed by Marrinerr, who adjudged Sturridge not to have been fouled despite the goal-scorer clearly being pulled down.

Surrendering possession from that incident, Benitez’s men, now looking sharp and confident, broke and should have levelled the scores.

After a blistering break from Townsend down the right, Cisse took too long to fire an effort a goal losing the chance to notch his second, and after being smothered by Mignolet in the box, he instead set the England winger to strike but his effort thankfully flew harmlessly over.

The Reds had lost their composure of the first half, but almost restored the two-goal lead ten minutes later, but Firmino saw his tap-in ruled out for offside after Allen’s initial header was saved.

Despite the warning signs, Klopp’s side failed to reassert themselves on the contest and they paid the price in the 66th minute when Jack Colback made it 2-2, converting Townsend’s cross with the aid of a deflection off Lovren.

Klopp set about turning the tide by introducing Brazilian duo Lucas and Philippe Coutinho for the final 20 minutes – in place of Randall and Allen, with Milner moving to right-back – seconds after Lallana came close to putting the Reds back in front firing an effort just wide.

The changes – to a 4-2-3-1 formation – saw the home side regain a foot-hold in the contest, but they struggled to create anything meaningful, with Stewart blazing wildly over the bar, before Sturridge sent a weak header straight at Darlow with 10 minutes to go.

Sheyi Ojo replaced Lallana for the final seven minutes – along with Jonjo Shelvey who received applause upon his Anfield return – as the youngster picked out Coutinho with his cut-back, only for the Brazil international to scuff his effort with five minutes to go.

Neither side could find a winning goal to cap-off an end-to-end second half with both teams having to settle for a share of the spoils.

Up next: The Reds turn their attention back to their quest for Europa League glory, as they travel to Spain for the first leg of their semi-final clash against Villarreal on Thursday night.