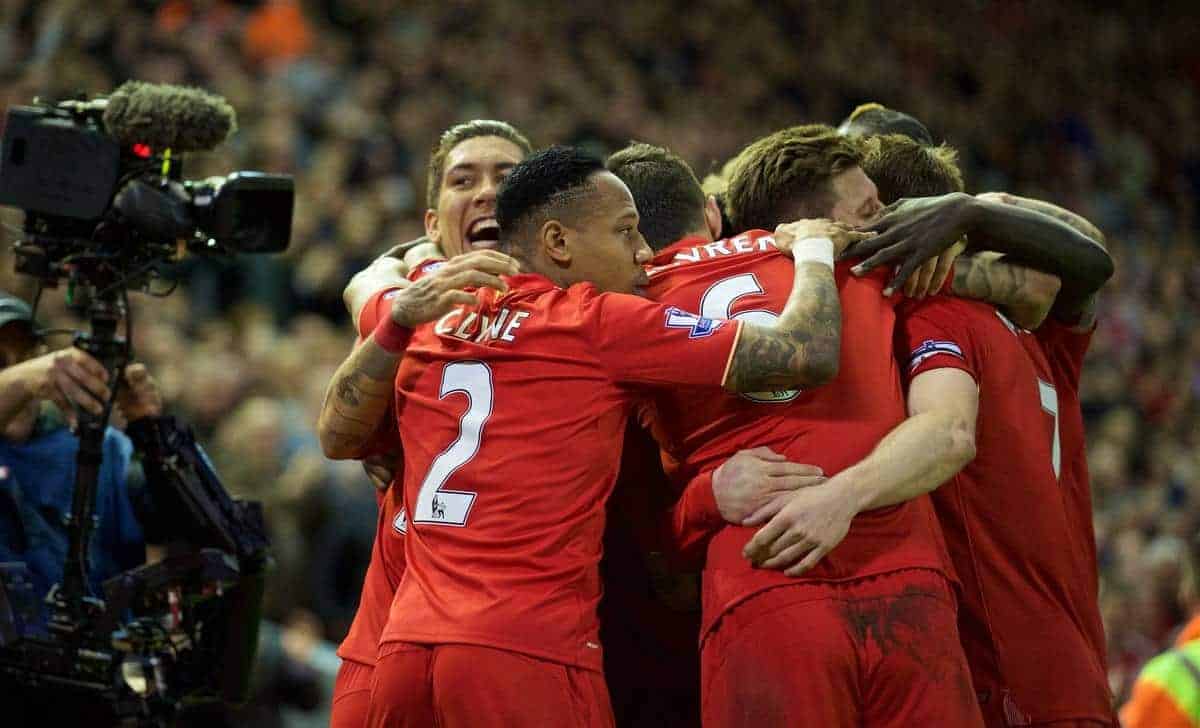 Following Liverpool’s Merseyside derby thrashing of local rivals Everton, we rate how the Reds performed on a fantastic night at Anfield.

The Belgian was practically a spectator on a brilliant night at Anfield having next to nothing to do all evening. Generous half mark added for the clean sheet. He’ll rarely have a quieter game!

The ever reliable right-back was exactly that once again at Anfield, where he turned in a typically solid performance.

Did his job defensively completely nullifying both Aaron Lennon and Kevin Mirallas respectively throughout the contest, and offered some welcome supporting runs – especially when the Blues went down to 10-men.

Nearly grabbed a goal after Lallana put him through which would have capped off a perfect night.

The Croatian resumed his partnership with Sakho at the heart of defence and produced another pleasing performance as he continues his Anfield renaissance.

Was beaten once by Mirallas in the first half when dragged wide, but was dominant in challenges – producing a brilliant sliding tackle at 0-0 to prevent Lennon breaking – and did everything with minimum of fuss. It was a brilliant night for the Frenchman who produced a spectacularly dominant defensive display against the Blues.

Sakho won headers, used the ball intelligently and completely dominated Romelu Lukaku – denying the Belgian with an outstanding challenge in the box in the first half – and capped off a fine display with a deserved second goal in as many games.

Crunching tackle on James McCarthy late on showed his desire to for a derby win – even at 4-0 up.

A typically energetic performance from the Spaniard in his left-back role, where he had a comfortable night.

Did his defensive job as required alongside offering good support when 11 v 11 – though his crossing was wasteful at times – and when Liverpool were a man up, he did his best to get on the score-sheet firing some speculative efforts at goal.

Given the nod over Allen to partner James Milner in midfield, the Brazilian enjoyed a good evening in the middle of the park.

Had problems with mobility chasing Ross Barkley on occasions first half and gave away a couple of clumsy free kicks, but mopped up well making some timely interventions, and kept the ball moving with some simple but tidy distribution.

Continuing in his preferred central midfield role, the stand-in skipper lead by example at Anfield where he turned in a fantastic and influential display.

Was energetic in the midfield battle and drifted well into wide areas where he caused havoc with his outstanding crossing ability that saw him claim assists for Divock Origi’s opener and Mamadou Sakho’s second.

Corner deliveries were also much improved showing what a good night it was for the 30-year-old.

The 27-year-old turned in a hugely pleasing display, setting the tone for the evening by driving the Reds forward and into the ascendancy.

Worked tirelessly off the ball – especially when even sides – and used his intelligent movement and link up play to pull the Blues apart which saw him play a key part in the second goal, exchanging a one-two with Milner.

Will perhaps be disappointed not to have found the net himself – especially with the one-on-one early on – but a very good evening for the England international.

The Brazilian magician continued his rich vein of form with another good display in the Reds attacking midfield.

Produced some lovely game-opening passes to cut the Blues apart when a level playing field – one with the outside of his foot in particular to release Lallana – and fired home the fourth of the night with a brilliant fizzing strike.

Not the most blitzing display the Brazilian will produce in a red shirt, but showed his subtle class at times with some lovely touches and clever play to link with Lallana and Coutinho.

Another who perhaps should have scored first half when one-on-one, shooting straight at Joel Robles after a brilliant piece of control set him in on goal.

The Belgian was the chosen man to spearhead the Reds over Daniel Sturridge, and he repaid his manager’s faith by continuing the striking competition with another goal-scoring display.

Took his header brilliantly from Milner’s cross, climbing well above John Stones, and was a constant threat all night with his power, pace and quick feet causing the Blues all manner of problems, leading Ramiro Funes Mori to resort to hacking him down.

A huge talent that is blossoming, and his ankle sprain was the only dampener on the night – something he will hopefully be back from sooner rather than later.

Coming on for the injured Belgian, Sturridge answered back emphatically by notching the third goal for the Reds just six minutes after coming on.

Showed his class for the 40+ minutes he was on the pitch and his readiness to become the main man for the crunch part of the season.

Could perhaps feel disappointed to have been overlooked from the start but picked up where he left off on Sunday with another good outing.

Supplied the ball for Coutinho to strike home with a crisp pass across and came close to finding the net himself on a couple of occasions.

Little time to make an impact but got straight involved and forced Robles into a save with one stinging left foot strike.

The Liverpool boss recalled the big guns and named just about the strongest side he could aside from overlooking Allen again and sensibly choosing to manage Sturridge.

Set-up his side perfectly and as a result watched Liverpool gain control quickly before taking the Blues to the cleaners.

Brilliant to have won the game in such commanding fashion and it was the perfect first Merseyside derby for the Reds boss.