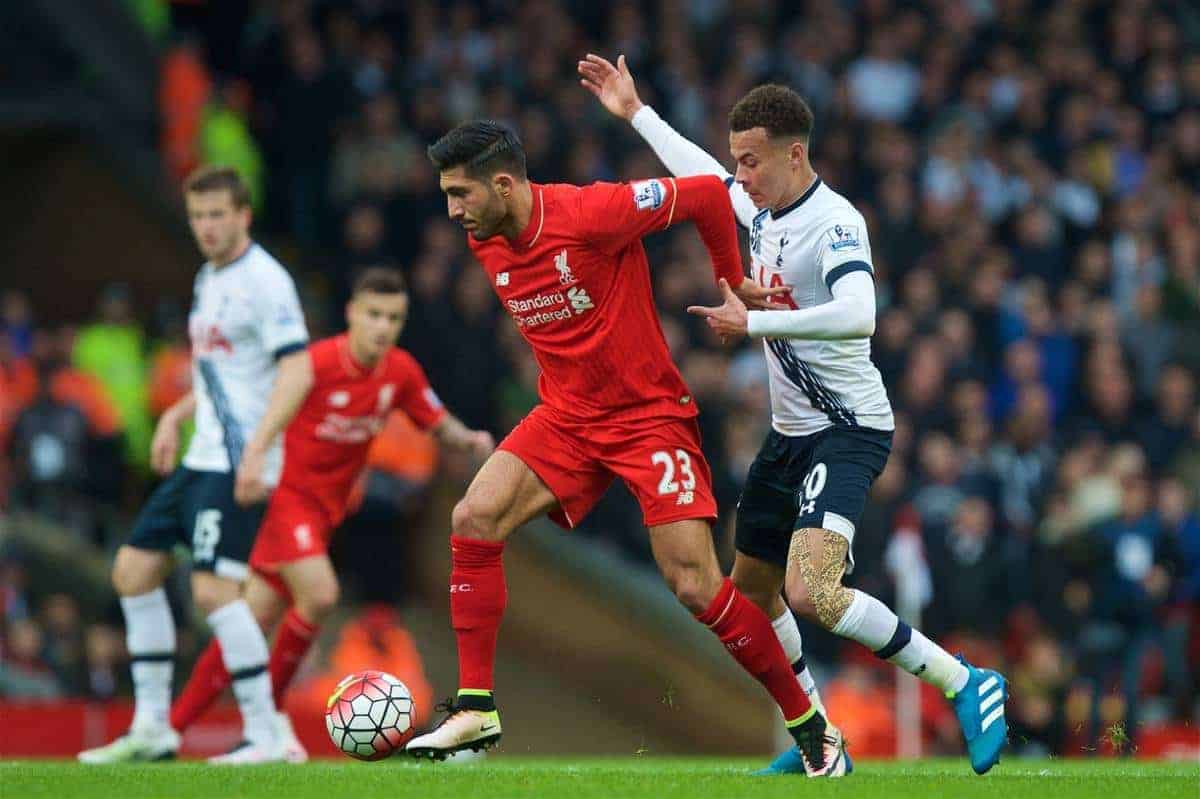 Liverpool drew 1-1 at home to Tottenham on Saturday evening, and we bring you the best social media reaction from during and after the game.

An enthralling match at Anfield saw both the Reds and Spurs take home a point apiece.

Harry Kane cancelled out Philippe Coutinho‘s beautifully-worked opener, and despite some late chances for either side, a winner could not be found.

The draw probably sees Liverpool’s top-four chances ended, but there were positives to take against a talented Spurs outfit.

The team news was released an hour before kick-off, and as is the norm these days, supporters had their tactical and statistical hats on:

Narrow team selection. There's no wide midfielders in that line up therefore no crosses. Don't agree with the line up and tactics. @LFC #LFC

Stat: Spurs have won just 4 out of their last 25 visits to Anfield in the Premier League.

Mamadou Sakho had a very shaky, error-strewn first-half, and fans expressed their frustrations with the Frenchman:

Sakho's on the ropes here ?

Mamadou's having one of those games so far….

After a tight, goalless first-half, social media gave its assessment of the opening 45 minutes:

Origi on for Milner at half-time. This Spurs defence isn't infallible as pundits make out. We've exposed it at times.

Half time note for #LFC and Klopp: Do not, repeat do *not*, bring on Martin Skrtel.

Henderson tidying up nicely at the back a few times. Sakho and Can can’t decide if they’re world class or Sunday league. Coutinho and Lallana looking dangerous.

Lovren and Milner the best so far. Sakho very shaky.

Liverpool ahead on points, but not much in it.

.@JHenderson and @Phil_Coutinho made eight tackles between them during the first half. Putting in a shift. pic.twitter.com/8LUW4mUxX1

There was delirium when Coutinho opened the scoring:

The Brazilian magician does it again in a big game. Genius at work.

Great work from Coutinho and Sturridge for the goal. Phil to Dan to Phil. Goal.

Wonderful goal to break the deadlock. Classy finish from Coutinho who now has 10 goals this season #LFC

Kane’s emphatic finish robbed Liverpool of all three points, but there was still plenty of positivity among supporters after the final whistle:

On the plus side, Lallana & Origi's improvement has been remarkable. The latter, however, needs to add goals to his workrate.

Good test ahead of Dortmund. High intensity game, Spurs nothing special, we will be under Klopp. A moment of brilliance cost us the points.

1-1. Spurs played well but so did LFC, quite evenly matched overall which shows how much higher up the table a consistent #LFC would be

Some awfully shaky defending, notably in the first half (Sakho had a ‘mare, and Moreno was all over the shop as well) contrasted by some absolutely LOVELY play in attack.

Need Firmino back against Dortmund.

Two good goals there. No complaints on Kane's.

#LFC goal threat with Sturridge on pitch >>>> any other combination we can play. This needs fixing in the Summer