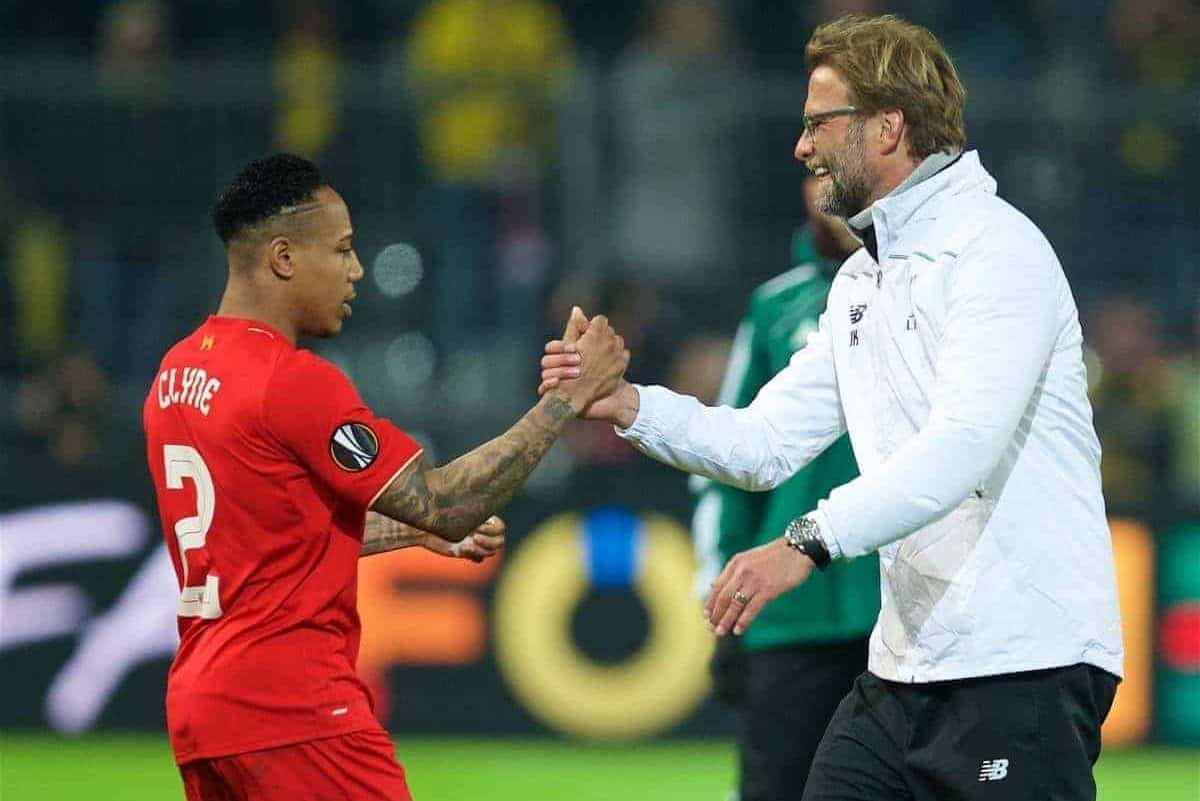 Following Liverpool’s spirited first-leg performance and positive result against Borussia Dortmund, we review how the media reacted to the stalemate.

Liverpool secured a slender advantage to bring back to Merseyside after battling to a deserved 1-1 draw on Jurgen Klopp’s emotional reunion with his former club.

Divock Origi latched on to James Milner’s flick-on to slot the Reds ahead with a vital away goal, but Mats Hummel’s headed Dortmund level just three minutes into the second period after Liverpool switched off and allowed the centre-back a free header.

Despite efforts at both ends, the two sides had to settle for a draw on a memorable occasion in the spectacular Westfalenstadion, and Klopp can certainly be very pleased with the efforts of his team to secure such a result.

The tie is now finely poised for what will be a special second leg at Anfield in seven days’ time, and here is how the media saw the gripping contest.

Claiming such a result against opponents of the highest level, some reporters felt it was a night Liverpool showed their re-emergence.

This was the night that Liverpool truly re-emerged as a genuine force to be reckoned with on the European stage.

Back at the scene of his greatest triumphs, Jurgen Klopp showcased the remarkable progress he’s already made in awakening another sleeping giant.

The Mail’s Martin Samuel felt it was another showing that displayed Liverpool’s progress under Klopp:

The odds may still favour Dortmund, simply because they are the stronger team, but this was evidence of Liverpool’s continued growth under Klopp — the win against Manchester United in the last round, and now this. Liverpool are finding ways of competing, toe to toe, against superior teams.

A knee injury sustained by captain Jordan Henderson blemished an otherwise excellent European performance executed by Liverpool’s players and masterminded by Klopp, 24 hours after he had warned that he knew Dortmund better than anyone by virtue of his seven-year reign. After securing a valuable away draw against the odds, there was much praise for Klopp’s tactical approach on the night.

It was not quite master against apprentice as Thomas Tuchel has hardly taken Dortmund backwards this season but Klopp still knows a thing or two about European football and – inside knowledge or not – his tactics were spot-on.

From Origi’s persistent running up top, occupying Dortmund’s entire back line, to the work-rate in midfield and the new dogged determination instilled in the defence.

But more importantly, he got his tactics spot on. His side pressed well when they could, and filled the spaces when they couldn’t. The full-backs got the balance between defence and attack right, and Liverpool looked dangerous when they found a chance to attack.

For that, the manager must take real credit. And when it came to his big selection decision, well…

As much as at any time this season, Klopp got what he wanted from his men last night. Fierce competition, resolute defending and energy to keep a far superior side at bay. Liverpool retain a puncher’s chance of progress.

Klopp set out to frustrate Thomas Tuchel’s side with supreme organisation, defensive resilience and the strength of Divock Origi leading the Liverpool attack.

The visitors delivered on every count and the end result, enhanced by Origi’s potentially precious away goal, was their finest European away performance since the Rafael Benítez era.

Klopp also received much credit for his inspired decision to start Origi over Daniel Sturridge.

Hunter wrote on this:

Dortmund had been consumed by Klopp’s return and he gave them a painful reminder of his ingenuity by starting Divock Origi in place of Daniel Sturridge.

Even with the requirements of the contest taken into account it represented a major call to start a raw 20-year-old over the team’s leading striker and a reminder to Sturridge of where he stands under Klopp.

Wherever his manager tells him to, basically, and the selection was vindicated by Origi’s first European goal for the club.

Chris Bascombe of the Telegraph agreed that Klopp’s Origi call was wise:

There were sound tactical reasons for Jürgen Klopp’s preference of Divock Origi, the youngster guaranteed to occupy Dortmund’s centre-backs with his pace.

The Belgian had to carry much responsibility, the onus also on him to relieve pressure and demonstrate how much his hold-up play has developed.

The golden touch he enjoyed during a seven-year joyride as manager of Borussia Dortmund did not desert Jurgen Klopp as he returned to his former playground on Thursday night.

The Liverpool boss had the courage to axe his England striker Daniel Sturridge and replace him with the raw Belgian youngster Divock Origi, who promptly supplied Liverpool’s critical away goal.

Vindication for Klopp here, too, in preferring Divock Origi to Daniel Sturridge up front.

Origi scored and even if his goal took a significant deflection, Klopp will feel his decision justified. Liverpool were always going to play this game on the counter and Origi held the ball up well. He may have scored a second, too, were it not for the quick wits of Weidenfeller.

Naturally, after netting a vital away goal, praise was unanimous for Origi, who many reporters felt repaid the faith shown by Klopp.

On the Belgian, the Mirror’s David Maddock noted:

As it is, the Belgian will not only take much confidence from his performance, but also a great deal from justifying the faith of his manager, who will believe in him for the future.

One of Klopp’s first instructions as Liverpool’s manager was to command the Belgian to put more bulk on his reedy frame and frequently here, his pace and strength had the better of Dortmund’s experienced defence.

Steven Kelly, in his player ratings for ESPN, assessed:

Superb and selfless display, sealed by what could be a vital away goal. Will be annoyed that he did not make it two just before half-time, especially as Dortmund equalised not long after, but his willingness to run all night and hold the ball up and wait for others to support him was a blueprint striker’s performance away from home in Europe. Fully justified the manager’s brave selection.

There was also admiration for Liverpool’s defensive resilience as they largely controlled the threat Dortmund posed.

Bascombe focussed on the partnership of Lovren and Sakho in particular:

Liverpool went into this game with an unbeaten record in the Europa League, and their often maligned centre-backs Mamadou Sakho and Dejan Lovren deserve much of the credit for this.

The French defender threw his body in the way of multiple attempts on goal, and his reading of the game in defence was a source of frustration for Dortmund’s attackers.

Dejan Lovren and Mamadou Sakho embodied the Liverpool approach to the game, growing in confidence as it went on and finally holding strong when the pressure was on.

Centre-backs Mamadou Sakho and Dejan Lovren have had their critics but both put their bodies on the line for everything.

Paul Doyle for the Guardian centred on Sakho’s superb defensive performance, which he felt proved the Frenchman is a better defender than Hummels:

Hummels’ subsequent headed equaliser does not change the fact that Mamadou Sakho, though not above the odd error himself, is a far better defender.

After a thrilling first leg, reporters looked ahead to what promises to be a special second tie at Anfield.

Hunter feels Liverpool have “little to fear” next week:

Otherwise, despite all the pre-match talk of Dortmund’s developed style and cutting edge, Liverpool exited knowing they have little to fear from their quarter-final opponents.

Rather more than just alive in the Europa, Klopp’s team approach Thursday’s second leg of this quarter-final with a spring in their step and the belief that an intense European night at Anfield might blow them all the way into the last four of the competition.

It promises to be some occasion at Anfield next Thursday night and Liverpool will go into it knowing they are more than capable of finishing the job off and marching into the last four.