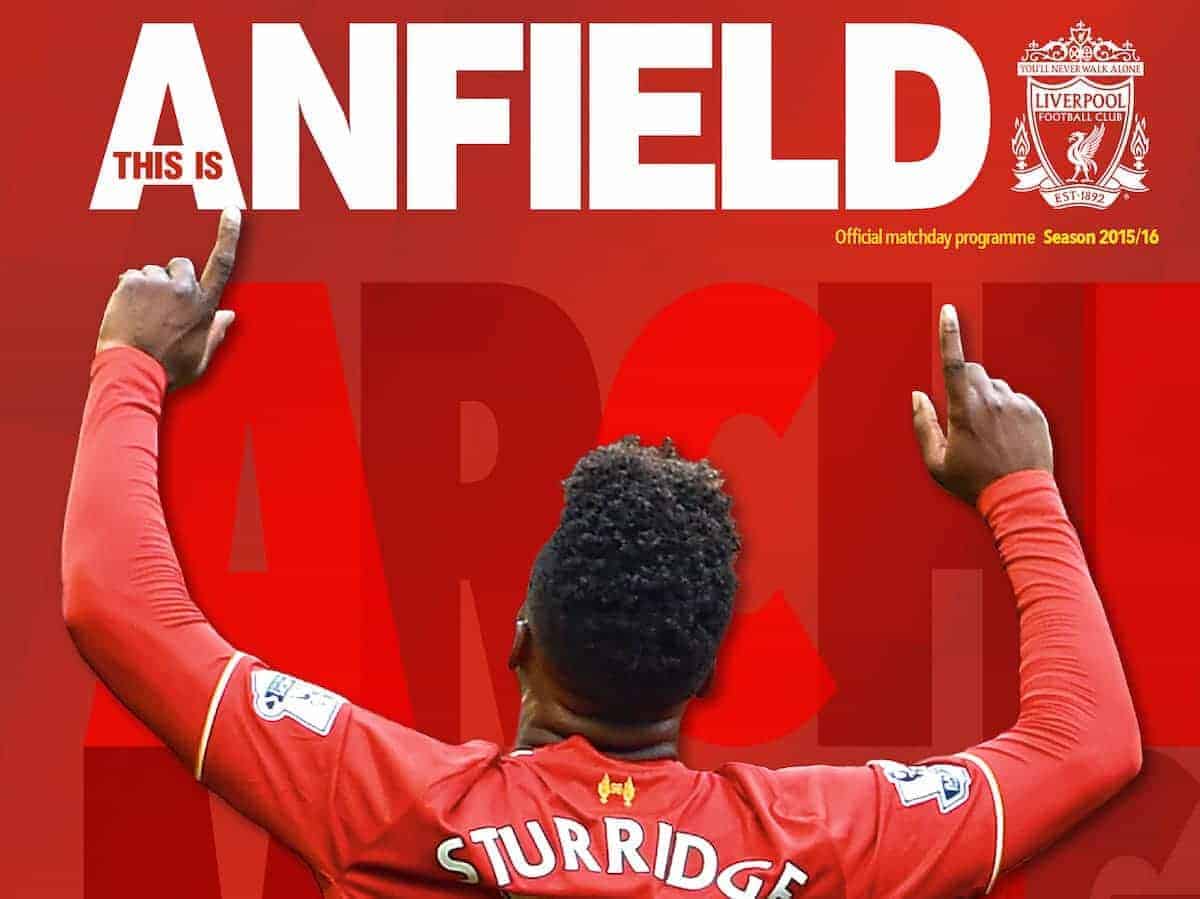 After a month without a home league match, Liverpool return to domestic action at Anfield against Spurs on Saturday. Here’s Chris’ Kop magazine style preview.

When you think of bad records associated with Tottenham Hotspur then the words ‘Chas’ and ‘Dave’ immediately spring to mind. That is until you remember ‘Glenn and Chris’ – aka Hoddle and Waddle – recorded Diamond Lights in 1987. I’m not saying it was bad, but it made Hoddle the only player in English football who could make a ball curl with his feet and your toes curl with his voice.
If you’ve never heard it, check it out on YouTube although maybe wait until you’re alone and clear your browsing history afterwards, just in case.

Yet even though Spurs had players more likely to appear on Top of the Pops than be top of the league there is, somewhat amazingly, a worse record associated with Tottenham. And it doesn’t belong to Jacques Santini.

Bill Shankly led Liverpool back to the top-flight in 1962 and since then the Redmen have faced Spurs 51 times (they spent 1977/78 in the Second Division) in league games at Anfield. They’ve only won four of them, in 1985 (Garth Crooks), 1986 (Clive Allen), 1993 (Teddy Sheringham) and 2012 (Rafa van der Vaart and Luka Modric). The most recent of those victories even had mitigating circumstances in Spurs’ favour – we had Gulacsi, Kyrgiakos, Robinson, Cole, Poulsen, Shelvey and Ngog on the bench. Worst. Seven. A. Side. Team. Ever.

To put Spurs’ awful Anfield record into further context, the Reds have won 17 times at White Hart Lane in the same period, seven of those victories coming since football was invented in 1992. History, therefore, suggests that Spurs are less likely to win at Anfield on Saturday than New Look are to sponsor the new Main Stand (see what I’ve done there?), but the present tells a very different story.

I’ve never seen Spurs still challenging for a league title in April before, but then I’m only 38. I’ve also not seen Liverpool win two consecutive Premier League games at Anfield since May 2015. I’m not sure which is the more ridiculous.

For Liverpool to be entering April having not won back-to-back league games all season is a clear reflection of what a poor campaign this has been. I’ve got every faith that things will improve significantly under Jürgen Klopp when he gets his own players in (Gotze for £20m would be a rather more exciting prospect than Markovic for £20m was, don’t you think?) but in the meantime I’d like to see some consistency from his current team, especially at Anfield. Not that I’m convinced we’ll get it.

Our home league form reads as follows under Klopp: 1-1, 1-2, 1-0, 2-2, 1-0, 3-3, 0-1, 2-2, 3-0. That’s 13 points from a possible 27 and a set of results that bear the hallmarks of an erratic side that are also equally unpredictable on the road. This season’s crazy fixture schedule – I now declare the Auto Cup Scheme as a financial dependent on application form having spent so much on it – has made it a lot harder for Klopp to field a consistent team that gets consistent results, but then perhaps his style of management, and the situation he inherited, was never going to lead to consistency and stability straight away.

Klopp has used 35 different players so far as Liverpool boss. Three more have been unused substitutes. Danny Ings and Joe Gomez would undoubtedly have been given games too had they been fit and, as soon as the top four is no longer achievable, I wouldn’t be surprised if Danny Ward is given an opportunity ahead of the Euros.

He’s also given eight different players the captain’s armband to set a new club record of nine different skippers (Mamadou Sakho also wore it in Bordeaux under Brendan Rodgers) in the same season (the previous record was six in 2010/11).

That is partly down to injuries and the weakened FA Cup line-ups he fielded, but it also suggests that Klopp is using the captaincy to test how certain players respond given added responsibility, such as Jon Flanagan at Southampton.

Add to that the different central defensive partnerships he’s tried, the use of attacking players like Coutinho and Firmino in a variety of positions plus regular different midfield combinations being utilised and, while Klopp is obviously attempting to win games, there is also an element of him trying different things as he ascertains which players to keep this summer and who will be getting the Benteke. Sorry, boot.

Given we all know there is a lack of quality in certain areas of the team then it shouldn’t really be surprising that erratic displays and inconsistent results have continued to be the norm and I’m expecting more of the same between now and the end of the season, starting on Saturday.

The only realistic hope of Liverpool now qualifying for the 2016/17 Champions League is to win the Europa League although with the best side in the competition to face in the quarter-finals I’m not sure ‘realistic’ is the right word.

Klopp will no doubt plan for both legs against Borussia Dortmund by tinkering with the sides he fields against Spurs and Stoke, but he’ll also want to put the botched second half at St Mary’s behind him before his return to the Westfalenstadion in what will be our first home game of the season after an international break (our record is P3 W1 L1 L1 after internationals this year, if yer wondering).

But, to do so, Liverpool will have to win a second consecutive home league game for the first time under Klopp’s management against a Tottenham team that are facing a must-win game, their most important league match at Anfield since April 1963 when they arrived here in second place, one point behind leaders…Leicester City.

What happened next? Spurs led 2-0 at half-time only to lose 5-2 before beating the Reds 7-2 at White Hart Lane three days later before eventually finishing as runners-up to league winners Everton after Leicester capitulated and lost their last four.

And people say that this season has been crazy…

• Chris McLoughlin writes for the official This is Anfield matchday programme, on sale at the ground, in LFC club stores and from www.sportmediashop.com or you can purchase a digital edition by searching for ‘Liverpool FC Programmes’ in the App Store. Go ‘ead then!