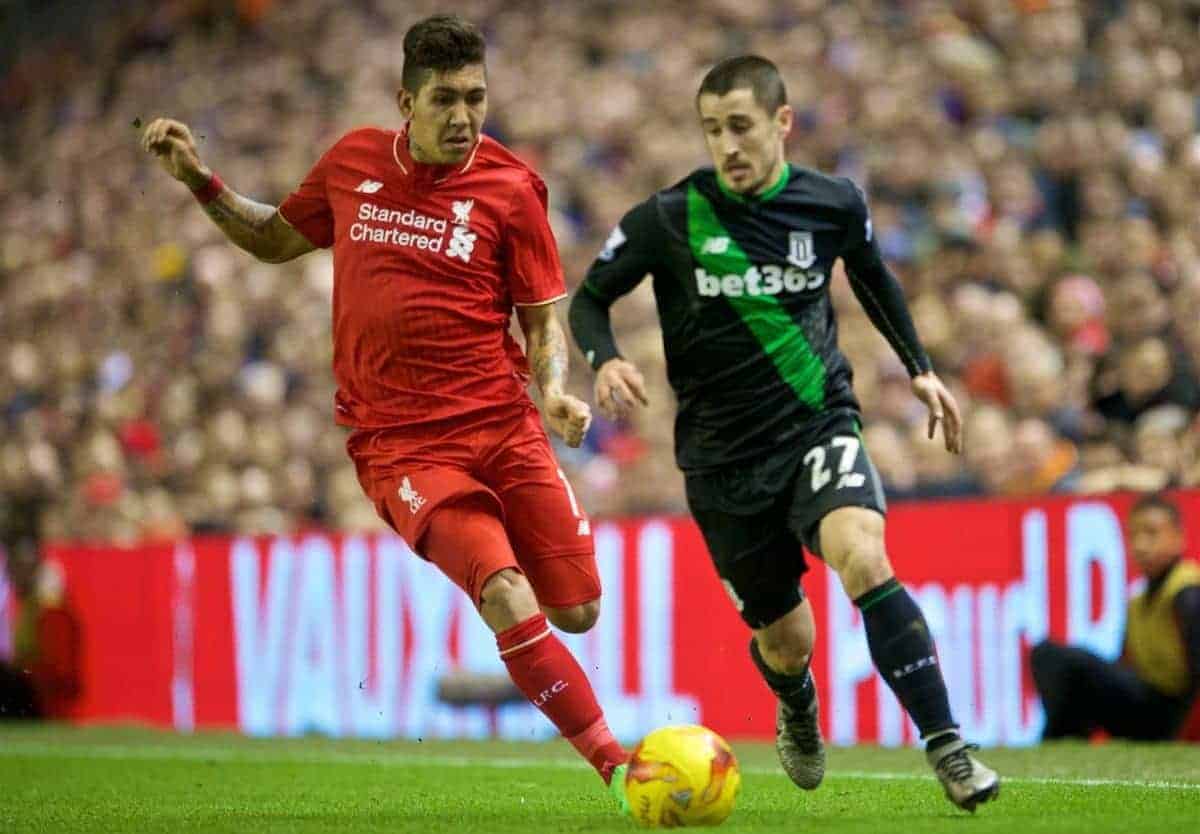 Liverpool welcome Stoke to Anfield on Sunday afternoon, as the Reds aim to improve on their current ninth-place position in the Premier League. Jurgen Klopp‘s side should be in buoyant mood for the visit of the Potters, following the excellent 1-1 draw against Borussia Dortmund on Thursday.

The Europa League quarter-final first-leg clash saw Liverpool perform admirably from start to finish, with next Thursday’s return fixture having the potential to be a classic.

Klopp has the tricky job of shuffling his pack for the Stoke game, but also not weakening his side too much against Mark Hughes’ potentially dangerous team.

Thursday-Sunday matches have been famously problematic in the past, and it could prove to be a tough afternoon on Merseyside.

Liverpool may only have won one of their last five matches in all competitions, but in truth, that clouds the fact that they have been playing well.

There have been three respectable draws in that time, against Man United, Tottenham and Dortmund, with the 3-2 defeat to Southampton the only genuinely disappointing result.

The Reds now look a completely different team under Klopp, and while there is still plenty to work on, the future looks bright.

Three points are much-needed in the league, however, with ninth-place simply not good enough currently. A strong end to the campaign is imperative.

Stoke’s season has nose-dived a little, after such a promising opening few months of the campaign, with a mid-table finish now likely.

At one stage, it genuinely looked as though a top-four finish could be on the cards, but key players have been injured and lost form, and legs appear to have tired as the weeks have gone by.

Hughes’ men have been very inconsistent in 2016, although they have only lost one of their last seven matches.

On their day, they are a difficult side to beat – they are also a real threat on the counter-attack – and Liverpool will do well to overcome a stubborn Stoke outfit.

Liverpool have got the better of Stoke in three separate matches already this season, and have proved to be a real thorn in their side.

Philippe Coutinho‘s dramatic late goal earned the Reds a 1-0 away win on the opening weekend of the season, before the two sides were pitted against each other in the League Cup semi-finals.

After Jordon Ibe’s goal inspired Klopp’s men to victory at the Britannia Stadium, Liverpool then overcome the Potters on penalties in the second-leg, following the visitors’ 1-0 win after extra-time.

The Reds’ last defeat to Stoke was one of the most depressing results in the club’s history, with Brendan Rodgers’ side annihilated 6-1 on the final day of last season.

In the corresponding fixture at Anfield last season, Liverpool were 1-0 winners, with Glen Johnson the unlikely hero with a late winner.

There was also a memorable 5-3 win for Rodgers’ side in January 2014, as the Reds started looking like genuine title contenders. Luis Suarez and Daniel Sturridge were among the goalscorers that day.

Jordan Henderson is definitely out of Sunday’s game, with the knee injury picked up against Dortmund threatening to end the skipper’s season.

That is likely to mean Joe Allen will come into the side, with the Welshman continuing to impress whenever he is given a chance by Klopp.

Roberto Firmino could start too, having recovered from a hamstring problem, while Lucas Leiva and Kevin Stewart also return to the fold.

It will be interesting to see how strong Klopp’s line-up is, given how much more important the second-leg against Dortmund is than Sunday’s match.

No side in the Premier League currently has more injuries to first-team players than Stoke, which has played a part in their season petering out a little.

Ryan Shawcross, Geoff Cameron, Glenn Whelan and Xherdan Shaqiri are all doubts for the meeting with Liverpool, with Whelan the least likely to be fit in time.

Jack Butland has been ruled out for the rest of 2015/16, having injured his ankle on England duty, while Jon Walters remains a long-term absentee.

Johnson could feature against his former club, but the 31-year-old is another Stoke player who will have to be assessed in the lead-up to the game.

Klopp spoke about Henderson’s injury, saying he hopes to have the 25-year-old back before the end of the campaign:

It (Henderson’s injury) is serious, but it’s not that serious that there’s no hope for us for maybe the last one or two games, and of course there’s hope for the European Championships.

So that’s not a final judgement or whatever that you can say, ‘No, there’s no chance’. There is a chance.”

We will do everything for him, for us, that he’s back in the race as soon as possible. That’s it, I can’t say more. We also have to wait for how each day and see how he does.

Ideally we would love six wins.How realistic that is we don’t really know, but we have the potential to do that.

It is a tough ask. We have tough games. But our intention is to try to win every one of them and see how far that takes us. We want to finish the season as strongly as we can.

Liverpool are the clear favourites to win on Sunday afternoon, with odds of 8/13 outlining their superiority over Stoke.

The draw is 16/5, while victory for the visitors is 5/1. Once the team news arrives on Sunday, those odds could be different, however.

Sturridge should return to the starting eleven, having been left out against Dortmund, and he is 15/4 to score first at Anfield.

Thursday’s goalscoring hero Divock Origi is 5/1 to open the scoring, and the same applies to the fit-again Firmino.

Joselu is 9/1 to stun the home fans and register the first goal, while Liverpool winning and both sides scoring is a tempting 13/5.

The match is not being televised in the UK, with Man United‘s trip to Spurs on instead. Live streams will no doubt be available as ever, though.