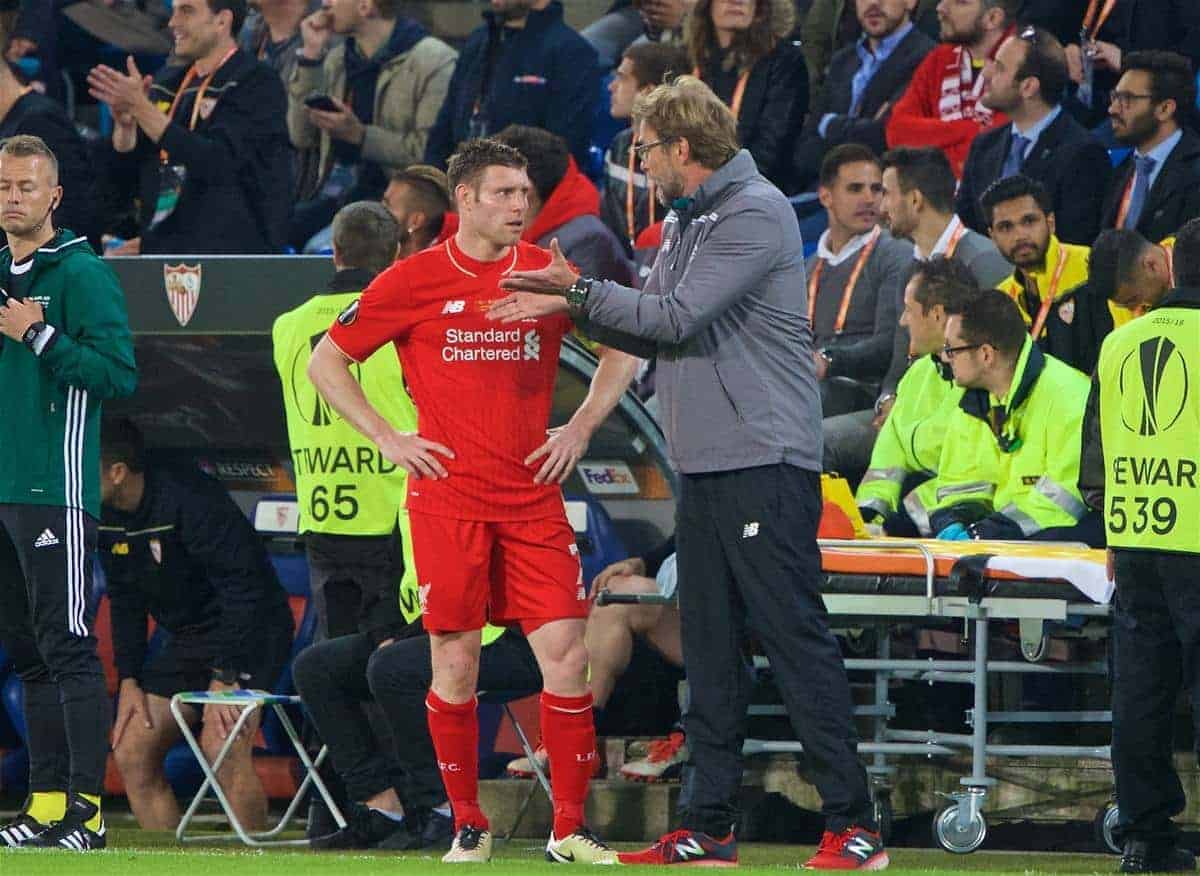 James Milner believes Liverpool will learn from their mistakes, following their Europa League final defeat to Sevilla on Wednesday.

The Reds wilted in their biggest game of the season at St. Jakob-Park, on what proved to be a deeply depressing evening for players and supporters alike.

Daniel Sturridge‘s fabulous goal gave Liverpool a half-time lead, but having conceded an equaliser within seconds of the restart, Jurgen Klopp‘s went on to lose 3-1 in resounding fashion.

It was a second defeat in a final in the space of three months – Man City defeated the Reds on penalties in the League Cup final in February – with yet more question marks about the mentality of this current squad.

Milner couldn’t hide his disappointment after the game, but says he hopes the players will learn from such a defeat.

“We’ve shown that character time and time again in this competition, but tonight we couldn’t do that,” Milner told BT Sport.

“That’s disappointing. When you leave yourselves too much to do one too many times, it’s pretty difficult to do it time and time again.

“It will take a long time to get over this but we have to regroup, take what belief we can and learn from what we can.

“We’ve been to two finals this year and not managed to get over the line, so we need to learn from that and make sure that next time we get there we finish the job.

“Everything we said at half-time were the right things, everyone was switched on but we didn’t show that.

“We gave a sloppy goal away in the first couple of seconds in the second half and we never really got back into the game from there.”

The 30-year-old bemoaned his side’s all-round performance in Basel, cursing the fact Liverpool didn’t find their top level at any point.

“We’ve shown throughout this competition that we’re good enough to win it, but we haven’t tonight on the night that it mattered most and that’s the most disappointing thing,” he added.

“It took us a while to get into the game. I thought once we got into the game we played pretty well – [we] got the goal obviously and I don’t think they caused us too many problems, just set-plays. Second half, we know we never started at all.

“It’s devastating losing the game, but I think the most disappointing thing is that we didn’t show [anywhere] near what we’re about. [We] didn’t play anywhere near our abilities and that’s probably the biggest thing for me.”

It was a hugely disappointing night for everyone associated with the club, and a long 2015/16 campaign has now finally come to an end.

A crucial summer in the transfer market awaits Klopp, as well as his first pre-season with the squad, and hopefully they will return a real force next season.