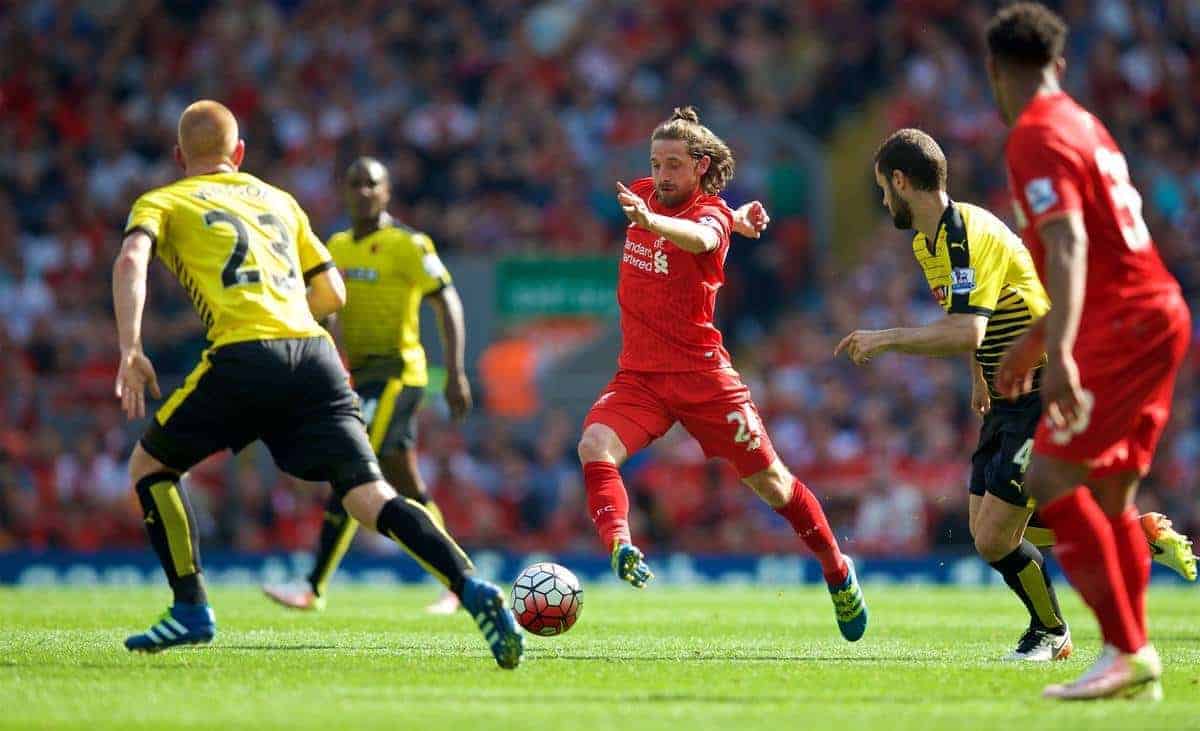 Liverpool midfielder Joe Allen admits he is playing for his place every time he takes to the field but a looming Europa League final does add a little extra incentive.

The Wales international has arguably been the best performer when Jurgen Klopp has selected a second-choice side and he was again in the 2-0 win over Watford, in which he scored the first goal.

There are two league matches left against Chelsea and West Brom before Liverpool face Sevilla in Basle and the Reds boss insists he does not yet know his line-up for the final.

That offers hope to the likes of Allen, who has done well when called upon and has probably been slightly unlucky not to get more of a run in Klopp’s first team.

Allen has just over a year left on his contract but all talks about an extension have been put on hold until at least the end of the season and the 26-year-old is just focusing on his job on the pitch.

“With the final looming we want to use every opportunity we get out there on the pitch to build momentum ahead of that game against Sevilla,” he said.

“To be honest any time you step out for this team you are playing to prove you should be involved in the next game, whatever that game is.

“Of course there is an added incentive in some ways when there’s a final coming up.

“My personal mindset is that when I cross that white line my focus is always on performing and helping the team to get the result, regardless of who we’re playing.

“Personally, I don’t struggle to motivate myself.” Klopp made eight changes for the visit of Watford and while the performance was a long way from their best, they were deserved winners.

Players like Daniel Sturridge, an unused substitute, Nathaniel Clyne, Dejan Lovren, James Milner, Emre Can and Adam Lallana all had a chance for a rest but the second-string proved they were up to the task.

There are likely to be more changes for Wednesday’s visit of Chelsea but for the final match of the season, just three days before the final, Klopp is likely to revert to fringe players again as he keeps players fresh for one of the most significant matches in years with a trophy and a place in the Champions League at stake.

“When I had the chance to join this club, the ambition was to win silverware,” added Allen.

“I’ve come close so far. Now there’s another opportunity to lift a trophy and it’s an opportunity I can’t wait for.

“Everyone connected with the club will give absolutely everything to try to ensure we bring that trophy home.”

Like some of his team-mates, Allen has Euro 2016 to look forward to also but he is putting all his energy into helping the club secure their first trophy for years – and that includes not worrying too much about his contract situation.

“The Euros is something that’s been there for lots of players to look forward to, I’m no different,” he said,

“It’s a great position to be in at the moment. There is so much to look forward to in terms of club football with the final coming up.

“And then once the end of the season comes, there’s the international football to follow.

“I can’t say there’s been any changes on the contract.

“The manager has said that between now and the end of the season it’s not the right time to talk about those things.

“I think that works out well for everyone.”