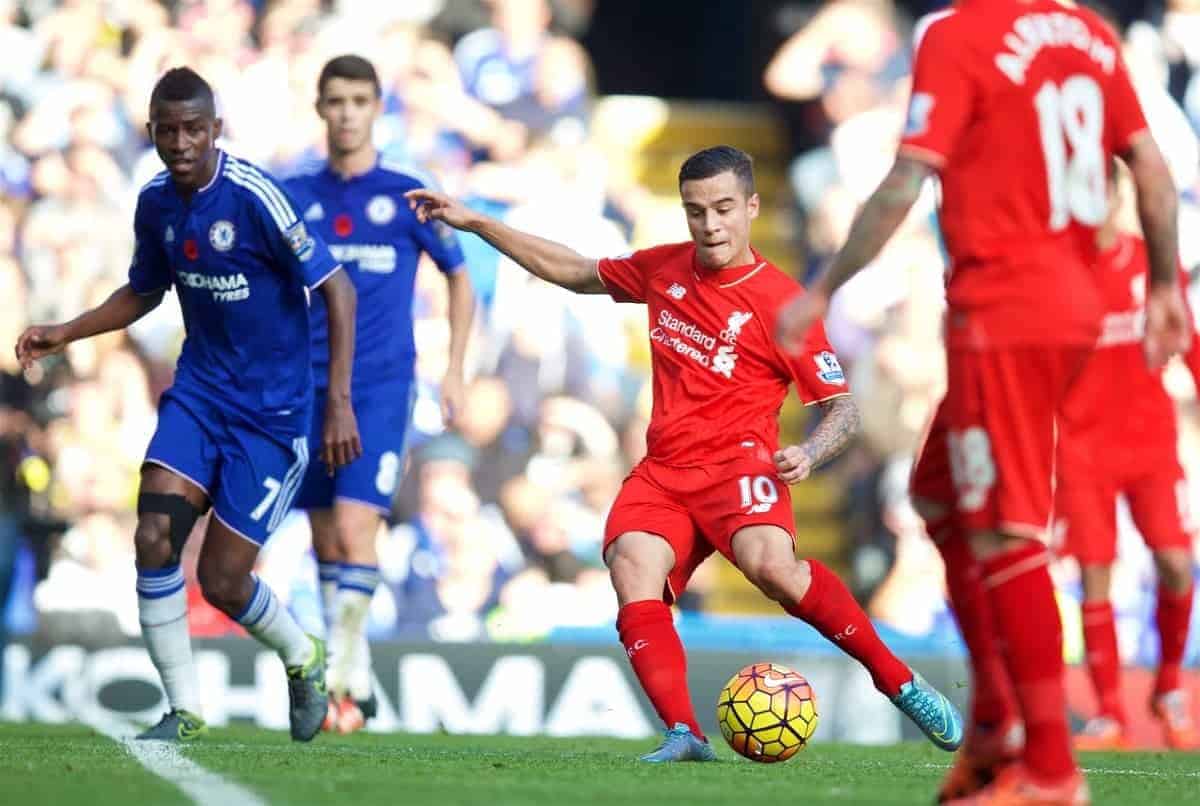 Liverpool welcome Chelsea to Anfield on Wednesday evening, as the Reds play their last home game of the 2015/16 season.

Liverpool enjoyed a comfortable 2-0 home victory over Watford on Sunday, with goals from Joe Allen and Roberto Firmino sealing all three points for Jurgen Klopp‘s side.

The Reds’ Premier League campaign has petered out a little, with Europa League commitments becoming very much the priority, but a strong conclusion is still much-needed.

The visit of Chelsea is always a potentially spicy affair, given the animosity between the two clubs in recent times, and Liverpool will be desperate to sign off at Anfield for another year in style.

With their Europa League final against Sevilla now just a week away, there are still possible places up for grabs in the starting lineup, and Wednesday could provide a perfect opportunity for players to stake a claim. Liverpool now look a completely different team to the one that Klopp inherited back in October.

Confidence is high following a memorable European run, and the quality of football and improved consistency are there for all to see.

Following consecutive defeats to Villarreal and Swansea City – one was unlucky, the other was with a weakened team – the Reds have won their last two matches, in the second leg at home to Villarreal and against Watford.

Three more victories to end the season would be the perfect way to bow out – it would also mean Europa League glory – ahead of what should be an exciting summer at the club.

Jose Mourinho was sacked by December, with his team looking a shadow of their former selves, and despite Guus Hiddink steadying the ship somewhat, the Blues are still ninth in the table.

Chelsea‘s highest point of the season appears to be ending Tottenham Hotspur’s title chances last week, which pretty much sums up how things have gone for them since August.

The west Londoners have managed just one win in their last five matches – a 4-1 victory away to Bournemouth – and they have only tasted victory twice in 10 games.

Aside from Brazilian winger Willian, not a single player has impressed consistently, and Wednesday should represent a great chance for Liverpool to pick up all three points at Anfield. The Reds won 3-1 in thrilling fashion at Stamford Bridge in October, as Klopp started to work his magic just weeks after taking charge.

Ramires may have given Chelsea an early lead, but Philippe Coutinho‘s double and a late clincher from Christian Benteke sealed a brilliant win.

That was the Reds’ only victory over the Blues in their last nine attempts, though, and it is a fixture that has often caused much misery for the Merseysiders.

Then, of course, there was the infamous 2-0 defeat a year earlier, when Chelsea ruined Liverpool’s title hopes in depressing fashion. Apologies for reminding you about that.

Wins over the Blues have been hard to come by in the last five years, but hopefully the 3-1 victory will represent the start of a dominant period for the Reds against one of their biggest adversaries.

Having suffered so badly with injuries during the early months of his reign, Klopp now has virtually a fully fit squad to choose from.

The 48-year-old has also managed to rest key players for the recent Premier League games against Newcastle United, Swansea and Watford, which has been a bonus.

It may be that the Liverpool boss brings back the likes of Can, Firmino and Daniel Sturridge for the visit of Chelsea, before leaving them out for Sunday’s Premier League finale with West Bromwich Albion.

That game falls just three days before the game against Sevilla, so it would be an enormous surprise if any starters for the final began proceedings at the Hawthorns.

Danny Ward, Jordan Henderson, Divock Origi, Danny Ings and Joe Gomez all remain sidelined, but they are increasingly close to a return. Henderson may even be fit for the final on 18th May.

Pedro could miss Wednesday’s game for Chelsea, having picked up a knock against Spurs last week, while Loic Remy is unavailable. Kurt Zouma remains a long-term absentee.

John Terry is out through suspension, following his sending off against Sunderland on Saturday, which means the captain has played his last game for the club.

It is a disappointing way for the 35-year-old to finish such an impressive Chelsea career, but not many inside Anfield on Wednesday will care about that.

The away fans are planning a protest after 26 minutes – Terry’s shirt number – such is their annoyance at the Englishman not being given a new contract.

Addressing reporters on Tuesday afternoon, Klopp stressed the importance of a win over the Blues in order to keep up momentum:

“What I’d prefer is Thursday next week, we’ve won against Chelsea and West Brom, and we’re back to Liverpool with the cup.

“I like this all or nothing [situation], but only because of the opportunity to get all.

“If we lose the two next games, I will go to Basel still confident, still thinking we can win. But it’d feel better to win.”

While Hiddink praised Liverpool as a “skilful” and “strong” side, paying respect to Klopp’s work over the past seven months:

“It’s a very energetic team which Klopp has formed.

“They can be very resilient; they were down against Dortmund and made it up in the last second.

“They have a skilful team but also a strong team.”

Liverpool are the favourites to win on Wednesday evening, which is no great surprise, even if they are slightly weakened.

Both teams to score is 8/15, which is likely when you consider the match is likely to have an open, end-of-season feel to it.

Benteke is 9/2 to be the first goalscorer, and it may be that he once again starts. The 25-year-old did pretty well against Watford, and a goal on what is sure to be his last match for the Reds at Anfield would be most welcome.

Firmino has been in good form in front of goal in 2016, after a slow start to life on Merseyside, and he is 53/10 to score first on Wednesday.

Costa has often made himself a pest against Liverpool, and the fiery Spain international is 11/2 to silence Anfield with the first goal.

Eden Hazard showed signs of returning to form against Spurs, scoring a wonderful goal, and backing him to score during the game, at 31/10, may be worth a punt.

The match is live on Sky Sports 2 from 7:55pm (BST), with kick-off at 8pm. As ever, This is Anfield will bring you live coverage on the night.