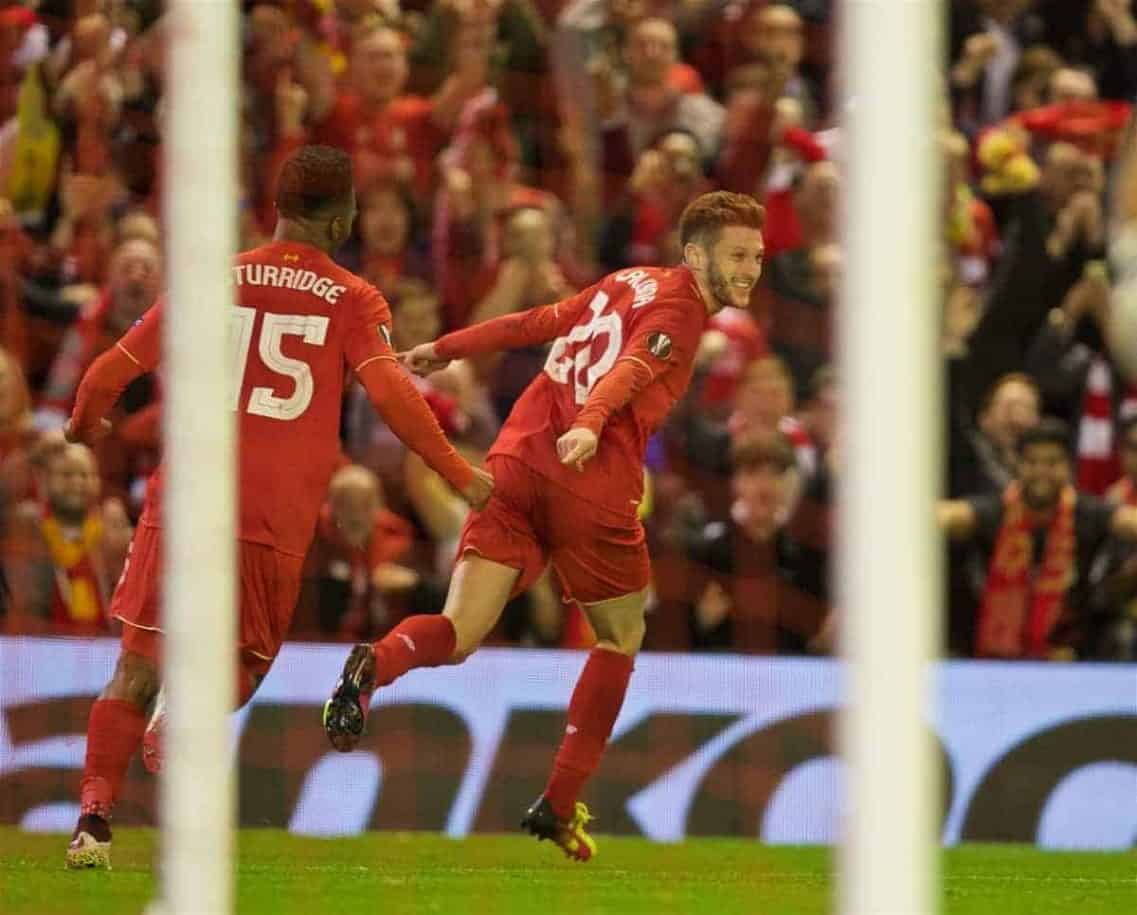 Following Liverpool’s emphatic 3-0 win against Villarreal on Thursday evening, we bring you the best social media reaction from the game.

The Reds produced a fantastic performance in what was their biggest game of the season so far, in front of an electrifying Anfield.

Bruno’s early goal was the perfect start for Jurgen Klopp‘s side, and their relentless football simply blew Villarreal away.

Daniel Sturridge made it 2-0 with a huge goal midway through the second-half, and Adam Lallana put the icing on the cake late in the day.

Liverpool are into their first European final since 2007, and they will face Sevilla in Basel in a fortnight. It promises to be a memorable occasion.

There were incredible scenes in the lead-up to kick-off, bringing back memories of Borussia Dortmund’s visit to Anfield last month:

Bruno’s early own goal was met with great delight, as well the general noise inside Anfield:

No wonder Emre made himself fit, who wouldn’t want to play in this atmosphere. Incredible.

Fans gave their thoughts on an excellent first-half performance, with Emre Can earning plenty of praise:

This has been a fantastic first-half from #LFC. Relentless stuff. Must just be wary of the counter-attack sucker-punch.

I love Emre Can more than any of you lot do.

Emre Can, literally, running midfield on his own. What a hero.

Great intensity in the first half – just need to add a little bit more quality on the ball and we can do this. #LFC.

Excellent first half from Liverpool. Away goal danger still exists but more of the same and the final beckons.

So *THAT* is what heavy metal football looks like! Brilliant half from #LFC.

Liverpool were equally brilliant after the break, as Klopp’s men cruised to a wonderful victory. Supporters were joyous at the final whistle:

After no great European nights at Anfield since 2009, three in two months. Liverpool were terrific.

Before Jürgen Klopp took over, #LFC seemed like they'd struggle to get out the group. They topped it and are heading to Basel. Unreal!

What a night! Superb performance from Liverpool. Dominated from the off and showed great game intelligence. Lovren and Can outstanding.

That was Jurgen Klopp football. Fantastic performance when the stakes were high.

#LFC digest: Liverpool painfully efficient, every man better than his opposite number. A Klopp masterpiece without question. Big task ahead.

Never in doubt. A few half chances for Villareal, but from the kickoff to the final whistle, we were the better team. Kloppo warned them that they wouldn’t know what hit them at Anfield.

Man U, Dortmund, Villarreal. That's quite a run to the final.

Liverpool in another Cup Final toughest possible final but with this lot anything's possible pic.twitter.com/hq17bUt9Bi

It's also good to see the Villereal boss was spot on – his team not overawed by the occasion at all. #LFC.

Jurgen Klopp has led #LFC into two finals in his first season in charge. What an amazing manager he is. Can't believe he's ours!

Nilf on the forum:

Another incredible European night for #LFC. Villarreal blown away by the power of Anfield https://t.co/5Zca2T84UP pic.twitter.com/Z4utVjyGAh

That Sion draw seems a long, long time ago… a new era at Anfield.

Klopp stood in the centre-circle after the final whistle, punching the air as Anfield responded wildly. They love this charismatic man. #lfc

Sweeting on the forum:

Emre Can is a monster. Basically played CM on his own and was completely dominant. What a talent.

Another one bites the dust. #LFC pic.twitter.com/vEwuOl02Qg

Surprised I haven't seen anyone criticising Sturridge for over celebrating….

13 days until we lift the UEFA cup for the 4h time.

Have Sky given up on comparing Klopp's win % with Rodgers' yet? #2cupfinals #thekloppeffect