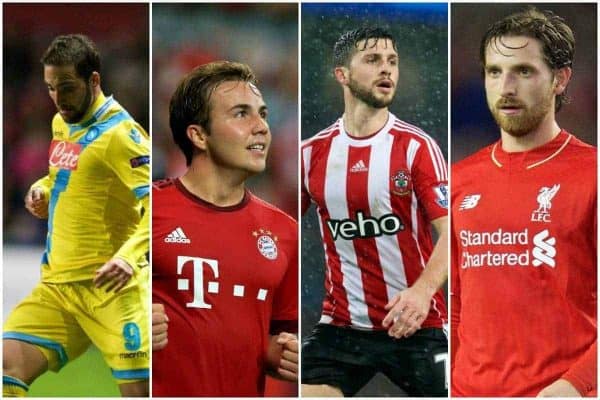 Capping a busy bank holiday weekend for Jurgen Klopp and his staff, we round up the latest Liverpool transfer news.

The past week saw the Reds reportedly look to push through with moves for Ben Chilwell, Mahmoud Dahoud, Reece Oxford, Sadio Mane and Piotr Zielinski, while the likes of Mario Balotelli, Samed Yesil and Martin Skrtel moved closer to the Anfield exit.

Klopp is poised for plenty of business in the summer transfer market, and this continued over the weekend, with a number of incomings and outgoings mooted.

Here’s the latest Liverpool transfer news, including a possible move for Gonzalo Higuain.

Whether Liverpool need to sign another striker this summer is up for debate, with Daniel Sturridge, Divock Origi, Danny Ings and Roberto Firmino set to make up Klopp’s forward options for 2016/17.

Christian Benteke is likely to leave the club, with West Ham United among those linked with a move for the Belgian, and if so, the Mirror suggest Higuain would be interested in arriving as his replacement.

The 28-year-old is believed to be pushing for a move away from Napoli, having broken Serie A’s all-time goalscoring record for a single season last time out, scoring 36 goals in 35 games.

Higuain is said to be interested in joining the Reds, and particularly working under Klopp on Merseyside.

Turning 29 later this year, Higuain would represent a departure from Klopp’s youth-orientated recruitment drive, but would certainly add quality to the German’s attacking ranks.

Liverpool’s pursuit of Bayern Munich attacker Mario Gotze has been much-publicised this summer, and while the 23-year-old moved to commit his future to the Bundesliga side earlier in May, this is likely to continue as the transfer window approaches.

But speaking to FourFourTwo on Sunday, Gotze insisted that he was focussing on the upcoming European Championship—where he is set to star for Joachim Low’s Germany.

“I think enough was written and done,” he said, responding to widespread speculation.

Gotze’s commitment has been mooted as a strategy to avoid further reports during what is a crucial tournament for the ex-Borussia Dortmund star, but whether he can avoid the spotlight seems unlikely.

Last weekend, Liverpool, Leicester City and Tottenham Hotspur were reported to be lining up bids for Southampton striker Shane Long.

The Republic of Ireland international enjoyed a strong campaign with the Saints in 2015/16, scoring 13 goals in 34 games—his most-prolific season’s outlay.

But while the Reds’ interest may be valid, this form has seen Southampton move to secure Long to an extended deal, according to the Mirror.

This could see Long follow Fraser Forster, Virgil van Dijk and James Ward-Prowse in signing a new deal with Southampton, as the club look to hold onto their prized assets ahead of a European campaign in 2016/17.

Liverpool’s more likely target seems to be Long’s attacking colleague, Mane, who was linked with a £25 million move to Merseyside on Thursday night.

Allen Would Cost “Too Much” For Celtic

Brendan Rodgers’ appointment as Celtic manager saw the Scottish Premier League side predictably linked with a host of his former players, including both Steven Gerrard and Joe Allen.

Signing Allen in a £15 million deal in 2012, shortly after arriving as Reds manager, Rodgers lauded the midfielder as his protege, unhelpfully labelling him as the “Welsh Xavi.”

But if Rodgers was looking to seal a reunion with his former midfield maestro at Celtic Park, he is likely to be priced out of a move.

That is according to Allen’s agent, Glenn Corcoran, who told the Scottish Daily Record that the Welshman would cost “too much” for Celtic.

“If Liverpool were willing to sell—and that is a big ‘if’ because I’ve not had that conversation with the club—they would ask for too much money for him,” Corcoran said.

“I don’t know if Celtic at this moment would be willing to spend that sort of money and the wages would also be a massive issue.”