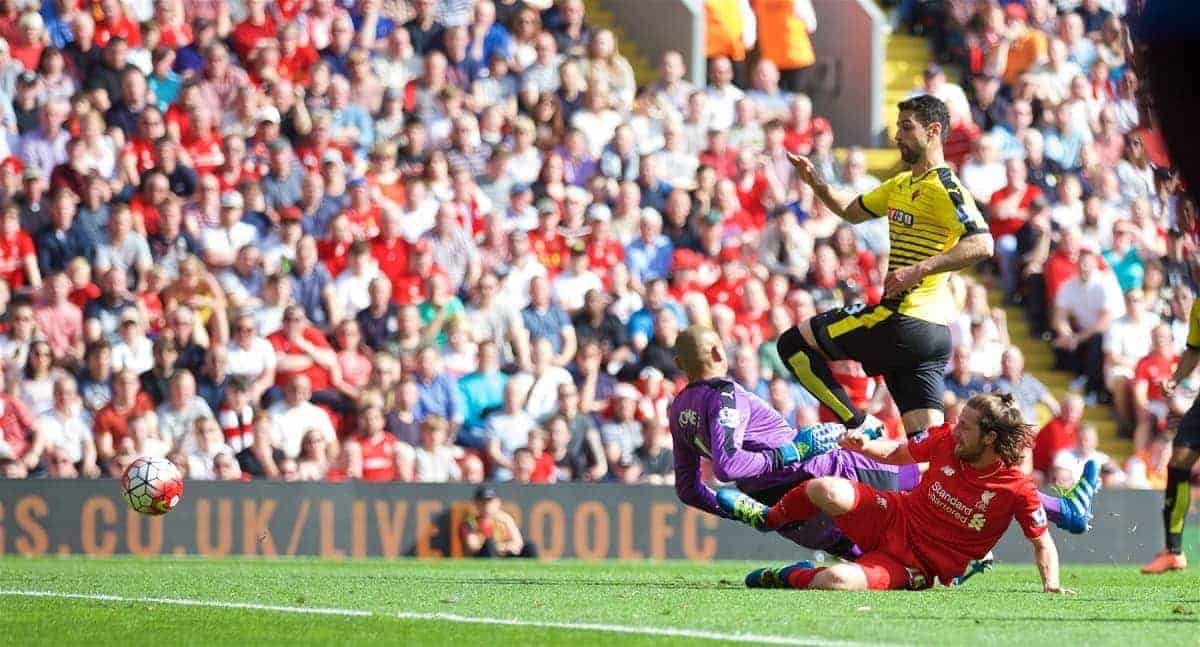 Liverpool beat Watford 2-0 in the Premier League on Sunday, with a goal in either half from Joe Allen and Roberto Firmino inspiring the Reds to all three points.

Jurgen Klopp unsurprisingly made numerous changes to the side that beat Villarreal 3-0 on Thursday, with the 48-year-old making eight alterations in total.

Simon Mignolet, Alberto Moreno and Philippe Coutinho were the only players to retain their place in the team, on a baking hot afternoon at Anfield.

Jon Flanagan came in for Nathaniel Clyne at right-back, Martin Skrtel and Lucas Leiva were partnered together at centre-back and Christian Benteke started up front.

It was a slow start to the game, with Liverpool enjoying plenty of possession but not doing too much with it. Moreno made a good challenge to deny Odion Ighalo.

The Watford striker then fired an ambitious effort over, and Almen Abdi also shot into the Kop. The visitors were visibly growing in confidence.

Coutinho’s deflected shot flew wide of Heurelho Gomes’ goal, as the match started to come to life. Moreno drilled an effort over.

Ikechi Anya missed the target after a swift counter-attack from the Hornets, as the visitors continued to threaten in the opening half an hour.

Skrtel made a crucial block to keep out Abdi’s goal-bound volley, and the Reds were ahead shortly after.

Allen got on the end of Benteke’s clever knock-down, before finishing bravely past Gomes to score his second Premier League goal this season.

It was another good moment for the Welshman, whose form in 2016 has arguably been as good as any other Liverpool player.

Ighalo missed a glorious chance to equalise almost immediately, with the Nigerian failing to head home with the goal gaping.

Allen’s goal was the difference at the break.

Coutinho had a wonderful chance to double the lead shortly after the restart, but he miscued his close-range effort. The Brazilian and Benteke were linking up nicely in attack.

Mignolet produced a fantastic save to deny Ighalo, as Quique Sanchez Flores’ side continued to show no sign of going away.

Firmino replaced Coutinho in the 61st minute, with the forward looking to continue his good run of goalscoring form.

Watford were really beginning to play well as the half progressed, and there was a spell when the Reds could barely get out of their own half.

Liverpool’s lead was doubled with 15 minutes remaining, however, with Firmino firing home in front of the Kop. Gomes did not cover himself in glory, though.

Klopp’s men saw out the rest of the game with relative ease, with Benteke and Ibe almost adding a third, as the Reds kept their top-six hopes alive.

Up next: The Reds host Chelsea on Wednesday evening (8pm BST), before visiting West Brom in their final Premier League match of the season next Sunday (3pm).