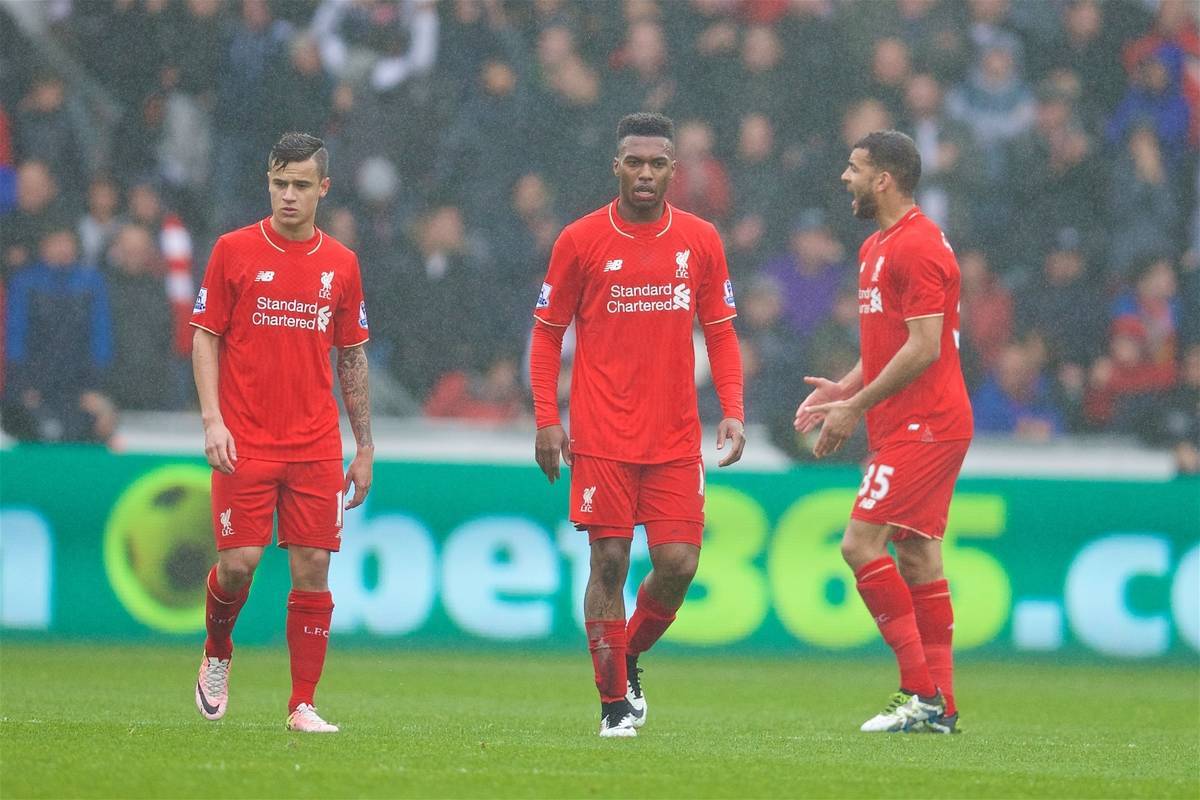 A much-changed Reds side lost 3-1 against Swansea City on Sunday afternoon at the Liberty Stadium, in a game that provided a mix of talking points.

But Ayew restored the two-goal cushion to keep the points in Wales on a disappointing afternoon for Klopp’s Reds, and here are five talking points from the game.

It was a day that lacked any kind of positives for the Reds, but Danny Ward was certainly one.

The Wales international came in for just his second Liverpool start in place of Simon Mignolet, and he produced another promising display between the sticks, despite conceding three.

With a disjointed defensive setup ahead of him doing little to repel the home side’s numerous chances, Ward pulled off a number of fine saves – excellent stops from Gylfi Sugurdsson and Jefferson Montero in particular – which sadly counted for little other than keeping the score down.

Despite the chaos unfolding in front of him, the young ‘keeper kept his composure, and though he perhaps could have done better with Ayew’s first goal, overall he provided a bright moment in an otherwise miserable display.

It was a horrible afternoon in almost every aspect for the Reds, but it’s one that will at least provide a learning curve for the youngsters involved.

Though impressive when selected alongside first-choice picks and shining on their own in cup competition, without first-teamers to rely upon in Swansea the youth experienced the harsh realities of top-level football.

Their hesitancy and lack of belief was ruthlessly exploited in all departments, with the midfield of Kevin Stewart and Pedro Chirivella lasting only 45 minutes as they were overawed and overrun.

Meanwhile in defence, Brad Smith endured a torrid day against experienced campaigner Wayne Routledge, culminating in his sending off.

Jordon Ibe failed to impress once again, while Sheyi Ojo struggled to impose himself on proceedings – despite assisting Benteke’s goal – as the youngsters were hampered with responsibility.

It provided a rude awakening for the academy players, who were shown how much work they still have to do to reach top level, but they will certainly be better off for the harsh experience.

Prior to the Wales trip, Klopp talked up the strength of his squad as he planned mass changes ahead of the Villarreal second leg.

The Liverpool boss alluded to the current perception of the Reds as “big club, not so good squad” before stating “this squad is much better than everyone thinks” – showing his faith in not only the team but the group as a collective.

But the disappointing defeat shows Klopp’s faith is misplaced, with the senior squad members at his disposal currently not good enough and the squad overall, oppositely to his belief, lacking the quality to be able to make changes and still compete.

Martin Skrtel in particular showed why he must be allowed to leave Anfield this summer, with another woeful showing alongside Lovren, while Lucas Leiva‘s role in the calamitous third goal is something that no longer needs to be seen.

Though injuries don’t help the current squad situation – forcing Klopp to play six academy players – youngsters need better senior reserves in key areas of the team, which Liverpool currently don’t have and which must be addressed.

Klopp Right to Rotate Despite Result

While most would agree changes were required for the clash, some felt wholesale switches should be avoided with a win needed ahead of Thursday’s crunch tie.

A much-changed side certainly contributed to defeat with the disjointed display that ensued, but despite the result, Klopp was right to make the eight alterations he did – which would likely have been nine had Connor Randall not suffered illness.

Resting the vast majority of those who played and will start on Thursday night was of unrivalled importance, and with the Europa League of undoubted priority, Klopp was right to make the adjustments he did.

It’s a case of short-term pain to give the best chance of long-term gain, and Klopp now has a number of key men who will now be fresh to go all out against the Spaniards at Anfield.

If the plan unfolds how the Liverpool boss hopes, those frustrated by Sunday’s selection are sure to forget a meaningless 3-1 loss to the Swans if the Reds do indeed reach the Basel final in May.

Sturridge Sloppy but Should Start vs. Villarreal

It was a poor day for the collective and individuals alike at the Liberty Stadium, with Daniel Sturridge one of those who turned in an abject display when more was needed in a youthful side.

The striker has been in great from recently, but visibly frustrated by a lack of service on the day, struggled to impose himself on the game – despite showing flashes of brilliance with his chipped effort first half.

A sluggish performance was capped off with him storming straight down the tunnel at the final whistle without acknowledging the away support, but despite a quiet outing, completing the full 90 as Klopp revealed he asked to, gets some much-needed minutes in his legs ahead of Thursday.

And Sturridge should certainly start against Villarreal with Liverpool needing to score on the night and him still by far the most likely source of hitting the net in the biggest game of the season.

Back in a full-strength Reds side, he could be the man to fire the Reds to within one game of European glory.