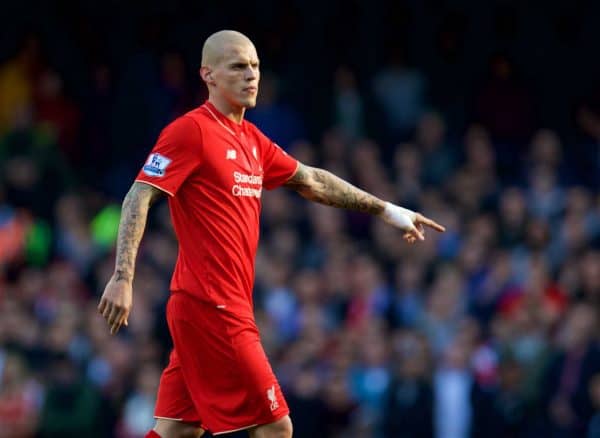 Martin Skrtel captains Slovakia to victory over Russia at Euro 2016

Liverpool defender Martin Skrtel captained Slovakia to a first ever win at the Euros with a 2-1 victory against Russia, producing an improved individual display at the heart of defence.

The second group game for Skrtel’s Slovakia against the Russians was a vitally important one, having lost 2-1 to Wales in their opening fixture of the competition.

Coach Jan Kozak made one change to the XI that lost to Chris Coleman’s men, and his decision paid off, as his side recorded a crucial win in Lille against the surprisingly unchanged Russians.

Winger Vladimir Weiss opened the scoring after 32 minutes with a cool finish, and Marek Hamsik added a superb second, firing in off the post from a tight angle to give Slovakia a two-goal lead at half-time.

A bullet header from Russia’s Denis Glushakov 10 minutes from time in the second period halved the deficit to set up a grand slam finish.

But Skrtel’s men held on with some brave backs-to-the-wall defending to claim a priceless three points that moves them to second place in Group B.

After a dreadful opening performance against Wales, Skrtel was much more composed at the heart of defence against the Russians, who posed an increased threat to that against England but were still limited overall.

The Liverpool defender had a limited defensive role in the back-line, focussed solely on clearing his lines and competing in the physical battle against giant striker Artem Dzyuba, which the 31-year-old did well.

Skrtel played a part in his side’s opening goal of the game, turning swiftly and passing inside to Hamsik – rather than back to his goalkeeper – with the Napoli midfielder then delivering a fine ball over the top which Weiss finished.

There were trademark rash moments in the second half though, Skrtel going to ground unnecessarily with no sign of danger and conceding a needless free kick in the dying seconds, but overall it was an improved display from the defender.

Linked with a move to Besiktas, Wolfsburg and an unnamed Chinese club according to his agent, Skrtel will have done his price tag no harm with this display, which is in contrast to his previous outing when he struggled against Wales.

Skrtel now prepares to lead his side into a vital final group game against several of his Liverpool teammates, when Slovakia face England on Monday.