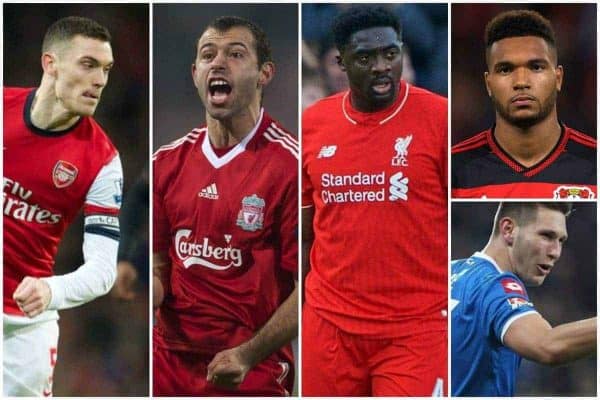 With Jurgen Klopp facing an injury crisis in his centre-back ranks this summer, Liverpool will need to seek reinforcements.

Klopp was dealt a double blow in the second week of pre-season as both Mamadou Sakho and Joe Gomez were revealed to be struggling with Achilles injuries.

The best-case scenario for the centre-back duo will be missing much of pre-season, but it is likely that they could be left on the sidelines for the Reds’ Premier League opener away to Arsenal on August 13.

This leaves just Joel Matip and Dejan Lovren as regular options at the heart of the defence, following Martin Skrtel’s £5.5 million move to Fenerbahce, with both Tiago Ilori and Andre Wisdom set to leave the club ahead of the 2016/17 season.

As a result, Klopp is believed to be targeting a new centre-back in the summer transfer window, with the 49-year-old favouring an experienced option, likely from the Bundesliga.

Here are five centre-backs Liverpool should target this summer, to provide much-needed cover.

Though far from the experienced option Klopp is likely to target, Hoffenheim star Niklas Sule is the perfect mould of centre-back for the German if he is to look to the future.

Sule was linked with a move to Merseyside towards the end of the 2015/16 season, and the 20-year-old is said to have rejected an approach from the Reds already, but Klopp’s defensive predicament should spur a new bid.

Standing at 6’5″, Sule is built for Premier League football, and is excellent both in the air and on the ground, with a strong reading of the game and a composed approach in possession.

Sule is set to develop into a top-level centre-back in the future, and if Klopp can convince him to switch the Rhein-Neckar-Arena for Anfield this summer, he would be a great addition to his ranks for the long term.

Like Sule, Bayer Leverkusen defender Jonathan Tah would not address Klopp’s needs in terms of experience, but as with his young compatriot, he would be an ideal signing for years to come.

Tah has only spent one season with Leverkusen so far, having joined from Hamburger SV last summer, but he has quickly established himself as one of Germany’s best young defensive talents.

This has led to interest from both Liverpool and Chelsea, according to Bild.

Called up to replace Antonio Rudiger ahead of this summer’s European Championship, Tah failed to make a single appearance in France, but provided reliable backup for the likes of Jerome Boateng and Mats Hummels.

A supremely intelligent centre-back with a refined, ball-playing ability, 6’3″ behemoth Tah pairs his tactical nous with a physicality that sets him aside as one of Europe’s most high-potential talents—and if Liverpool have any chance of signing him, they should not think twice.

Former Arsenal centre-back Thomas Vermaelen emerged as a bemusing target for the Reds in April, with Klopp reported to have made a “first formal offer” for the Belgium international.

Having seen his career stall on making the move from north London to Barcelona in 2014, Vermaelen is likely to leave Catalonia this summer, and on paper he would be an excellent addition as cover for the likes of Sakho, Lovren and Matip.

Schooled at three progressive football clubs in Ajax, Arsenal and Barcelona, Vermaelen is a versatile, ball-playing centre-back who operates on the front foot, suiting Klopp’s system.

But Barcelona’s willingness to sell highlights a major pitfall in any deal to sign Vermaelen, with the 30-year-old struggling with injuries in recent seasons.

However, this could boost Liverpool’s chances of signing Vermaelen as a backup, and when called upon he would provide a solid, experienced option.

In Javier Mascherano’s final season with Liverpool in 2009/10, he was arguably the only truly world-class player in Rafa Benitez’s ranks, and this quality has not waned since his departure.

Mascherano left Merseyside for Barcelona shortly after Roy Hodgson’s arrival as manager, and has spent the past six seasons largely operating at centre-back, with his aggression, timing and reading of the game making him an ideal partner for Gerard Pique.

But with Barcelona moving to sign Samuel Umtiti from Lyon this summer, the 32-year-old could find his first-team prospects under threat, despite pledging his commitment to the club this summer.

Though the chances are incredibly slim, if Klopp was able to convince Mascherano to return to Merseyside, he would be acquiring a defender of the highest calibre.

His ability to shine in the holding role suggests he could take up a regular role alongside Emre Can in midfield, filling in when required at centre-back; serving up the ideal scenario.

While moves for Sule, Tah and Mascherano may prove unlikely as Klopp plots to reinforce his back line this summer, a ready-made solution presents itself in the recently departed Kolo Toure.

Klopp opted not to offer Toure a contract extension at the end of 2015/16, forcing the Ivorian to leave Liverpool after three seasons.

This could have been an oversight by Klopp, who saw Toure impress when taking Sakho’s place in the latter months of the season, with the Frenchman suspended following a UEFA anti-drug ruling.

Toure was Liverpool’s best player in their Europa League final defeat to Sevilla in May, for example, proving he hadn’t lost any of his defensive qualities despite his advancing years at 35.

The former Manchester City centre-back ticks all of the boxes in terms of Klopp’s defensive requirements ahead of 2016/17, and would require no adjustment period if he is to return.

Toure would likely jump at the chance of re-signing with Klopp’s Reds, and he would offer an invaluable option on the field, on the training ground and in the dressing room.