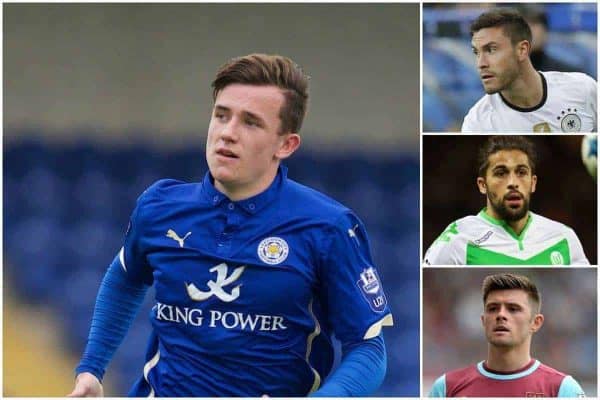 With Liverpool target Ben Chilwell set to sign a new contract at Leicester City, Jurgen Klopp needs to turn his attention to other left-backs.

Chilwell was long reported to be a favourite of Klopp’s, as he looked to provide competition for the divisive Alberto Moreno.

Reports suggest the teenager will extend his stay at Premier League champions Leicester, however, with a new deal close to fruition.

Furthermore, with Liverpool accepting a £6 million offer for Brad Smith from Bournemouth, Moreno could now be the only recognised left-back in the squad for 2016/17.

A new addition is badly needed, potentially to usurp Moreno as first choice, and here we look at five alternatives to Chilwell that Klopp could turn to.

With Aston Villa plying their trade in the Championship in 2016/17, it is unsurprising to see a number of their players linked with a return to the Premier League.

Liverpool have been linked with young left-back Jordan Amavi, who only managed 12 appearances last season, having suffered a cruciate ligament injury back in November.

The 22-year-old is thought to be highly regarded by Klopp, and his profile fits exactly what the German looks for in his players. He was an instant hit at Villa Park, prior to his season-ending injury.

It should be stressed that Villa have been quick to play down talk of Amavi leaving the club, with owner Tony Xia taking to Twitter to confirm his intention to keep the France under-21 international.

A superb attacking left-back who is also very capable defensively, Amavi would be a good signing, and one with huge potential to develop under Klopp.

With Moreno’s inconsistency leading to many Liverpool supporters desperate for a new left-back this summer, Jonas Hector is at the top of many peoples’ list.

The 26-year-old is the complete opposite to Moreno in many ways: steady, unspectacular and very reliable.

He enjoyed an impressive Euro 2016 campaign with Germany, providing intelligent runs down the left flank, a good final ball and expert defensive qualities.

In many ways, he is similar to Nathaniel Clyne in his ability to produce solid performances week in, week out, and he would be a very good capture if Klopp decided to make a move for him.

The 49-year-old doesn’t appear to have shown too much interest in his compatriot, though, which seems rather baffling given his class and likely availability from Cologne.

Should Klopp have a change of heart, Hector would be the perfect arrival at left-back.

Over the past couple of years, few left-backs in Europe have been as influential as Ricardo Rodriguez.

The Wolfsburg man is a very talented footballer, possessing a wand of a left foot that can be deadly from set-pieces.

Still just 23, the Switzerland international may feel that this summer is the right time to move on, following four years at the Volkswagen Arena.

It seems strange that there is not a bigger clamour from the big clubs to acquire Rodriguez’s signature, and Liverpool would be wise to swoop in and make a move for him.

Defensively, Rodriguez may not be quite as savvy as some, but he is still reliable enough in that area, and would bring great quality in the attacking third.

It’s easy for snobbery to play a big part in the minds of football supporters, especially when it comes to downplaying the quality of English players.

Aaron Cresswell may not be the most highly thought-of left-back around, but he enjoyed an excellent 2015/16 season with West Ham, and was unlucky not to make England’s Euro 2016 squad.

He is proven in the Premier League, which acts as a major plus point, and the fact that he was a boyhood Liverpool fan certainly can’t do any harm either.

The 26-year-old would provide good competition for Moreno, and unlike Hector or Rodriguez, he may be relatively content not playing every single week.

West Ham will no doubt be keen to keep hold of Cresswell, as they continue to thrive under Slaven Bilic, but Liverpool could be tempted to test their resolve.

The most recent left-back to be linked with a move to Anfield ahead of the new season is Valencia youngster Toni Lato.

A number of reports in Spain have suggested that Klopp has his eye on the 18-year-old, with enquiries made over his availability.

Given his tender years and lack of pedigree, Lato is not a player that will immediately come into the first team, which will not appeal to many.

Klopp has always advocated youth, however, and if he feels the young Spaniard is ready, he will not shy away from playing him.

It is all just speculation, of course, but Lato is certainly the type of player who Klopp will feel he can help blossom into a top player.

He failed to make a single Liga appearance last season, much like Chilwell in the Premier League, and played just once in total, in a Europa League clash with Rapid Vienna.

Although blessed with searing pace and class going forward, it feels as though Liverpool should be targeting a left-back who is more experienced and proven.