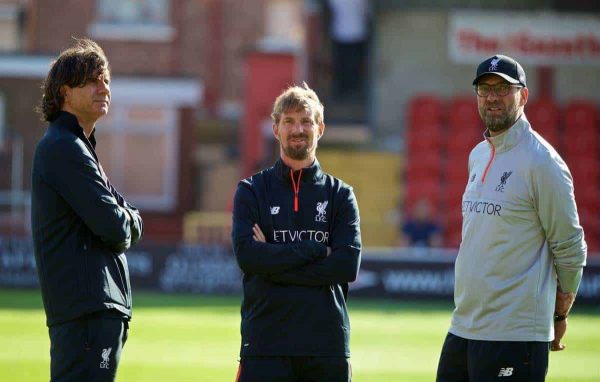 Jurgen Klopp to scour the Bundesliga for centre-back reinforcements – report

Jurgen Klopp‘s pursuit of experienced centre-back cover could lead him to his former battleground of the Bundesliga.

Martin Skrtel has already left to join Fenerbahce, while Tiago Ilori and Andre Wisdom are both poised to depart.

Klopp was said to be looking to add an experienced option as backup to Lovren and Matip, with Sakho and Gomez set to miss the beginning of 2016/17 while they recover.

According to Goal’s Melissa Reddy, this is likely to see him turn to the Bundesliga.

Furthermore, this is set to be a left-sided option, who would “only fill in when required rather than challenge the current options at the heart of defence.”

Klopp has already turned to the Bundesliga to sign Matip and Loris Karius, while 39-year-old goalkeeper Alex Manninger, formerly of Augsburg, is currently on trial at Melwood.

The Liverpool manager could well find his options thin, with no specific targets named at this stage.

One player who is unlikely to make the move to Merseyside is Klopp’s former Borussia Dortmund stalwart Neven Subotic, who is poised to join newly promoted Middlesbrough this summer.

Aitor Karanka’s side have seen an offer of around £8 million accepted by Dortmund, with the Serbian likely taking up a key role at the Riverside Stadium.

Klopp will lose Ilori to Olympic duty during pre-season, with the 23-year-old called up to Rui Jorge’s Portugal squad for the tournament.

Any further injury to the likes of Matip or Lovren would intensity Klopp’s search, with Brazilian midfielder Lucas Leiva an auxiliary option in a worst-case scenario.