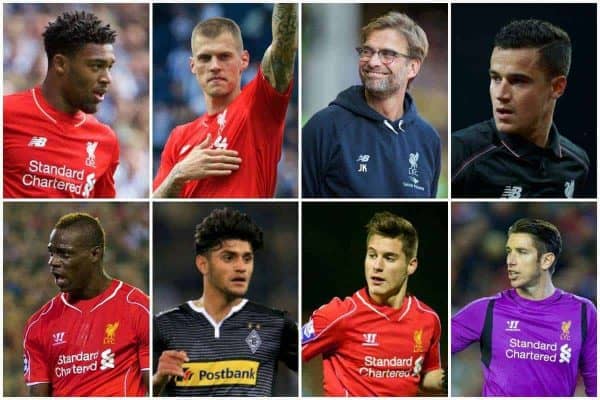 We round up the latest Liverpool transfer news, as Jurgen Klopp‘s busy summer window continues.

Klopp is spending Thursday preparing his side for their first pre-season friendly away to Tranmere Rovers at Prenton Park on Friday night, but the club remain busy in the transfer market.

Following the signings of Marko Grujic, Joel Matip, Loris Karius and Sadio Mane, the Reds’ focus seems to have turned to ensuring a number of big-money outgoings.

Here’s the latest Liverpool transfer news, including a £15 million offer for Jordon Ibe.

Following the signing of Mane from Southampton for £30 million, the futures of a host of Liverpool’s attacking talents have come under question.

Mane will likely compete with Adam Lallana, Lazar Markovic and Sheyi Ojo for a starting role on the right-hand side of Klopp’s attack, but one of the Reds’ regular wingers from 2015/16 could be set to leave.

According to widespread reports, Bournemouth have seen their £15 million bid for Ibe accepted, with the 20-year-old poised to replace Matt Ritchie in Eddie Howe’s squad for 2016/17.

Due to a 15 percent sell-on clause in Ibe’s contract, his former club Wycombe Wanderers are due to receive £2.25 million of the fee.

Joining Ibe through the Anfield exit this summer is likely to be Slovakia captain Martin Skrtel, who is inching closer to a move to Fenerbahce following his country’s exit from Euro 2016.

The Turkish Super Lig side confirmed that they had entered talks with the 31-year-old on Thursday afternoon, after Liverpool accepted their £5.5 million bid.

Skrtel is behind Mamadou Sakho, Dejan Lovren, Joel Matip and Joe Gomez in Klopp’s centre-back ranks, and is set to end an eight-and-a-half-year stay on Merseyside.

While Klopp is busy remoulding his squad ahead of his first full campaign as Liverpool manager, owners John W. Henry and Tom Werner are busy preparing a new contract offer for the German.

Klopp still has two years left on his current deal, with the option of adding another year, but Reds bosses are reportedly keen to extend this even further.

The 49-year-old is said to be eager to extend his terms, and having spent seven years as manager at both Mainz and Borussia Dortmund, he looks set to remain at Anfield for the foreseeable future.

Much of Liverpool’s outgoings this summer are set to be comprised of the deadwood in Klopp’s squad, but one potentially damaging departure continues to loom in the form of Philippe Coutinho.

According to Goal Brazil, Coutinho’s new representatives, Kia Joorabchian and Giuliano Bertolucci, are chasing the “great goal” of sealing the midfielder’s move away from Anfield.

Barcelona and Paris Saint-Germain have been linked with Coutinho in recent months, but Liverpool are believed to have “no interest” in negotiating the 24-year-old’s sale.

Out-of-favour striker Mario Balotelli returned to pre-season training at Melwood at the beginning of July, but there remains considerable doubt over his future under Klopp.

The Italian is likely to leave Liverpool this summer, but with the likes of AC Milan and Besiktas ruling themselves out of the running, he may be left with few options—one being Serie A newcomers Crotone.

“I’ve got to admit that I have called his agent Mino Raiola to talk about Balotelli,” Crotone president Raffaele Vrenna said this week. “Crotone has the ideal surroundings for a young talented player to grow and show himself off.”

“We could be the right place to relaunch an incredible talent like Balotelli, who has unfortunately had a couple of seasons which were not particularly inspiring.”

After sealing the signings of Grujic, Karius, Matip and Sane, Klopp’s attention has switched to bolstering his midfield ranks, with Udinese’s Piotr Zielinski and Borussia Monchengladbach’s Mahmoud Dahoud his primary targets.

But with deals for both players stalling in the first week of the summer transfer window, Klopp may be forced to look elsewhere in his search for reinforcements in the middle of the park.

Dahoud is said to be in favour of a move away from Gladbach, despite the Bundesliga side offering him a new contract.

But speaking this week the 20-year-old admitted “I only focus on the moment,” before continuing to ask “who says that I have to leave Monchengladbach?”

Liverpool have accepted two bids for 19-year-old winger Sergi Canos, with both Bristol City and Norwich City confirming their interest in the former Barcelona youth.

But while Canos is said to favour a move to Carrow Road, Robins manager Lee Johnson isn’t giving up hope of convincing him to make the switch to the West Country just yet.

“It’s a player we’re interested in—that’s no secret,” he told the Bristol Post, “but a lot of things have got to go on to be able to get that one through.”

Meanwhile, Liverpool are pushing to include a buy-back clause in any deal for Canos, as they look to secure the long-term future of their best young players.

Jones to Join Kuyt at Feyenoord

With goalkeeper Brad Jones training with Klopp’s squad in the early days of pre-season, some supporters may have suspected a return to the Liverpool books for the Australian.

But after proving his fitness at Melwood, the 34-year-old has signed a one-year deal with Eredivisie challengers Feyenoord, joining ex-Reds forward Dirk Kuyt.

Feyenoord manager Giovanni van Bronckhorst was searching for cover for injured stopper Kenneth Vermeer, who ruptured his Achilles tendon this week, sidelining him for the rest of the year.

Following his excellent season with NEC in 2015/16, Jones arrives as the ideal replacement.