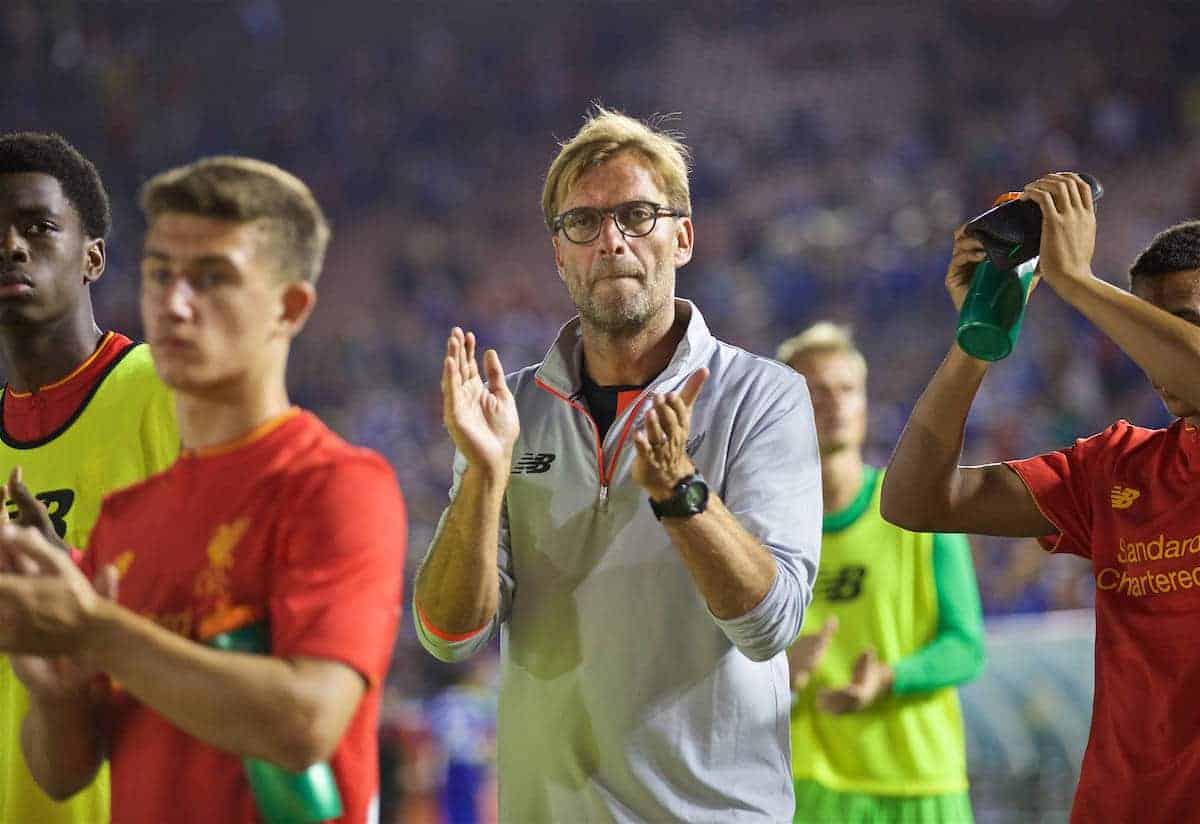 With five of Liverpool’s nine pre-season games done and dusted, Jurgen Klopp now reaches the business end of the summer.

The Reds’ most recent outing saw them beaten 1-0 by Chelsea at the Rose Bowl in Pasadena, in what was a spiky affair from start to finish.

It was Liverpool’s first defeat of the summer so far, with Gary Cahill’s header also the only goal Jurgen Klopp‘s men have conceded to date.

While the five pre-season games have seen plenty of positives, from new signings impressing to youngsters being given a chance to shine, the serious stuff starts from this point on.

The Premier League season is now just over two weeks away, and Klopp will be looking to have his plans perfected for the trip to Arsenal on August 14. For the majority of the summer, Liverpool have had to make do without a number of regulars being a part of the squad.

Euro 2016 commitments have seen a clutch of key men take their summer holidays later than others, and only now are they all returning to club duties.

While it has been pleasing to see the likes of Trent Alexander-Arnold, Cameron Brannagan and Ovie Ejaria blossoming, it is clear that they are unlikely to play much of a role in 2016/17.

Their involvement should now decrease heavily, paving the way for their more illustrious teammates to take to the stage.

English trio Jordan Henderson, James Milner and Adam Lallana made their return against Chelsea, but Nathaniel Clyne and Daniel Sturridge are still yet to feature.

The same applies to fellow key players Emre Can and Divock Origi, both of whom have been left to work on improving their fitness levels.

New signing Georginio Wijnaldum is another who is waiting for his debut, while Ragnar Klavan only made his first Reds appearance against Chelsea.

Only when everyone is back, and in good enough shape to feature, will Klopp be able to work on his best possible side moving forward.

The German is starting to build a formidable squad, having brought in the likes of Wijnaldum, Loris Karius, Joel Matip, Marko Grujic and Sadio Mane.

He will no doubt have an idea of who he sees being fixtures in his starting lineup this season, but he will learn so much in the next four games.

System-wise, he still has decisions to make, too, whether it be his trusted 4-2-3-1 formation or the 4-3-3 that has been used heavily of late.

Against Chelsea it proved to be the latter, but the Reds were unable to find fluency in any area of the pitch, as Antonio Conte’s hardworking unit stymied their opposition across the park.

Putting this behind him, the next couple of weeks are crucial in Klopp finding a specific role for each player.

At centre-back, the 49-year-old will be keen to build a partnership between Matip and Dejan Lovren—his expected pairing for the start of the season.

A cohesive midfield unit is also of paramount importance, and Can, Henderson, Milner, Wijnaldum and Grujic will all feel they are worthy of a place in the team. Likewise, the battle to start in attacking areas is also hotting up, with Mane, Origi, Lallana, Sturridge, Philippe Coutinho and Roberto Firmino all worthy of playing a starring role in the final third.

Klopp has not been able to work fully on any of these details so far this summer, as Liverpool shake off their pre-season lethargy.

After going through the motions in domestic friendlies, with key players returning Klopp’s squad must work to translate their training-ground efforts onto the pitch.

The importance of a fast start to the Premier League season should never be underestimated, and the remainder of pre-season provides Liverpool with the perfect opportunity to be as fit and firing as possible.

Next up is a clash with AC Milan in Santa Clara, in the early hours of Sunday morning, before they take on AS Roma at Busch Stadium in St. Louis, Missouri on August 2.

Liverpool then return home to face the mighty Barcelona at Wembley Stadium a week on Saturday, and they finish off their relentless pre-season with a game away to Klopp’s former club Mainz a day later.

We should expect the young players to appear less and less in that time, and for a set team to take shape as the games progress.

There will still be the usual changes made during proceedings, of course, but a clearer identity will become more apparent, compared to the first half of the summer.

The defeat to Chelsea was very much the last game with the fringe squad used, and from this point on, the famous faces will be back out in force.

Getting their fitness levels up to scratch, and giving them some much-needed playing time, now becomes priority for Klopp.

The approaching quartet of fixtures will provide us with plenty to insight into Klopp’s thinking ahead of the new campaign.