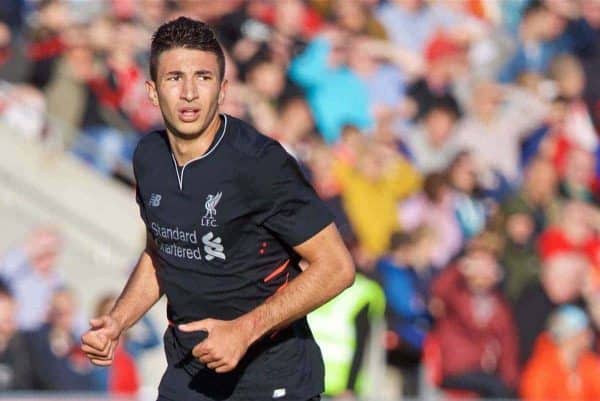 New signing Marko Grujic made his Liverpool debut in the Reds’ 5-0 friendly win over Fleetwood Town, showing glimpses of his talents in a box-to-box role.

Liverpool continued their positive start to pre-season breezing past the League One side with an emphatic 5-0 victory.

The Reds dominated from start to finish at the picturesque Highbury Stadium, where goals from Grujic himself, Ben Woodburn, Lucas Leiva and a brace from Roberto Firmino capped off another productive workout.

Klopp gave all of his squad a run-out in Lancashire, naming separate XIs in each half once again, with this early stage all about easing back into match practice and improving fitness levels.

That saw Grujic come in for his Reds debut and enjoy a starting berth in midfield, where the youngster hit the ground running with an impressive 45-minute display, and a deserved debut goal.

Having missed Liverpool’s pre-season opener at Tranmere Rovers, the Serbian midfielder was always going to take part at the first available opportunity.

At a sun-drenched Highbury, Grujic, an instantly striking presence in the middle of the park, featured as part of Liverpool’s three-man centre.

The imposing 20-year-old lined up alongside Trent Alexander-Arnold, starting after an impressive second-half display at Prenton Park in assisting Danny Ings’ winner, with the duo operating ahead of defensive shield, Kevin Stewart.

With Stewart anchoring in front of the defence, looking to keep things simple and ticking over, Alexander-Arnold was deployed in an energetic roaming role, linking play in channels with attackers Lazar Markovic, Sadio Mane, and Ings.

This left Grujic operating from left-centre in the freedom of a box-to-box role—able to impose himself both defensively but mainly as the midfield driving force, such was the balance of the game.

It was a role the new recruit clearly relished, as he caught the eye with an encouraging maiden outing for Klopp’s side—one which will certainly have pleased the Liverpool boss.

His display indicated as such as he settled straight into action, stroking the ball around nicely and displaying some neat touches in the opening exchanges.

Grujic offered a real dominating presence, with which he ran the physical battle and his area of the pitch—albeit against a dwarfed opposing midfield—while also covering ground to press the ball as he put himself through the paces in his opening workout.

With Alexander-Arnold marauding to support the attack, Grujic enjoyed the space afforded to drive forward with and without the ball, and it was from this that he made his first meaningful contribution in a Liverpool shirt.

Winning possession in Fleetwood’s defensive third, Grujic drove at the home back line, displayed some sharp footwork with a clever step-over, before bursting into the box where he was fouled for a penalty, which Ings saw saved.

Though coming against some questionable defending, Grujic’s power and athleticism was instantly displayed, and it also perfectly reflected the ability he boasts that prompted Klopp to label him a “great technician” before kick-off.

In a box-to-box role, contributing offensively is only one half of the job, and while not seen too often such was Liverpool’s dominance, Grujic showed promising signs in his willingness to do the ugly side.

Though not against the level of physicality associated with the Premier League, he used his commanding frame and vast upper-body strength to good effect on a couple of occasions, shrugging opponents aside in Liverpool’s half and in enemy territory to reclaim possession.

Fleetwood posed little attacking threat but when on a rare attempt to break, Grujic showed he can take a challenge too—rising straight back to his feet after taking a heavy tackle from ex-Reds youth-teamer, Jimmy Ryan.

But perhaps most pleasing of all was his want to not only get the ball moving and spring another attack, but his desire to break forward and contribute to developing offensive play.

Grujic has become known for his ability to drive his team from midfield, and he gave an encouraging demonstration on Wednesday.

His domineering 6’3″ frame and composed but impactful style caught attention, but it was Grujic’s ability to influence attacks with his forward running and technical ability that really shone.

His willingness to find goalscoring positions was evident throughout, even from the opening minutes when he met Jon Flanagan’s cross with a header that flashed wide.

Further displayed by winning the early spot-kick, the No. 16 also showed a welcome nous when arriving, rather than driving, into the box, from which he opened his Liverpool account.

Running into a packed Fleetwood penalty area, Grujic intelligently diverted his run and ghosted to the back post, where he controlled Alberto Moreno’s cross and slotted home his first for the club—a moment he described as “a dream come true.”

He nearly added an instant second, hitting the post from a tight angle after breaking from midfield once again and latching onto Lazar Markovic’s threaded pass, and he later saw a well-struck drive saved as he arrived perfectly timed at the edge of the box.

Grujic could have doubled his tally on a hugely positive first outing in front of Klopp, who was pleased but played down the impact of his first outing.

Klopp is right to temper the midfielder’s debut with it only coming against a League One side in a friendly, but the early signs over what Grujic can bring to Liverpool were promising.

The Serbian will hope for more of the same throughout pre-season preparations as he settles into life at Anfield.