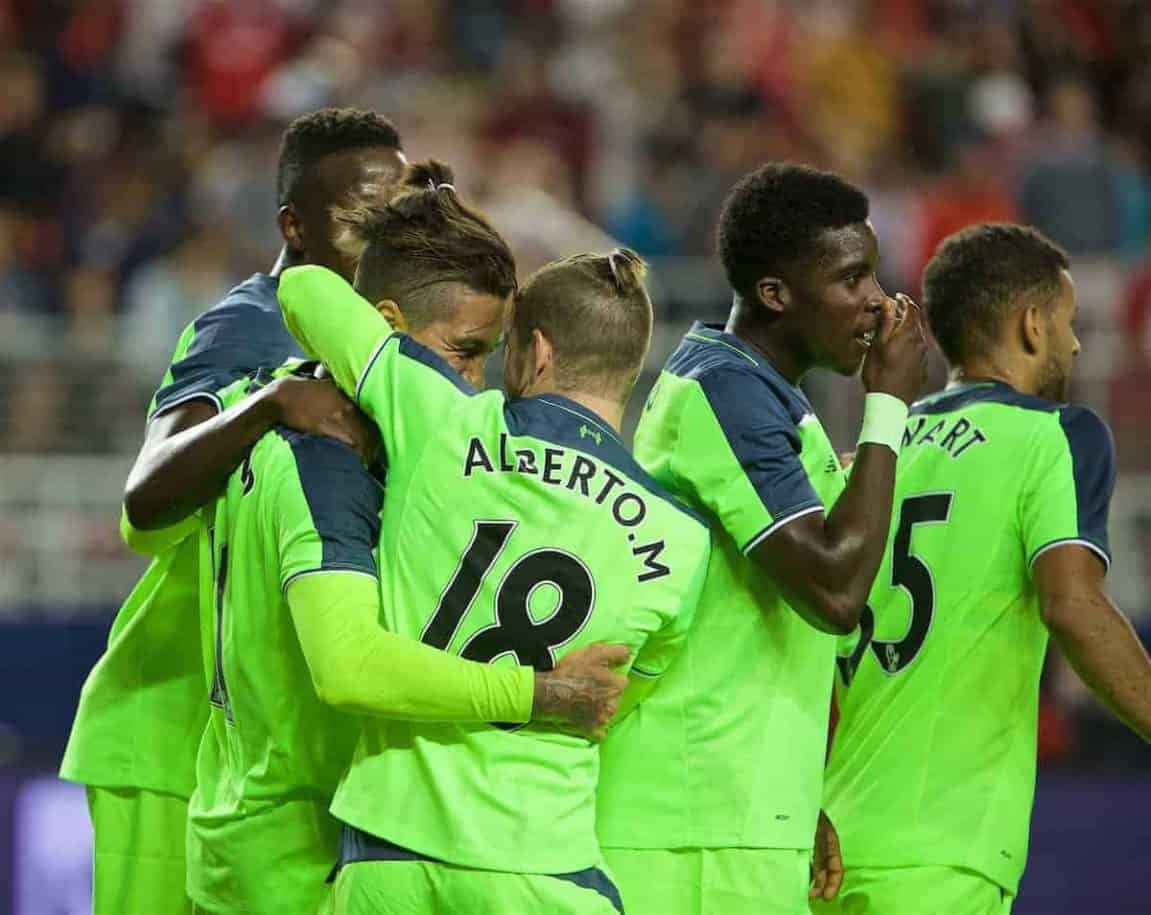 Liverpool got their first win of their US tour after a commanding performance against AC Milan ended in a 2-0 victory—and there was lots to talk about.

Divock Origi and Roberto Firmino provided the goals as Liverpool won their sixth pre-season game at the home of the NFL’s San Francisco 49ers.

It was a starting lineup bursting with intent and versatility as Jurgen Klopp‘s quest to find Liverpool’s strongest team continued.

Origi, Daniel Sturridge, Simon Mignolet and Nathaniel Clyne, Divock Origi made their first appearances for the Reds during pre-season, after their summer holidays.

There was also a glimpse of youngster Sheyi Ojo and a strong midfield performance from new signing, Georginio Wijnaldum.

Here are just five talking points from the game. The Belgian international had a quiet European Championship tournament, barely featuring for his side, but after enjoying a deserved break, Origi returned to action during the second half of Liverpool’s pre-season clash.

It was a return which excited, too, as Origi’s intelligent runs ignited the spark Liverpool needed throughout much of the first half.

It was his opening goal which set the game alight and it was a goal that boasted class and composure.

Origi smartly controlled an inviting lobbed pass from Alberto Moreno before sidestepping his opponent and producing an assured finish which curled into the right-hand corner of the goal. It signified a hungry player who was eager to put his mark on the game and to push for a position in the starting lineup.

The arrival of Sadio Mane and the return to fitness of Danny Ings has provided more competition for an attacking role and so far, it’s Sturridge who looks behind the pack.

Origi’s 45-minute cameo was as impressive as Ings and Mane’s commanding performances so far but Sturridge looked rusty and a little off the mark in his first appearance.

The England international will be hoping to impress against Roma but in San Francisco, it was Origi who received the deserved plaudits.

It wasn’t just Origi who grabbed the headlines: he was joined by Liverpool youngster, Ojo, who returned from international duty after impressing for the England U19s squad in France.

Ojo’s pace was blistering and his ability to run the length of the flank proved effective in the lead up to Firmino’s goal. The youngster’s assist marked an impressive short display and Ojo has certainly given himself a chance to be considered by Klopp for the 2016/17 campaign.

He’ll have tough competition though; Mane, Ings, Origi, Sturridge, Firmino, Lallana and Philippe Coutinho all stand in his way for a position in the starting lineup—but after last night’s display, it’s clear the youngster has what it takes to cut it with the big boys.

An important squad role will be likely for Ojo and despite plenty of his younger team-mates being sent out on loan, the England international could remain in Merseyside and as part of Klopp’s plans.

Ojo will likely feature in cup games but his squad inclusion will provide constant competition for the senior players and if the youngster produces more performances like this one, he’ll be knocking on the door.

The squad Klopp has assembled throughout the summer is one filled with attacking flair and intent.

The arrival of Mane signified a fresh face in attack and further goalscoring threat and the recent addition of Wijnaldum has provided even more dynamism in midfield.

The most recent new signing started in a deeper midfield role alongside returning captain, Jordan Henderson, as Lallana played central to an attacking three in front. Coutinho and Mane joined Lallana, as the trio lined up behind Sturridge.

The pitch was full of creativity but the attackers were unable to gel until the arrival of Origi, Firmino and Ojo in the second half.

Nevertheless, this lineup showed a glimpse of what Klopp’s attacking options could be and when the season gets going, it’ll be exciting to see how they all work together.

It’s been a long time since Liverpool had a variety of options in midfield worthy of a starting role but the arrival of Wijnaldum and Marko Grujic this summer has given Klopp options to think about.

Henderson and Milner returned to the frame after international duty and both started, though it was only Henderson who played a midfield role.

The captain played in a deeper position alongside new signing Wijnaldum, with Lallana in front, and the pair looked comfortable; Wijnaldum was prepared to push forward on occasions and drive through the midfield whereas Henderson was happier to sit back and dictate the play.

The starting lineup could be an option but it’s likely Grujic and Can will entre the frame when they return from fitness, and Can is the obvious choice for the deeper role. The German’s powerful runs and passing ability means he fits the role well and is preferred by the fans to start ahead of Henderson and Milner.

Wijnaldum possesses attacking threat and could play in a more advanced role, as can Grujic, but both have demonstrated the ability to be effective from a deeper role too.

Aside from Henderson, who looks limited to the defensive position, Liverpool’s midfielders could line up in a variety of ways.

Liverpool’s England internationals returned to the frame and the club’s vice-captain started in an unfamiliar role as Wijnaldum, Henderson and Lallana were preferred ahead of him in midfield.

Questions have been raised over the roles of Milner and Henderson this season and the 30-year-old started at left-back against AC Milan.

This move suggests Klopp may be looking to use Milner as a utility man and the England international could be used more often as a backup for Alberto Moreno.

The departure of Brad Smith, who joined Bournemouth for £6 million, has limited Liverpool’s options at full-back and Jon Flanagan looks set for a loan spell with Burnley.

The decision to field Milner at full-back signified boldness from the manager, who could be prepared to drop some of his senior players to make way for new signings, Wijnaldum and Grujic.

At left-back, Milner can provide experience, leadership and consistency and would provide an effective cover for the erratic performances of Moreno.

He’s a hard worker and is prepared to make strong tackles, but Milner doesn’t possess the passing abilities or the forward-thinking drive of Can, Grujic and Wijnaldum—and that could prove costly for the England international.