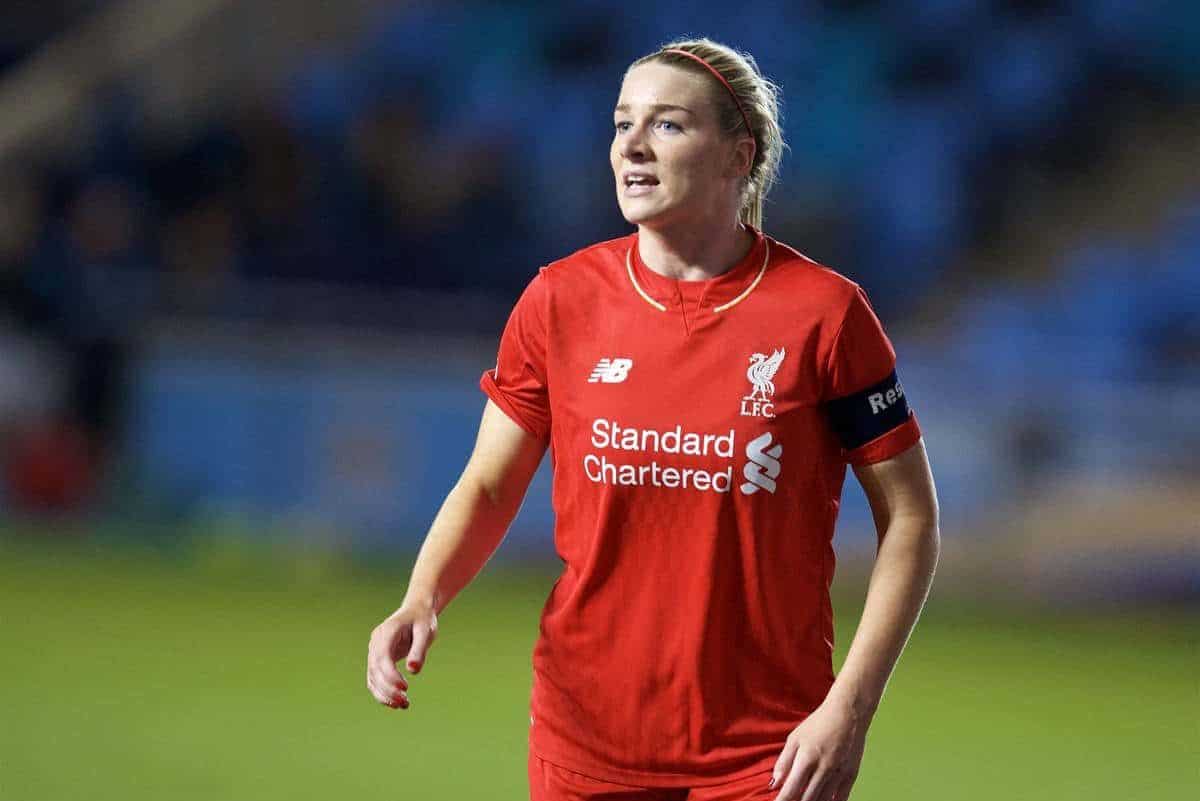 LFC Ladies ended with a goalless stalemate against Notts County on Saturday afternoon at Select Security Stadium in Widnes.

Scott Rogers named an unchanged side, but it was Notts County who started the game brightly. On 3 mins Buet delivered the ball into LFC penalty area, but Chamberlain had no problems with collecting it. Three minutes later Turner crossed to find Ellen White, but the ball was cleared off the line and onto the post.

LFC Ladies had their first real chance to break the deadlock when on 10 minutes Shanice Van De Sanden found herself in one-on-one situation with Walsh who denied the Dutch winger. The resulting corner from Greenwood found captain Bonner who missed the target.

On 13 minutes Greenwood crossed the ball into area and found Weir who had a golden opportunity to score. Unfortunately, the header from Scot went over the bar of Walsh’s goal.

On 26 minutes Laura Coombs delivered a great ball forward to Van De Sanden, but it was Walsh who sprinted quickly to clear the danger away of her area.

The game went into deep midfield battle throughout the first 45 minutes with rare chances from both sides to test goalkeepers Walsh and Chamberlain. Coombs had the best chance to break the deadlock just before half time. Harding beat Notts County defence on the left wing and delivered the ball to Coombs, but her shot went just inches over Walsh’s crossbar.

The second half started as slowly as the first one finished. The first chance came in 53 minutes for the Reds. Greenwood delivered from the corner to White, but her shot was well blocked by Turner.

On 65 minutes referee booked Danielle Buet who cynically fouled Natasha Harding to prevent a promising counter-attack for the Reds.

Then Ellen White found herself unmarked in Liverpool penalty area, but her shot from 12 yards didn’t trouble Chamberlain.

In 70 minutes Charles found herself in the golden opportunity to break the deadlock however, her shot from 6 yards was denied by Walsh. The resulting corner was well defended by Notts County Ladies.

Five minutes later Alex Greenwood delivered a good ball into the area, but her cross was comfortably collected by Megan Walsh.

Coombs tried her luck from 25 yards in 80 minutes, but Megan Walsh produced an outstanding save and denied Coombs’s effort which was destined for the top corner.

The game went into the final stage when Charles found herself a space on the right wing. Her low cross was denied for a corner. White delivered the ball, but Walsh was fouled as a result.

Despite creating more chances in the second half LFC Ladies were unable to beat Walsh and ended with a goalless draw against Notts County Ladies.

Their next challenge will be an away trip to Arsenal on Sunday, 31 July.